Whether it is used for biasing avalanche photodiodes (APDs) found in optical receivers, driving photoflash tubes in flash cameras, or charging high-voltage capacitors, the need for high-voltage sources continues to grow. Consequently, in battery-powered units where the input supply voltage is low, step-up or boost DC/DC converters are required to generate voltages that can be several times the input. To address these requirements, suppliers such as Analog Devices, Linear Technology, Maxim Integrated, and Micrel Inc., among others, have produced boost converters with output voltages at 70 V and above. 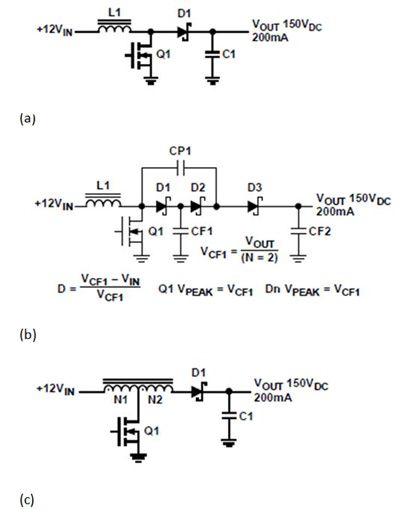 This article examines such solutions and discusses the topologies and techniques used by each to boost output voltages by ratios of 10:1 or better in order to generate high-DC voltages from very-low DC inputs.
High boost ratios
According to Analog Devices’ application note AN-1126,¹ there are several DC/DC converter topologies for obtaining relatively high (>10:1) boost ratios. These include simple boost, charge-pump multiplied boost, and tapped-inductor boost, as shown in Figure 1. While there are many advantages delivered by each topology, these techniques also have noteworthy drawbacks for delivering significant power at large boost ratios.

Figure 1: Traditionally, topologies for obtaining relatively high (>10:1) boost ratios include simple boost (a), charge-pump multiplied boost (b), and tapped-inductor boost (c) (Courtesy of Analog Devices).
Per ADI’s application note, with high boost ratios, simple boost imposes both high-voltage and high-current stress on MOSFET Q1, which results in high switching and conduction losses. High voltage on the rectifier also prevents the use of efficient Schottky diodes. Similarly, with charge-pump multiplied boost topology each charge-pump multiplier stage requires two added series diodes, which contribute to loss from forward-voltage drop. In addition, the pump capacitors must be large in value to avoid causing high peak currents and significant cyclic droop. High peak currents also are likely to increase rms switch current, which tends to corrupt current-mode control waveforms.
With tapped-inductor boost topology, the voltage stress on the output rectifier is high, and it suffers from the effects of transformer leakage inductance, according to ADI. This leakage inductance causes voltage spikes and ringing, which, in turn, causes EMI and increases voltage stress on both the MOSFET and the output rectifier. Although such effects can be controlled with snubbers, it wastes power and results in additional components and board space.

Improved topology
ADI’s application note AN-1126 proposes a new converter topology that overcomes the drawbacks of conventional topologies to deliver significant power at large boost ratios with minimum voltage and current stress imposed on the switches. This allows moderately rated MOSFETs and Schottky rectifiers to be used while operating at moderate duty cycles for easier continuous-conduction-mode (CCM) and PWM control. Additionally, it avoids voltage spikes and ringing associated with transformer leakage inductance.

Hands on with the Light Blue Bean

We took a look at Punch Through Design’s Light Blue Bean back when the board was called the “Cortado” and...