The one thing that probably scares people off in attempting to build one of these light matrices is the somewhat tedious task of soldering all the LEDs together.  Similarly, if you are trying to build a 3 dimensional LED matrix , even a simple 3 x 3 cube, it requires more patience and skill in soldering together the individual LEDs.

You can buy LOL(lots of lights) shields or prefab LED matrix units but they don’t allow you to expand where the LEDs are placed. With this, you can make giant or bigger Game of Life, Pong, Daft Punk Table displays a whole lot easier.

My idea is to do all the wiring on a circuit board and just plug in the LEDs.  This allows you to place the LED matrix wherever you want and on whatever you want  to use as a substrate.  The LEDs would just have a length of extention wire cabled back to the plug-in point.  This would allow you to construct soft circuit garments like having a daft punk grid on the back of a jacket or attach up to a grid embedded in a couch cushion.  This method would also allow me to embed the LED in things like pingpong balls or bigger glass spheres or bottles to use as a diffuser. Build the art piece first and then place the lights.  Routing the LED light cables would not be confined to the matrix pattern needed in a hardwired setup. 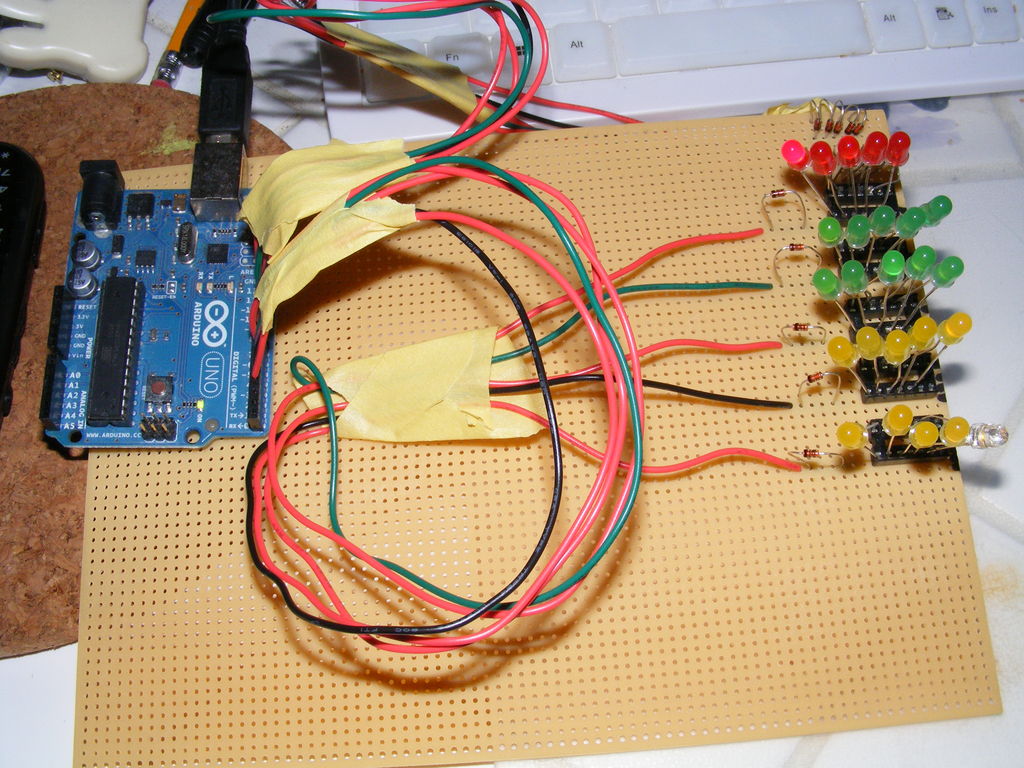 This technique will be used with Arduino Sew Easy Wearable Shield.

CAUTION: Learn how to solder safely and work carefully with electronic components.

LEDs diffused with two double layer of T-shirt.  Need to spread the light with batting and block in for individual cube lights.

First, you need to understand how to read electronic circuit schematics.Get your components together.  I initially had 100 ohm resistors soldering in and went back to the ible to find I should be using 15 ohm resistors because I had built the configuration with the zener diodes for voltage leak protection so I could use any LED.

We want to simplify the matrix wiring.  Connections along a single conductor are soldered to a “buss”.

Instead of hardwiring up the circuit, LED to LED to components, we just need to substitute an entry point for the two LED leads.  When you are dealing with 25 LEDs in this case, there is bound to be a bad LED or a bad solder joint can be hard to discern.

I wanted to use headers just like on the Arduino because you can get leads with a plastic collar to push into breadboards.  You can solder the LEDs on to a pair of leads.  Headers seem expensive relative to the shipping costs.

I was thinking getting custom connectors but that seemed expensive too.   It would be too much trouble to salvage something like an IDE connector off a motherboard and use an IDE ribbon cable to hook up the LEDs.

I also thought about using RJ-12 telephone cable to hook up the LEDs, RJ-45 to wire up those RGB surface mount LEDs.  It would be easy to crimp the connector on one end and solder the LED on the other.  But…keystone jacks come out to $2 a pop so doing this project would be way over budget.  A punch down panel, terminator strip or a wire wrapping block would work if you have one to spare.

I browsed through Radio Snacks and they did not have any headers.  I then saw the closest thing was IC sockets.  It might work.  I got the 14 pin ones since I might need some other connections wired up.  I used 5 separate IC sockets to approximate the layout of the matrix  for ease of wiring and reference instead of using a larger and longer connector.

With a little planning and analysis, the bottom side of the IC socket will be the ground rail and I would have to jumper the vertical runs.

Play around with spacing the components on your perfboard. 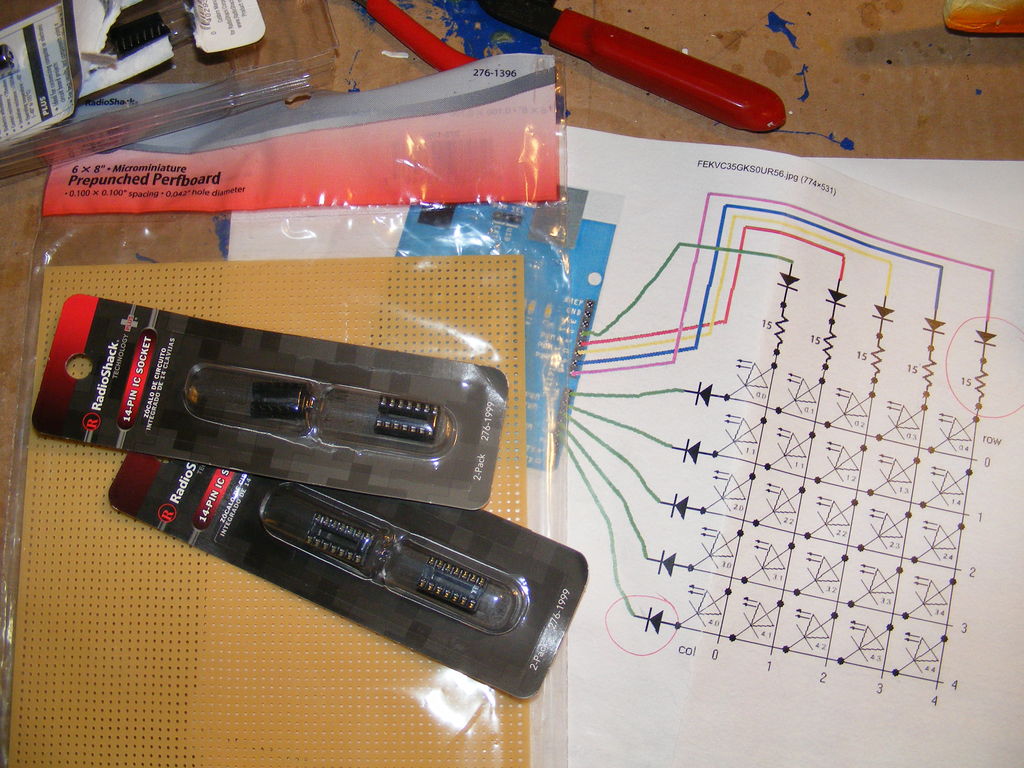 Tack down the IC sockets by first soldering the buss bar that goes across the bottom pins.  I just used a stripped length of hookup wire as the buss bar.  You may want to slightly bend a few pins or tape the sockets down so you can flip the entire perfboard over.  Or use a piece of cardboard to cover and flip over just like getting a cake out of a cake pan.

Realize you are connecting on the back side of the circuit board so wire up accordingly.

Cut the jumpers to length and strip  the ends.

Solder methodically, actually, see how good you are at manipulating the tip of the soldering iron. Scrape off any burnt gunk from touching the insulation on nearby wires.