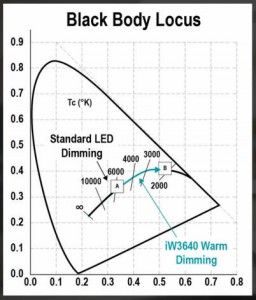 It works by producing a PWM signal that gradually increases its duty-cycle as output current is reduced. A set of white LEDs is fed directly from the converter output (see diagram) while a set of amber LEDs is fed from the same output, but modulated by the PWM signal via a mosfet.

In this way, the light output becomes more amber as the light is dimmed.

Various dim/CCT characteristics are possible by altering the number of LEDs in each string, and the arrangement of strings (see diagram below).

“Built-in digital dimming detects the dimmer type and phase, automatically adjusting LED colour mixing in step with light intensity to provide smooth dimming that closely matches the warmth and ambiance of a traditional dimmable incandescent bulb,” said Dialog. “The result is a much more intimate LED lighting experience in residential and commercial settings, where lighting plays an important role in setting the mood.”

Dimmers vary considerably in quality, and dimmer compatibility is a big issue with dimmable LED drivers.

This example shows you how to monitor the state of a switch by establishing serial communication between your Arduino and your computer...