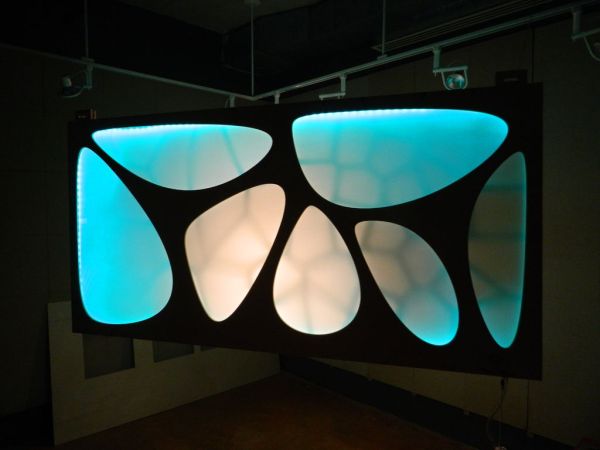 This was an artistic piece installed for a digital fabrication show at the University of South Florida School of Architecture and Community Design. While this brief is specific to this panel, my hope is that the ideas presented here, will inspire you to come up with  your own creation. I am hoping to do a new panel system which maintains constant air, thus doesn’t deflate and is a closed system which will become a drum wall, or playable wall.

My goal for this project was to take an object which was conceived in the computer (3D) and make it real. Using a computer program called Rhinoceros (Rhino) and a plug-in called Grasshopper,  I designed a simple cluster of Voronoi cells (bubbles). Using a CNC machine, I cut two different patterns out of 1/2” plywood. Between these two panels, I made an air chamber using flexible latex . Air is pumped into this chamber and the latex membrane expands. Since the frame is rigid, the latex expands around the cut outs in the panel, creating a rich 3D surface. I used an Arduino and solid state relay to control a blower which pumps air into the system. Simple blink script turns relay on/off on a timed sequence.

I used a CNC router and advanced computing to design and fabricate. However, you can come up with your own pattern on a piece of paper and layout the deign on the wood itself. Then, using a jigsaw cut the panel forms out manually.

What Does It Do? Applications?

The concept, while simple, has many potential applications. For example, this system can exist as a wall panel(s) or a ceiling panel(s), serving as a focal point in a room, say, at a bar or nightclub. One can think of the object as an art installation, or sculpture. It is interactive, lights-up, and is quite fun to play with. Would be a really cool wall in a kids playroom, hotel lobby, casino, club.

I have been tinkering with the idea of  applying the concept as a means to circulate air through a building, or as a responsive skin for a building facade. One can imagine a system by which air/gas trapped in the bubbles expands when exposed to heat and allows the building to change its skin throughout the hours of the day in response to ambient temperature. These are just some of the applications I have considered. This panel is essentially a sculptural piece, made to experiment with some ideas and materials. However, there are many applications for the panel.

Total Cost was about $300. However, I could have done this much cheaper.

In place of expensive latex, you could use something as basic as visqueen, which is just plastic sheeting used in construction, which you can get at Home Depot. You won’t get the same results, but it should inflate. I have also been told this could be done with poured latex. The membrane just needs to be air tight. Unless you use a latex/rubber materials, you won’t be able to “play” the wall however. OSB or cheaper plywood could be used in place of more expensive birch plywood.

You don’t need an Arduino. I used one to turn the air on/off. Air fills up the chamber (takes about 2 minutes) and stays off for 10 minutes, which is the time required for the panel to deflate 100%.  A simple blink script trips the relay. I set my timing to match the properties of the panel, so yours may be different depending on leakage and size.

I don’t want to get into too much detail about the Arduino scripting, as there are a ton of tutorials on the subject. That said, if you want to use an Arduino to control a relay (and thus the systems supply of air) I used a simple blink script. I adjusted the timing (which is in milliseconds) in the script to control the period. A value of 1000 = 1 second. Through trial and error, I got the timing where I wanted it and altered a base script accordingly.

Using a solid state relay, I followed a simple tutorial to wire the relay into an extension chord. You can look here to see the tutorial I followed. http://www.glacialwanderer.com/hobbyrobotics/?p=9 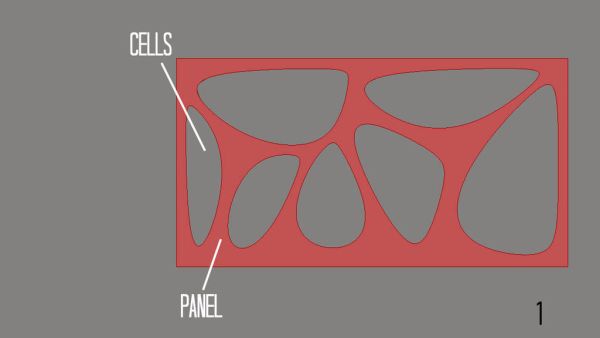 Since this is not a 3D/computer design site, and you will not likely be using Grasshopper, I’ll be very brief on this point. You could easily draw your own pattern in a CAD program, like AutoCAD or trace a pattern by hand on your plywood. Image 1 shows my design for one of the sides.

Basically, I set the dimensions of my panel (4′ x 8′) and contained the cells inside this panel, making sure not to put holes too close to the edges. The system is doubled sided, with each side having a different pattern. This was done for experimental reasons. The side with the smaller cells did not perform very well. This is mostly due to the larger cells on the opposite side which the membrane favored as it inflated. Now I know for the next version.

Patterned Panel(s) – The surface(s) which you will cut out the holes from will serve as the front part of the system. The latex will expand through these holes.

Air Chamber Frame (For double sided version) – If making this panel double sided, you will need to cut out or otherwise fashion a frame. The frame should be about 2-3 inches wide and match the dimensions of your panel. See Image 2. The end result will have an inner frame with latex on two sides and the patterned panels attached to this frame. Image 3 shows the assembly of the system.

From here on, I will discuss the two sided version of this panel system (what you see here). However, you can make this one sided by using one latex sheet and altering the panel assembly a bit.

Again, I used a CNC router (see video) to cut out the cells and the frame. The result was two panels, each with a different pattern. A third piece of plywood was cut out to make a frame, which looks like a large picture frame. This piece gets sandwiched in between the patterned panels.

Alternatively, you can use a jigsaw in place of CNC. Drill a hole in the cells (area that will be removed) and use this hole as your entry point into the wood. Use jigsaw to carefully cut out your pattern.

It is important to sand down your edges. The latex will be coming into contact with the wood on the lip of each cell, so make sure to sand the edges down until smooth. The latex will be fairly resistant to abrasion, but not to sharp corners.

Wherever you plan on bringing the air tube into the panel, you’ll need to cut a gap in the middle frame to allow the tubing to come up and into the chamber that will be created. See Image. My slot is only as wide as it needs to be (dim. Of the tube being used to supply air, plus a little). This slot will need to be sealed with caulk prior to air infiltration.

This cut will also serve as the connection point for the lighting. The LED strip has a connector at the end for the plug that goes into the wall. This slot is where the connector needs to hang out of a bit. See Image.

Using sticky-back grip of the LED strip, line the frame with the LED lights as seen in image. I added additional tape to secure the lights better. Killer Red (dbl. Sided tape) works great for this. It sticks to anything and was essential for me to be able to make latex stay in place. Regular dbl. sided tape would not have worked very well at all. Make sure the end of the strip is at the slot you cut in the frame in previous step. My lights change colors!

With the panel sanded and ready to receive the latex backing, lay a frame out flat and line the perimeter border with the double sided tape, leaving masking on the upside. When ready to place latex, peel off the masking so the tape is now ready.

Carefully lay the latex over the frame and press the rubber against the double sided tape. You may need two people for this. I used a board and clamps to make sure the tape got a good hold on the latex. I put down some glue as well, but this seemed pretty useless. Tape worked fine.

Make sure to cut down latex to size of panel or a tad bit smaller prior to this.The tighter the latex across the frame, the more pressure the system will need to inflate. I made my latex the same size as the panel, so it was fairly loose. That way, I needed much less air/pressure to make the chamber expand.

The theory behind this is that the two outer panels will sandwich the inner frame (air chamber) and once screwed together, will be tight. The friction and pressure of screwing in the outer panels, will give additional grip and prevent the latex from loosening up. Despite being under pressure, this method works! The latex never pulled away from the edges.

With the air chamber assembled, you need to attach the patterned panels. I tried to use heavy duty wood glue for this. It didn’t work. The latex wouldn’t take the glue. So again, I called on my trusty Killer Red. Running strips of tape along the edges of the latex, I pressed the patterned panels into place. Again, I used a board and clamps to make sure the wood was pressed tightly against the inner frame and latex.

I tested the hold, and it was pretty good. However, the whole assembly needs to be mechanically fastened with screws to ensure tight fit and that the inner chamber will hold air. Using regular wood screws, I ran a bunch along the perimeter of the assembly.

To make the system more air tight, you will need to run silicone / caulking along the joints around the perimeter. In order for the chamber to inflate, the system must be closed. However, air will need to escape the system in order to deflate. The crude method described is not “air tight”. It is closed enough to allow for easy inflation, but allows the air to bleed out over time. I have determined that most of the air leaked out from the slot was where the air tube enters the assembly.

If you have massive leaks, add more caulking and check your latex. With some soapy water, you can wet the edges of the panel when pumping in air to test for smaller leaks. My construction of this panel was very sloppy and prototype like. However, I did not have that bad a time making it tight. With proper planing you will likely get better results.

Let’s put together a pixel strip with an HL1606, an Arduino UNO and the Spectrum Shield to build a seven...