It’s not often that I finish the various small projects I undertake. Tesla coils, mass spectrometers, automated tomato plant watering systems, homebrew heaters have all been conceived and sometimes parts bought and assembled with some even making it as far as working. This project however made it all the way to finished.

Torchy Oriole Bike Light
I wanted to do some night mountain biking on the moors above my home and for that a light was required. I bought a Torchy Oriole for £40 from Mr. Torchy’s shop on eBay based on the strength of some reviews I’d read and the price; £££ of Hope or Exposure lights was a bit out of my budget. I’ll be writing a mini review later once I’ve had more chance to test it in anger. 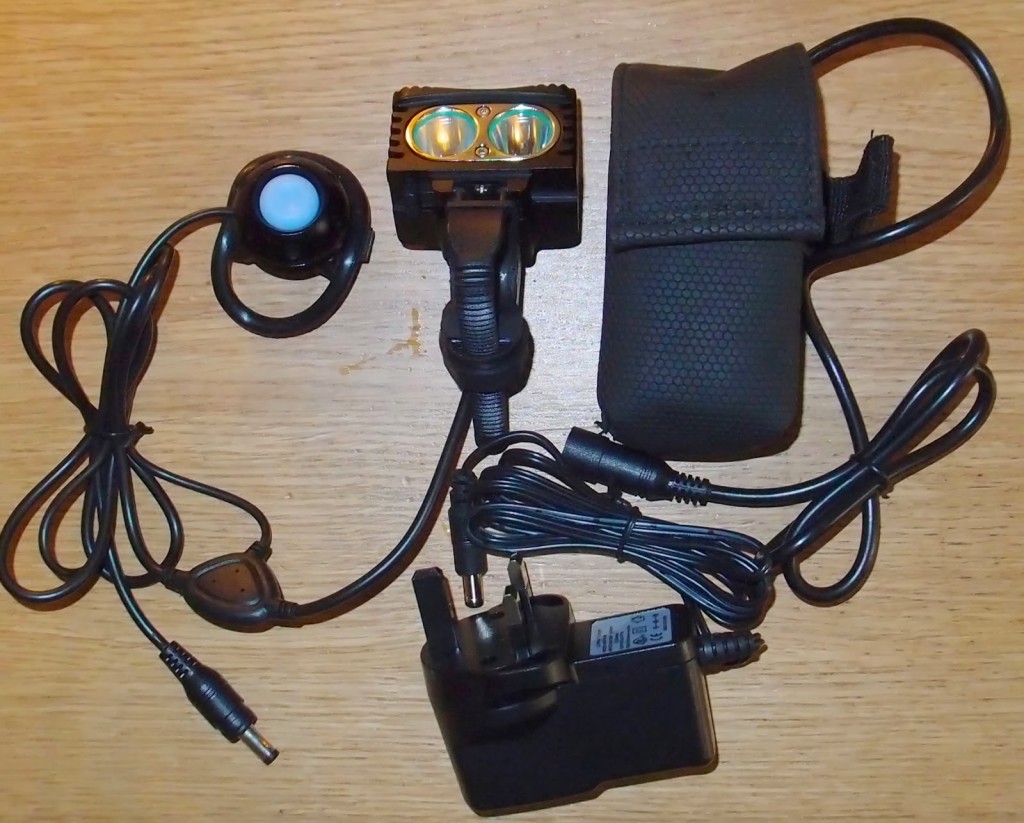 Torchy Oriole bundle (image courtesy of Mr. Torchy)
The main issues I had was the on/off/mode button was not debounced – switch contact bounce caused multiple button presses to be registered by the controller. So a single button press can cycle through two/three modes. Annoying.
Also, the “strobe” mode on the light was an epilepsy inducing 8-( super bright flashing mode that would only serve to annoy motorists and have no use on the trail. Also annoying.
Existing Controller
This PCB was inside the handlebar mounted button. A 2 layer PCB (no insulation between bottom layer and anodised aluminium housing), some kind of micro with the number removed from the top (probably a PIC), 4 LEDs driven direct from the PIC pins (no current limit) for battery level indication, a transistor to buffer the on/off PWM output to the SMPS in the light head and a tantalum capacitor.
Initially I tried to add a capacitor to ground from one of the button pins to debounce the switch but in doing so I managed to break the controller. More annoying. Time to roll my own!
New Controller
Thankfully the control output from the micro to the light head is a standard 3.3V logic PWM signal so making a replacement controller involves no reverse engineering. Spec time:
The strobe-plus-steady lighting mode is very effective at catching drivers eye’s when commuting; I think Exposure lights have this lighting mode. It has the effect of providing the super birght flash to make you noticed without blinding people whilst providing a steady light so that your speed can be judged more easily.
For more detail: Bike Light Controller Re-Design