Bike Across the Country While in Your Basement

This is a very simple and easy-to-build project that provides a sensor on the pedal crank of any exercise bike and generates keyboard output triggering Google Maps Street View to advance via the up arrow key. In my design, you pedal the crank five times, and then the Street View receives an up-arrow command that advances you to the next Street View panorama. Steering is not included, but it should 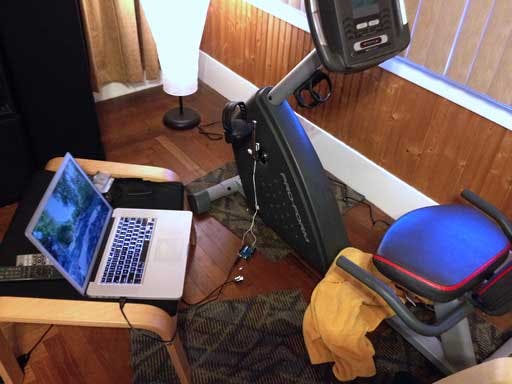 be possible to easily add it via switches attached to the hand grips on your exercise bike.

The recent release of the Arduino Leonardo allows this project to be constructed with a minimum of effort. The Arduino is a popular miniature computer capable of being programmed from your desktop or laptop, and it can run on its own after you program it and disconnect it from the PC. It has a number of input and output pins, including both digital and analog inputs. It is very popular with the DIY crowd and has been integrated into hundreds of projects. This is my first original project using the Arduino.

The Leonardo, unlike the other flavors of the Arduino (there are many variants), has a built-in keyboard and mouse emulator that allows the Arduino to mimic the behavior of a USB keyboard or mouse.

This article was first published on Low End Mac and is repeated here with the author’s permission.

This version includes headers, which are small plastic extenders from the board allowing you make connections simply by plugging wires in the holes of the header. If you intend to solder your connections get the “without headers” version, which is slightly cheaper. Please note the Arduino Uno model sold in Radio Shack stores is not the right one for this project and will not work. You have to have an Arduino Leonardo.

Read More:   Bike Across the Country While in Your Basement

With HAMMOND 1553W enclosures the rain won´t surprise you

Ergonomic enclosures of the 1553 series with a non-slipping surface found their place on a market very quickly. Precise construction...