This instructable teaches how to make our Bear With Me system, a prototype that allows two users to tangibly send and receive hugs (as well as motion) in near real-time. 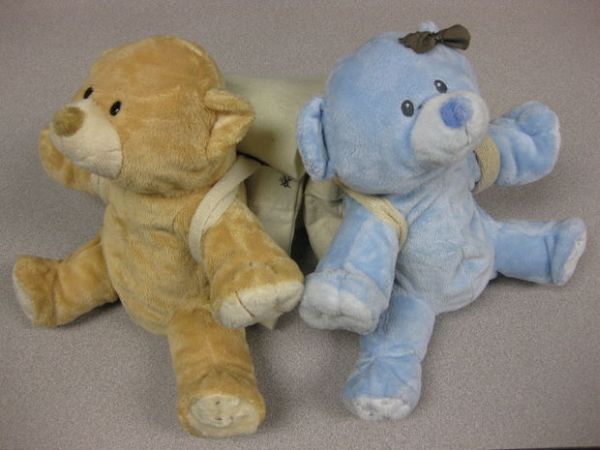 The bears will be able to send tweets when physically hugged.  Their hearts will glow when they receive the other bear’s hug.  The bears can also send and receive physical touch (pat) signals.  The bears can also send and receive tweets when they are in motion.  For a more detailed explanation of the interactions and our project, check out our presentation.
You can also contact us at ([email protected] and [email protected]) with any questions and comments.

You will need to make two bear systems, using the instructions provided, so the bears will have another bear to talk to.  Below is a list of stuff you will need to get started:
-2 stuffed animals (we chose bears but you can use the animal of your choice)
-Teddy bear stuffing (to make the bear more huggable)
-Razor blade
-Scissor
-Multimeter
–8 Lilypad LEDs
–Conductive thread
-Sewing needle
-Non-conductive thread
-Wires
-Soldering iron
-Solder
–Tri-Color LED Breakout Kit or LilyPad Tri-Color LED board
–Force Sensitive Resistor
-Fabric/Cloth (most any type will do)
–Accelerometer
–Arduino Uno
–Wifi shield for the Arduino
-Resistors
–Mini-breadboard
-LEDs
-(Optional) Additional accessories such as hat, bow, backpack, etc.
-(Optional) Conductive fabric
-(Optional) Conductive tape

Take apart the teddy bear.  Most of the time, it is easiest to take the bear apart from one of its seams.  You can use a scissor and or a blade to help.  After you cut into the bear, take out its stuffing and turn it inside out.

Step 2: Sew in lights for feet 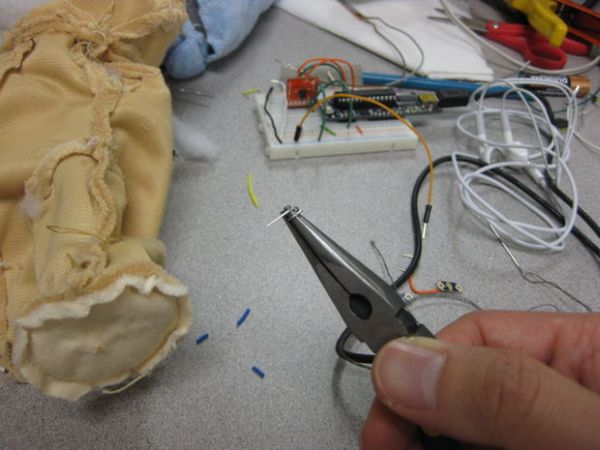 Sew in two LilyPad LED lights into each the bear’s feet.  These will glow to show motion of the other bear.  You can use any color LEDs.  For our project we used yellow lights for the gold bear and blue lights for the blue bear.
For each feet, make two small loops with conductive wires.  These will be sewn onto the positive and negative leads of the LilyPad LED lights so we can more easily attach wires onto them.  Sew the lights in parallel with conductive thread onto the bear.  Make sure you sew one small loops on the positive lead and another small loop on the negative lead.
Connect a wire to the positive lead and a wire to the negative lead by hooking it through the respective loops and solder in place.  Tape up the connections with electrical tape to prevent pieces from shifting or becoming loose.
Make sure to test the lights after you are done.

Use conductive thread and sew a 1/4 inch section on the bear’s head for capacitive sensing.  The thread will act as the capacitive sensor so you can start sewing where you see fit.  For the gold bear, we placed the stitches behind the bear’s ear.  Similar to before, connect a wire to the sensor.  Before you finish, check that the resistance of your stitches is sufficiently low (less than 2 ohms should be okay) with a multimeter.  If it is too high, it will heat up and possibly melt the fabric on the bear.  If the resistance is high, reenforce the connection with more thread and more loops.

For the gold bear’s heart, we used one of Sparkfun’s Tri color LED Breakout Kits because they were really bright and gave a nice warm glow.  The directions on how to put the Breakout Kit together can be found on this site.  You don’t have to use the Breakout kit.  Any tri color LED will work.  For example, we used the LilyPad’s Tri-color LED on our blue bear.  We sewed the light in the bear to prevent it from shifting.

We made a simple squeeze sensor with a force sensitive resistor, some fabric, and stuffing.  We first soldered the wires onto the leads of the sensors.  We wrapped the connection with electrical tape to make it more secure.  We placed the force resistance sensor inside a fabric casing and stuffed it with cotton.  Although this may seem crude, it actually worked well for our pursues.  After sewing up the fabric casing we placed the squeeze sensor inside the bear.

Step 7: Sewing up the back

For more detail: Bear With Me