A feline’s appetite is rarely sated, and cat owners around the world are routinely treated to an early morning wake up call to remind them of this fact. To solve this problem, many turn to automated feeders. However, such devices usually handle only dry foods, with a simple hopper system. [Vikram Hao] instead went above and beyond, building a fully automated wet food cat feeder. 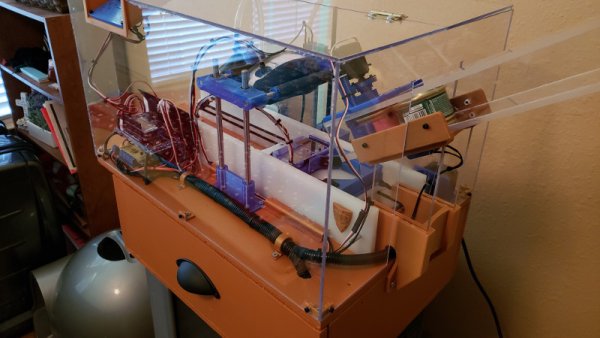 The device is a great example of effective automation. It’s fully capable of dispensing a single can of cat food, as well as opening the can, serving the food and disposing of the waste in an integrated bin. Currently, it has a maximum capacity of 9 cans, though this can be increased by simple alterations to the hopper and trash bin. Unsurprisingly, all manner of steppers, servos and brushed motors work in concert to achieve this feat. An Arduino Mega 2560 serves as the brains, providing plenty of IO to run everything as easily as possible.

[Vikram] reports that both the owner and the cat are overjoyed with the invention. We’ve seen a few builds before, with some even featuring armor plating. Video after the break.