This is my first Arduino project aimed at helping me with my other hobby which is growing oyster and shiitake mushrooms indoors.
In a nutshell, the controller takes in two temperature readings, 1 Humidity reading and 1 Co2 reading and triggers a set of four relays connected to mains power.
Intended to be connected to the mains are two heating pads, a sonic humidifier and an air pump (although the choice isn’t limited to these of course).

Here is the list of items I used for the project. 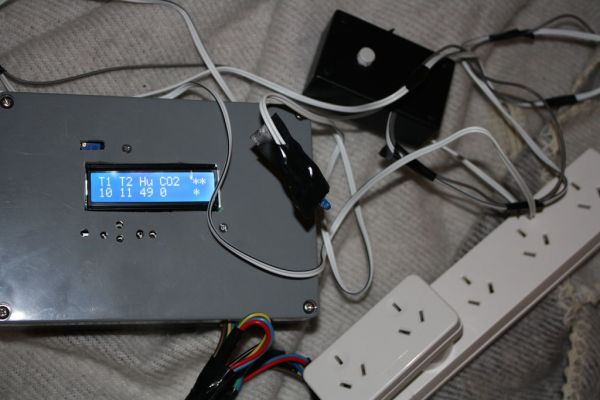 Basically it is a voltage divider with the thermistor defining the Voltage going to the Arduino analog input. One analog divider for each thermistor.

I added the circuitry in a separate jiffy box where the thermistor leads could be screwed into inline screws protruding from the box.

To test this sensor, use a multimeter to look at the voltage change as you put your finger on the Thermistor.

The humidity sensor is a variable capacitor which changes linearly with the relative humidity.
The datasheet shows how to hook up the sensor using a 555 timer (must use CMOS type).
I used this circuit to send data pulses to the Arduino. At first I found the pulses were too close together and did not give high enough discrimination, so at the output of the 555 I put a digital divide by ten chip. This made it so the pulses wavelength was in the hundreds of microseconds rather than the tens of microseconds.
Please find attached the datasheet which has the circuit diagram using the 555 timer.

I used the same style inline screws as described with the Thermistor step as a go between for this sensor and the Arduino.

To Test this, hook up the output to a speaker supply power (6volts will do) and breath on the sensor, you should hear a drop in frequency.

Initially I had ordered an MG811 Co2 sensor by itself, after setting it up I couldn’t make it work properly so I ordered one already on a board with an op amp amplifier built in.
I later found that the power supply I was running it with was faulty and the heating element in the Co2 sensor was running on overdrive.

Give it a test by placing a Multimeter on the sensor and breathing on it, it should change reading.

This instructable explains how to motorize a time lapse rail using a step motor driven by an Arduino. We will...