Last year I needed a board that I could stick my breadboards to, that would also securely hold my Arduino. I used some Plexiglas I picked up at Skycraft in Orlando and I glued everything together with Crazy Glue. This worked well, but it didn’t give me the freedom to reconfigure or put something on the back burner and start a new project. The double-stick tape that comes on the breadboards is too permanent, and the Crazy Glue was also very limiting. 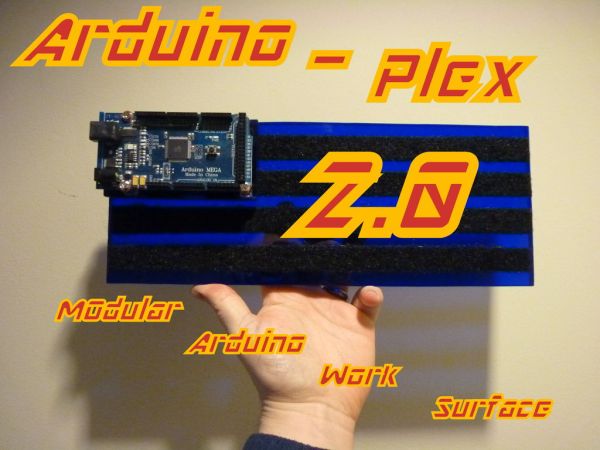 I thought about using some industrial strength Velcro to keep everything secure, without that squishy-wobbly feeling that you can get from regular Velcro. Because this Velcro is so strong, I cut it into strips and made sure that the breadboards and Arduino mounts would never have complete contact between the Velcro. This would make it so the pieces could still be moved when needed.

This is my original Arduino-Plex: Plexiglas Arduino work surface. It still works great, but now it has been completely taken over by a project that continues to grow. I realized after everything was stuck and glued in place that it would have been more helpful to be able to move things around. I would have liked to move the Arduino mounts to add more breadboard space and even remove the bus-bars between the breadboards that probably didn’t belong there in the first place.

I needed a way to shift work to something new, without completely destroying the previous project. I also built this board when I only had 2 Arduinos, and now I will be ordering a 5th board shortly. Clearly, I needed to build a new board. 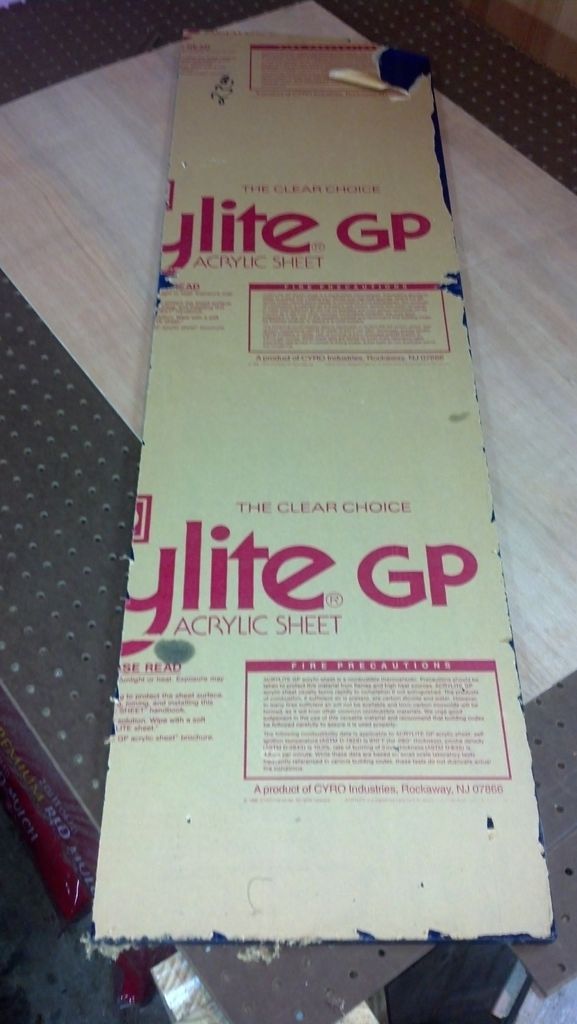 This is a sheet of transparent blue acrylic that I picked up from Skycraft last time I was in Orlando. It cost me $23 for a 1/2″ thick sheet that is roughly 1.5′ x 4′. I wanted to make this board a little smaller than the last one, and especially since the material was thicker, I didn’t want the board to be too heavy.

Some of the masking was pealed up around the corners so I repaired it with some blue painter’s tape before I started marking and cutting. This piece had a large curve to the top, so I decided to square up the end and get some of the smaller pieces I need from this piece of scrap. I took some of the breadboards and an Arduino and marked my next cut.

I had to lightly sand the cut edges and then I ran a blowtorch down each edge. Once you get the feel for it, you can get a nice, glossy surface by running the flame along the edge. However, If you keep the heat in one place too long, you will bubble the surface.

Acrylic
I cut the scrap pieces down for a few mounting bases for my new Arduino boards. I also cut some mounting pads that I could tap threads into and screw some standoffs down into them. For each base, I cut 3 equal sized pads and 1 longer block that I could use to support the USB corner because the screw hole is too close to the female headers.  Just like before I ran a blowtorch down the edges to get a nice smooth edge.

Standoffs
I tried a couple different standoffs that I found on Sparkfun and Jameco. The selection has been getting better lately, but originally Sparkfun only had a few aluminum standoffs. These will snap off in the holes you drill and will ruin the piece. Instead, I used these steel standoffs because they are much stronger. You need to make sure you drill the holes wide enough for the threads of the standoff and tap the holes with threads. If the threads are too tight, the screw will bind up in the hole and the head will snap off.

On my last project, I glued everything together with crazy glue but this time I decided to try an Acetone trick I found here. Ideally, you would use something that doesn’t dissolve in Acetone, like a glass eyedropper, but I only had a plastic, baby-medicine syringe. This worked alright, but if you let the Acetone sit in the syringe too long, it starts to dissolve the inside of the syringe and will leave a film of this other type of plastic all over the Acrylic piece.

To line everything up, I screwed the standoffs to the back of the Arduino boards and turned them until I found a nice level spot between the 3 legs. I slid the 4th, taller, unsecured support under the board and made sure there was no wobbling. Then I just squirted a little Acetone next to each leg, and the void is filled by the liquid Acetone, which dissolves the surface of the Acrylic and bonds the 2 pieces together.

Breadboards always come with this foam, double-stick tape on the back. Originally, I thought I might peal it off and just stick my Velcro to the bottom, but then all of the contacts for the short bus bars would be exposed and prone to shorting out. I could have stuck the Velcro to the double-stick tape, but it seemed like a flimsy option, so I decided to keep the double-stick tape as an insulator, and stick it to smaller, thinner pieces of Plexiglas. It’s a little overly complicated, but I couldn’t think of an easier option that would work.

To prepare the breadboards, I had to slice through the backing tape where the main bus bars connect to the project space. I wanted these to be detachable, to allow for different configurations. The little dovetailed tabs that connect them need a little clearance as well, so I cut the tape back a few more millimeters. I used a utility knife and a framing square to slice straight, even lines through the adhesive backing.

Each of the breadboard pieces now needed an intermediary mounting board. To do this I used a sheet of Plexiglas that is less than 1/8″ thick. When the plexiglass is this thin, you can score it with a Plastic cutting knife and snap it on the edge of a table. Again, I used my framing square as a straight edge and ran the plastic knife back and forth down the edge.

There is a trick to this knife and the package shows how to do it on the diagram. Most of the time, you hold a utility knife at a pretty high angle. With this knife, you want the blade to ride on the plastic like an ice skate blade. Then end of the blade will do the rest as it rides along the plastic cutting it’s groove.

I cut most of these pieces a little oversize, so that they will end up the right size after the heat shrinks the edges. The knife and the snapped edges make for a very sharp piece of plastic so I ran a blowtorch over the edges again. I had to take more care with how I held the acrylic because after it got hot it kept trying to warp. Once the edges were melted and cooled, I could see the pieces had shrunk in width just a little, but had grown in thickness just around the edge. This gives the pieces a little more rigidity.