Detecting motions or movements has always been important in most projects. With the help of the PIR Sensor it has become very easy to detect human/animal movements. In this project we will learn how we can interface a PIR Sensor with a microcontroller like Arduino. We will interface an Arduino with PIR module and blink a LED and beep a Buzzer whenever a movement is detected. The following components will be needed to build this project. 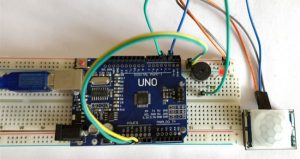 The PIR sensor stands for Passive Infrared sensor. It is a low cost sensor which can detect the presence of Human beings or animals. There are two important materials present in the sensor one is the pyroelectric crystal which can detect the heat signatures from a living organism (humans/animals)   and the other is a Fresnel lenses which can widen the range of the sensor. Also the PIR sensor modules provide us some options to adjust the working of the sensor as shown in below image.

The two potentiometers (orange color) are used to control the sensitivity and trigger on time of the sensor. Basically the Dout pin of the sensor is present in between the Vcc and Gnd pins. The module works on 3.3V but can be powered with 5V as well. On the top left corner it also has a trigger pin setup which can be used to make the module work in two different modes. One is the “H” mode and the other is the “I” mode.

In “I” mode the output pin Dout will go high (3.3V) when  a person is detected within range and will stay high as long as he/she stays within the limit of the Sensors range. Once the person has left the area the pin will go low after the particular time which can be set using the potentiometer.

Note: The position of potentiometers or pins may vary based on your PIR sensor vendor. Follow the Silk screen to determine you pinouts

The circuit Diagram for arduino motion detector project by interfacing Arduino with PIR module and blinking an LED/Buzzer is shown in the below image.

The program for Arduino is pretty simple and straight forward. To connect Arduino PIR Sensor, we have to assign the pin number 2 as input and pin number 3 as output. Then we have to produce a discontinuous trigger whenever the pin 2 goes high. Each line is explained below.

If we find that the particular pin has gone high, it means that the PIR module has be triggered. So, now we has make our output pin (pin 3) to go high. We turn this pin on and off with a delay of 100 milli second so that we can attain the flashing or buzzing output. The code to do the same is shown below.

During the last months, a new WS2812 alternative appeared on the market: The SK6812. I finally managed to get my...