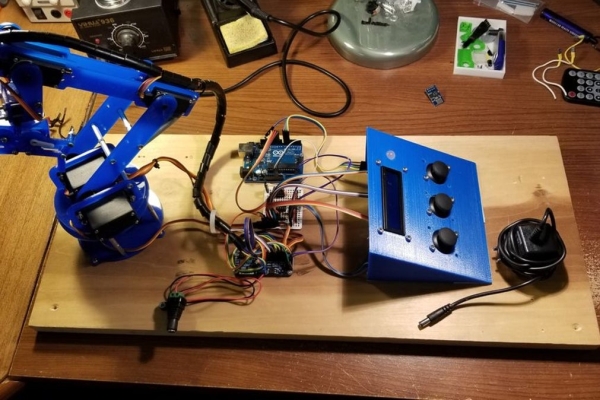 I am a member of a robotics group and each year our group participates in an annual Mini-Maker Faire. Beginning in 2014, I decided to build a new project for each year’s event. At the time, I had about a month before the event to put something together and had no idea what I wanted to do.

A fellow member posted a link to “an interesting open source robotic arm build” that peaked my interest. The plans were just an arm with no controls or a controller. Considering my time constraints, it seemed like a really good starting point. The only problem was that I had really no tools to get started.

With the help of some of the group members, I was able to get the acrylic parts cut and sent to me as well as the two 3D printed parts shown below. Combined with some overnight hardware orders and several trips to the local hardware store, I completed a working project the night before the event!

As is usually the case, there is more to the story and several incarnations to the build that has been condensed to what you see below. If you have an interest in the back story, more can be found here: https://andrewhoover.info/blog/robotic-arm-project.html

Step 1: What You Need – Hardware & Electronics

The original project designer lived in Europe and subsequently used metric measurements and materials common there. For example the press-board he used for the body was a standard of 5mm thick. Similar material here in the US is 1/8″ which is about 3.7mm thick. This left a gap in the openings that were originally designed to be press fitted. Rather than correct the drawings I simply used Gorilla Glue to secure these joints.

He also used M3 threaded nuts and bolts which are not standard at your local hardware store in the US. Rather than convert these to locally available options, I simply ordered the hardware online as shown in my parts listing below.

Almost all of the parts for this arm were cut from 1/8th inch acrylic The two joint bearing spacers do need to be printed, however. Also, the original designed called for the two joint spacer bases to be 7mm tall to the bearing shaft. When I began assembly of the upper arm it became quickly clear that these were too tall due to the height of the TowerPro servos. I had to have new joint bearings made with a base of only 3mm tall, which, by the way, was still a bit too tall but manageable. You will want to take note of the relative height of your servos and account for the distance between the two lower arms:

Before you begin, make sure to center all of your servos! If at any time during construction, if you manually move the position of the servo, you will need to recenter it before securing it to the frame. This is especially important with the shoulder servos which always need to move in unison.

I built this project as a development platform for some ideas I have for a later educational project. So, most of my connections are simple dupont connectors. The only soldering I did was for the MCP3008. If you can find a breakout board for thiscomponent, then you should be able to construct this arm solder free.

There are 3 groups of components:

The Fritzing schematic above details the pin connections for all of the components.

We’ll start with the inputs. The joysticks are analog devices – meaning that they present a variable voltage as an input to the Arduino. Each of the three joysticks have two analog outputs for X and Y (up, down, left right) making a total of 6 inputs to the Arduino. While the Arduino Uno has 6 analog inputs available, we need to use two of these pins for I2C communication to the screen and servo controller.

Because of this, I incorporated the MCP3008 analog to digital converter (ADC). This chip takes in up to 8 analog inputs and converts them to a digital signal over the Arduino’s SPI communication pins as follows:

The joystick connections in the schematic are just shown for an example. Depending on which joysticks buy and how they are mounted, your connections may differ from mine. Different brands of the joystick may have a different pinout and also may orient X and Y differently. What is important is understanding what each input on the ADC represent. Each pin represents the following relationships in my code:

NOTE: When purchasing and mounting the thumb joysticks referenced in the parts list, keep in mind that the orientation of the modules may differ from mine so, test x and y outputs for proper connection to the ADC. Also, if you are using my 3D printed control panel, the mounting holes may be offset from mine.

The Adafruit PWM/Servo Controller makes this project super simple. Just connect the Servos to the servo headers and all of the power and signal connections are handled. Unless you find servos with extra long leads, you will want to get a set of servo cable extensions in varying lengths so that all of your servo cables reach your controller board.

Servos are connected as follows:

NOTE 1: One BIG note here: The supply voltage for the whole project is coming in through the power terminal block on the Servo Control Board. The V+ pin on the Servo Controller is actually supplying power from the terminal block to the rest of the circuit. If you need to program your Uno, I highly recommend disconnecting the V+ pin before connecting the Uno to your PC as the current draw from the servos could damage your USB port.

NOTE 2: I am using a 6V AC to DC wall adapter to power the project. I recommend an adapter that can supply at least 4A of current so that when one or more of the servos get bound up, the sudden spike in current doesn’t brown-out your system and reset your Arduino.

In my setup, I used the side rails of the breadboard to tie all of the power and ground lines together as well as the I2C pins for all of the devices.