One of the major problems encountered when using push buttons and switches in digital electronics project is the problem of bouncing. When we press a button once it may register twice and when we press it four times, in a row, for instance, it may register just twice. This occurrence is due to a property of switches known as bounciness which is as a result of the physical property of the switches. 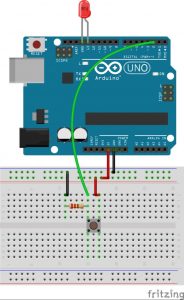 Contact bounce (also called chatter) is a common problem with mechanical switches and relays. Switch and relay contacts are usually made of springy metals so when a switch is pressed, its essentially two metal parts coming together and even though the connection may seem already made to the user, it may not happen immediately, as a matter of fact, it may make contact on one side – then both – and then the other side –, technically bouncing between in-contact and not-in-contact until it finally settles down. This result in a rapidly pulsed electric current instead of a clean transition from zero to full current as shown in the graph below.

The effect of bouncing is usually unimportant in power circuits but causes problems in some analog and digital circuits that respond fast enough to misinterpret the on‑off pulses as a data stream and as such even though bouncing occurs within a millisecond time frame, the microcontroller often works at a faster speed and may fail or succeed to register the press of the switch due to the state of the bounce.

The effects of contact bounce can be eliminated (debounced) by use of mercury-wetted contacts, but these are now infrequently used because of the hazard of mercury release. Alternatively, contact circuits can be low-pass filtered to reduce or eliminate multiple pulses. In digital systems, multiple samples of the contact state can be taken or a time delay can be implemented in order for the contact bounce to settle before the contact input is used to control anything.

For today’s tutorial, we will be looking at how to remove the bounce effect in switches used for an Arduino project using software debounce method.

A Beginner’s Guide to Arduino

After some years of experimenting with Arduino, I decided that the time has come to share the knowledge I've acquired....