My first attempt at an LED Aquarium light started as an excuse to buy some of those LED light strips off of eBay.  I gutted the old 18″ fluorescent fixtures and soldered together row after row of 18″ RGB LED strips.  They mounted to a thin aluminum plate I screwed into the old light housings.  I mounted one of those remote-controlled RGB LED controllers in there with a 12V 5A power brick.  The remote control let us change the colors, and had a few blinky light modes that I’m sure the fish didn’t appreciate too much.  My wife loved it, which is all that really matters. 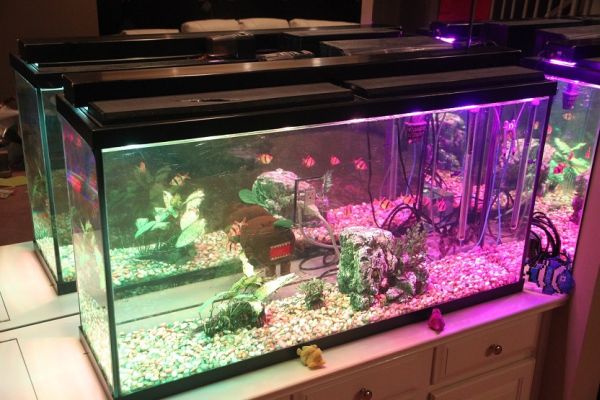 I wasn’t happy with the overall build – the fixture was fairly hot and the adhesive backing on the LED strips was worthless.  I eventually had to encapsulate the LED strips with a sheet of polycarbonate on the front to keep them from falling off, which made everything even hotter.  The project died one day when the combined heat of the LEDs and the power brick melted a big smelly hole right through the brick’s black plastic housing.  I wasn’t home so I can’t say whether any flames were involved, but the polyurethane coating encapsulating the LEDs was browned in several places.  We were pretty lucky nothing fell into the water and poisoned the fish.
At this point I was ready to drop $150 on some aquarium light from Amazon, but my wife loved the ambiance of the RGB LEDs so much she convinced me to make a better one.  I coiled a white LED strip on top of the aquarium without a housing.  It looked pretty bad but that way it wouldn’t get so hot and the fish wouldn’t be left in the dark while I figured things out. 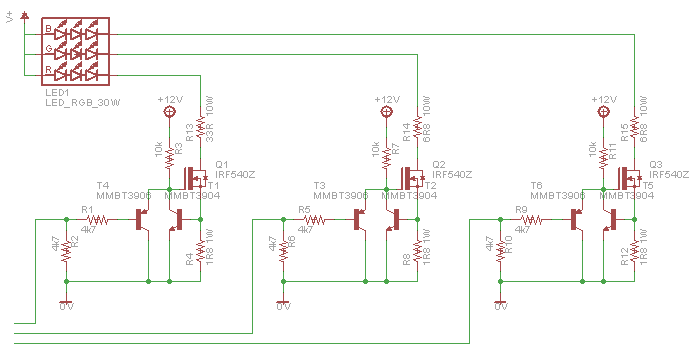 Version 1
I knew heat was my biggest enemy, yet I wanted to make something significantly brighter than the old LED strips could achieve.  I read all about the intensity of light at sea level and what kind of lighting a planted aquarium might require.  Eventually I decided to go with six 30W RGB LEDs, which I could find on eBay for about 12 dollars each.  That’s a total of 180W of heat that the fixture would need to dissipate.
I spent a few weeks searching the internet for an appropriate housing.  Eventually I found a website called gkphotonics.com which sells extruded aluminum project boxes of various shapes and lengths.  The 4″ wide profile looked great and was the perfect size for my aquarium.  It also had grooves on the inside which could hold a circuit board.  I contacted the owner and he was able to make me a 48″ long piece anodized black.  It took a few weeks, but it eventually arrived in good condition and for less than $100 including shipping.
To help dissipate the heat, I added a fan to one end of the extrusion.  It pulls air in from the area where the LEDs are mounted and pushes the air through the extrusion and out of the other end.  The opposite end cap was raised off the extrusion by a few millimeters to allow the air to escape.  Small aluminum U-channels were screwed into the bottom edges to make space for the LEDs to mount underneath.  I had to cut a few slots in them to avoid interference with the Aquarium’s hood pieces.
For more detail: Aquarium Light V1