Analog sensors produce an analog (continuous) voltage that typically varies from 0 to 5 volts. They have three wires – ground, power, and signal (typically red, black, and white, respectively). Examples shown below include: 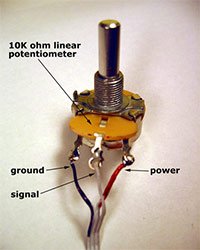 Potentiometers typically measure rotation or linear travel, and are used in car stereos, dimmers, equalizers, etc. to input a continuous range of values.

Proximity sensors measure the distance from the sensor to an obstructing object in front of the sensor. There are two types, Infrared and Sonar. The infrared sensors are cheaper, but the sonar sensors are typically more accurate.

Accelerometers sense motion and are used to detect changes in position, tilt, and orientation. They come in a variety of configurations (number of axes, e.g.) and sensitivities. 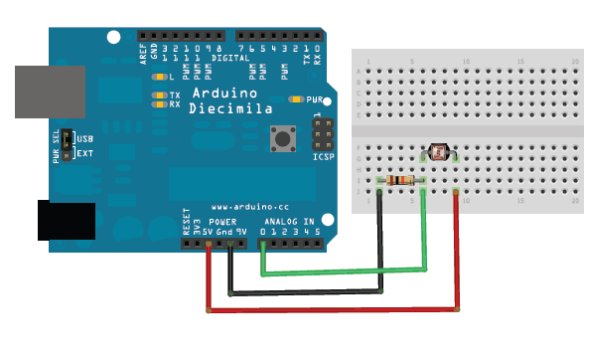 Bend sensors measure the bend or flex of what they are attached to.

Pressure sensors measure the amount of pressure, for example of a finger press, or the weight of someone standing on a surface. For wiring these sensors (other than the Infusion Systems version, which comes ready to go), you’ll need to add a resistor in a voltage divider configuration – see the information on the light sensor below, which work the same.