The DeepCover Security Manager (DS3660) is a security manager with 1024 bytes of SRAM for the secure storage of sensitive data and the physical tamper-sensing response functions required in cryptographic processors and data security equipment. The low-voltage operation allows the host microprocessor interface and optional external memory to run at a low voltage (1.8V typical).

One of the DS3660’s primary features is the on-chip nonimprinting memory, consisting of eight 128-byte banks incorporating a high-speed, direct-wired clearing function. The 1KB memory is constantly complemented in the background to prevent memory imprinting of data. The DS3660 architecture allows the user to clear selective banks of the memory based upon specified tamper events. In the event of a qualified tamper event, the desired bank(s) of memory are rapidly cleared and a negative bias can be applied to erase external memory.

The DS3660 includes a seconds counter, watchdog timer, CPU supervisor, nonvolatile (NV) SRAM controller, and on-chip temperature sensor. In the event of a primary power failure, an external battery source is automatically switched in to keep the memory, time, and tamper-detection circuitry active. Optionally, an internal 1.8V bias source can be selected to keep a low-voltage SRAM alive. 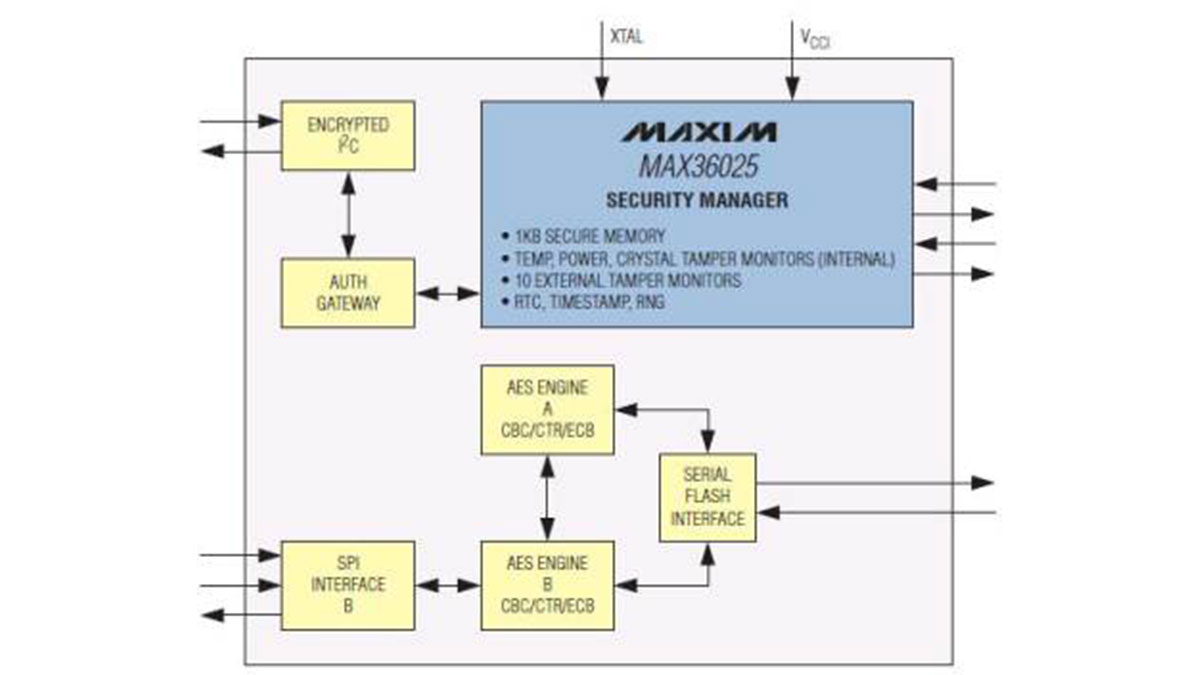 The 1024 byte of on-chip nonimprinting memory consists of eight 128-byte banks, can be selectively cleared by end users based on user-specified tamper events.

The chip, the DS3660, has an internal 1.8V bias source to power low-voltage external SRAM that can be used to store less critical data, and it is configurable to operate with a low-voltage microprocessor for battery-operated devices.

It is designed to provide tamper detection regardless of the power source. The on-chip battery-backup controller constantly monitors the main power (VCC) and automatically switches to the battery (VBAT) when the main power is too low or not present at all.

Drawing only 4µA (typ) of battery current, the chip is designed to retain critical information and monitor tampers while on battery power.