The TiltKey is a keyboard input device based on tilting. Based on the angle that it is tilted at, and the direction it is tilted in, you can write every letter of the alphabet, every number, and every symbol found on a standard US keyboard. Operation is very simple; the LCD display shows the letter your going to write, and pressing the “press” button will write it to your computer. Holding the “shift” button will write the upper-case version of the letter you’re intending to write. Want to write some numbers and symbols? Just press the “change character set” button to go from letters to number and symbols or vice versa. 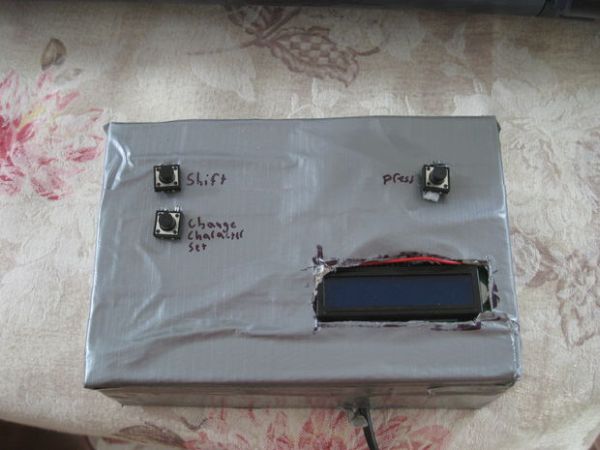 In number and symbols:

Inside it has an Arduino Leonardo and an accelerometer. The Arduino is constantly reading the x, y, and z reading of the accelerometer, and is always comparing them to the x, y, and z of each position. If it’s a match, it’ll print it to the screen. If it’s a match and the “press” button is pressed, it’ll write to the computer it’s plugged into, using the keyboard library, which is automatically included with Arduino 1.0.1.

READ  Basic Experimenter Board for easy prototyping of electronic circuits

When I first started working on this project, I had faith in it being more efficient than a regular keyboard. People tried to bring me down, saying that it would never be useful. They were 100% correct. The TiltKey may sound like a revolutionary new invention, but it is incredibly inefficient and useless. It often takes longer than 45 seconds to find the letter you want to write. That does not mean that all my hard work went to waste, or that you should not try this project. It was incredibly fun to make, it’s sort of fun to use, and is just a very cool thing to have, even though it may not be practical.

I tried to make a video of it, but it did not come out very good. This video is evidence that you need two hands to operate a TiltKey:

Once you obtain these supplies you can begin. 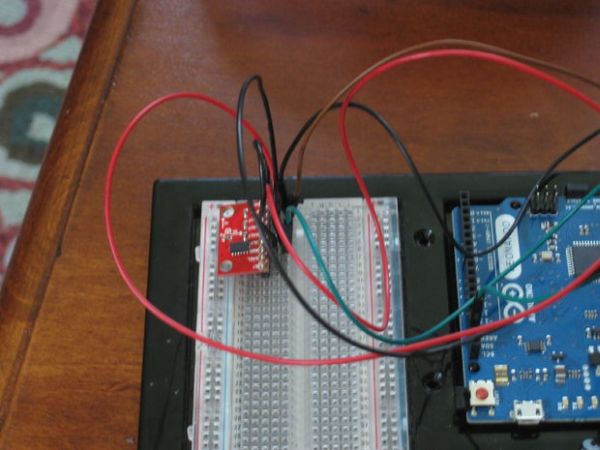 Now it’s time to wire up your LCD. The diagram should be able to show how to wire it up, or you could read this tutorial from adafruit. Remember to wire the LCD on a separate breadboard.

You are now ready to wire the first button. You must first solder two wires to two of the contacts on your button. Then, follow the diagram to wire it up. This button is the press button. If you want to wire it without the diagram, keep in mind that you are pulling pin 2 low.

You have now gotten far enough to transfer your work into a box. Simply open it up and put all your electronics in it. Cut a 3x8cm rectangular hole for the LCD and 1×0.3cm hole for the button. Push the button through the hole you made to have it on top of your box, and secure the LCD the the “ceiling” of your box, so it can be seen through the window you cut. Make sure to also cut a hole in the side for the USB cable to fit through.

This gesture controlled robot uses Arduino,ADXL335 accelerometer and RF transmitter-receiver pair. We will divide the entire robot into 3 parts...