My son and myself made a little arduino robot that records temperature. He wanted me to draw a robot, I wanted to experiment with blinking LEDs relaying data so a plan was hatched. The way the LEDs work is as follows: Green = lowest temperature recorded, Yellow = highest and Red = current temperature with all readings being in °C. 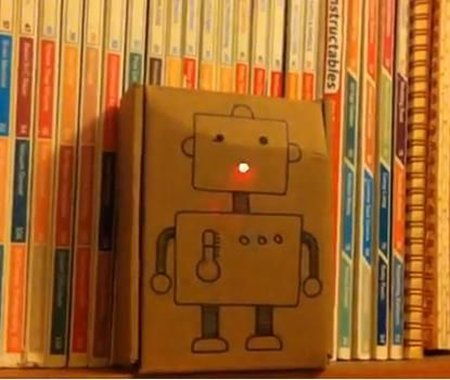 I realise now how bad the photograph is but as everything is nice and secure in the robot now, it would be difficult to take it out and photograph again – sorry.

The LEDs come off the following pins: Red (for current temperature) D13, Yellow (highest) D12 and Green (lowest) D11.
The thermometer conects to the 5v and Ground and feeds into pin A0.

The code is made up from tutorials etc from the forums. It’s a little messy I think but would love it if you pulled it apart and added your own take on the idea. Anyway download from here and upload. Meanwhile get your little monkey to draw or colour in the robot on the face of the small cardboard box. Once completed, make three holes for the LEDs to pop through in the face and a hole on the side for the temperature sensor to look through.

The ingredients are rather simple and comprise of the following:

Some months ago I wrote about getting a 7″ capacitive touch LCD up’n running with Arduino. Since that time I’ve...