Garlow is a mini GPS Watch that is based on the Arduino Nano board. It’s not really that “mini” compared to other commercial GPS watch like the Garmin, but I really made a great effort to bring the size down. In fact it looks more like a GPS clock. The first version Arduino GPS logger I built was based on the Arduino UNO, and it was larger than 2 packs of poker cards stacked together. It works just as well as a Garmin GPS watch.

Garlow stands for GPS Arduino Rechargeable Logger OLED Watch. It does what the name suggests: Accurate time, positioning related information are received from GPS satellites, and they can be logged on SD card and shown on a OLED display. It can be carried as a watch or simply left at the back seat of your car as a GPS data logger. The whole system is built on the backbone of an Arduino Nano board, with a Lipo power module which enables USB battery recharge.

During the development of this Arduino GPS watch, I discovered so many things and techniques that I didn’t know about the Arduino, for example I didn’t know you could save data on EEPROM, which is unaffected by power down. 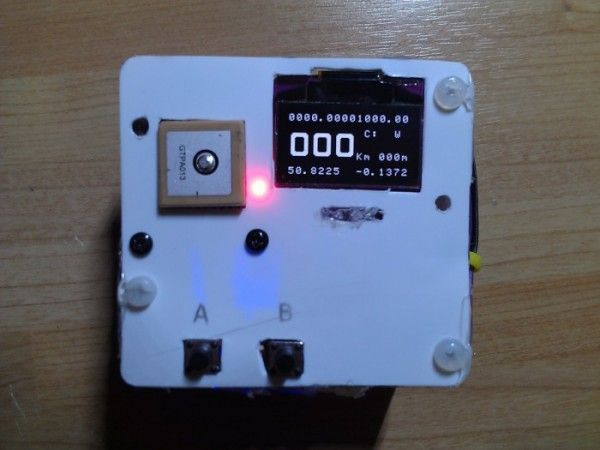 So here are all the parts I used in this project.

Wiring is easy, and soldering is minimum.  I used jumper wires so each component can be disconnected for future projects.

I built the case using Plastic Styrene sheet (my favorite DIY material). Everything is then glued together using hot glue, and some nylon screws and nuts.