In this instructable you will learn how to make a Q&D-Poor man’s-Skinner-Sadist-Jeopardy game .

First off, the disclaimer: I’m not responsible of whatever you do. You have to know that with a great power comes…bla-bla-bla. Just be careful and remember that electricity reserves respect. While the energy involved in this project is generally safe, it can be fatal (or at least very harmful) given certain special conditions, so just to play on the safe side:

– Never mess with little children or pets, even with their consent, just say no.
– Avoid old or sick people (mainly with a heart condition or with a pacemaker (or a peacemaker gun).
– Remember that using the device on body parts other than the extremities can be dangerous (you never know what nerve are you killing).**

Ethical disclaimer:
In connection with the Milgram experiment and to avoid any ethical dilemma for the Arduino, I used the LED library; doing this way I fool the Arduino into thinking he is only deploying innocent LED blinks to the players. Arduino is only obeying the evil orders of the authority figure and is not aware of the pain of the players, please don’t judge him.

By now, maybe you are wondering: “What’s a Q&D-Poor man’s-Skinner-Sadist-Jeopardy game?, do I need one?, is it for me?” well, if you are ready to start an epic journey to the world of power, irresponsibility and electronics to create a device capable of make the players learn something by the always effective power of pain and shame… you might be ready to receive the knowledge. 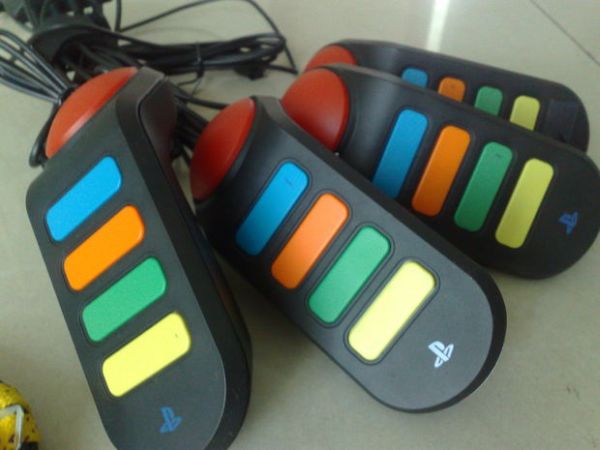 For those faint of heart or just coward (like me after too many accidental shocks while working on this) I designed an alternate feedback system . Instead of shocks it just shares vibrations with a vibromotor, it is still fun if you place it in body places where the vibration results very uncomfortable, like over the inferior part of the eye, behind an ear or whatever weird place you can imagine.

Q&D:
Quick and dirty, the fact is that I didn’t have much time to get a working prototype for this evil device, so as soon as it could work and have a minimum of robustness (just enough to endure the mistreat of shocked (and thus disabled) humans) it was considered finished. You will note it is really dirty (I didn’t even bother to trim the resistors).

Poor man’s:
While some of the main parts are easily obtained for free, it’s “Poor man’s” not because it’s cheap (unless you stole the needed parts, which I don’t recommend), it’s “Poor man’s” because the final result and overall look will make you think:
“Man, this thing looks like sh*t”
but believe me: It works like a charm and will give you tons of joy and happiness while infusing the players with pain and sorrow (in the form of high voltage sparks). Besides it will help to avoid it being stolen if you happen to forgot it somewhere.

Skinner:
Read about our dear friend B.F. Skinner , then this and finally this , while there is no direct connection (and seems like he doesn’t believed strongly in the universal force of punishment) the premises are enough to justify the name (or I just want the fame of the name, that could be true).

Sadist (and masoquist if you want):
Eventually, you (and your players) will discover why… muajajajajaja.

Jeopardy game:
OK, I’m just using that name to describe a Quiz game for three players and a host, the players win the right to answer by means of a button… aside from that there is nothing else in common with the TV show… I hope the lawyers don’t get mad.

Objective:
A game to test the knowledge of the players and help them learn faster by means of reinforcement and punishment. You can use it on parties or to challenge other alpha males in your surroundings

Well, enough garbage (this time for real). Go to the next step to see the bill of materials, the approximated cost of this hell bound project, you will also see a video of the device working).

Don´t forget to look at the pictures and say “Man, this thing really…”

Hardware
– A microcontroller (an Arduino board is used in this project).
– One set of Buzzers controllers.
– 2 or 3 Disposable cameras (with flash) (or add a vibromotor for the weak with $4 to $14 to squander).
– Some optocouplers (see datasheet for the mines) or logic MOSFETS (or simple MOSFETS).
– Some old t-shirt or garment.
– Velcro or a mean to make a good and tight strap.
– Cable.
– Hot glue or a flexible but strong adhesive (even needle and thread will do).

Software
– A custom made Flash quiz game.
– An small program to put inside the microcontroller and control the hardware.
– A serial connection to communicate Flash with the micro.
– An small app to interpret the Buzzers and send the input to Flash.

I got the optocouplers for free with the supplier. Just follow this instructable to know how (don’t overuse it, please).

The good news is that the base software is free and I will provide it… In this point a have to confess: this project is nothing more than a monster (like that of Dr. Frankenstein) it’s just a mash-up between lots of bits floating on the internet. At the end I shall give credit to those who deserve it.

Look into the eyes of the monster:

The core concept is simple: A flash game that presents the questions and receives the input of the the players (using the buzzers), the flash game process the info and sends the signal to the arduino to punish the bad players (more of this soon). The arduino controls the shock components (salvaged from the disposable cameras) and the unfortunate player receives what deserves.

See the Diagram No.1 to get a visual cue about the project.

The plan then, is to build and set-up the hardware, after that we will occupy ourselves with the software. Let’s begin with the core of the hardware control:

The Arduino and his companion circuit.

I’m using the breadboard because I didn’t want to waste time soldering (and desoldering when I wanted my optocouplers back). You will note I’m not a professional on this so, please excuse my drawings. See Diagram No. 2 to see the connections, and the pictures to see it on the real life.

As you can see, there are three outputs, one for each player; each output controls the feedback device of the players. Each output just closes the high voltage circuit of the disposable cameras capacitor. The resistor is useful if you have different levels of cowards (just decrease the resistance if you feel your subjects are getting insensible to the spark and increase the resistor if your players start crying for their dignity and mommy).

Given that we are using optocouplers there is no need to add too much security to the circuit, but if you happen to use MOSFETs or Logic MOSFETs don’t forget to add the proper diodes as needed, we don’t want HV on the microcontroller. Using normal MOSFETS may still close the circuit but not completely so the punch will be less intense. Note that on my third player I’m using a vibromotor, so no optocoupler needed (I had just two anyways). The vibromotor board included every needed component to secure my output.

OK, just set-up on your breadboard a circuit like the one you see on the pictures and you are ready to go to the next step. Don’t let yourself impress by my disorder, it is very simple and repetitive, stick to the diagrams and everything should be clear.

Go to the next step to see the building of the feedback devices (that other shocking evil core of the project).

For the code on the Arduino board wait for the step 9.

Let’s start by salvaging the shock central component. Go and read this instructables to get the knowledge, (I found this one particularly good and inspiring (you will note I just take the camera circuit and did nothing more but following their instructions should add for a neater and less menacing look)).

As you should remember this is Q&D (being this project one which needed to be completed in one or two nights for display on a company event). So I didn’t have the time (neither the ability) to follow the good tutorial of the taser… I just disassembled the camera, hooked my cables on the capacitor and wrapped it with a little of electrical tape.

Look at the diagram No. 2 to see my cabling nightmare, and for the sake of any childish delusion that you may hold as sacred (god?) don’t touch the transformer while you are working on it… by personal experience I can say you that if the capacitor’s spark hurts like hell… the transformer punch feels like a thousand volts across your brain (or at least I fell it like two hells). It’s more uncomforting (at least).

See the pictures to help you in this hard step. Remember to cut a portion of the cable to get a good contact and maybe applying hot glue would help to secure the connection and avoid disgusting shortcuts.

Go to the next step to see the building of the shocking straps or feedback devices.