In this project, we are going to show you how to control home appliances using a TV Remote. This same principle can be applicable in offices and industries as well. 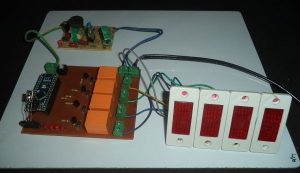 The project deals with the automation of four home appliances, like Tube lights, fan, bulbs, and of course TV. To automate them, four relays must be used. The circuit provided below is designed to switch the relays. But to automate and control home appliances, you must have a basic idea of connecting them to switchboards, and must learn on what to do if the remote malfunctions. Our article on Switchboard for Home Automation will give you a clear idea on the subject.

Other articles on Home Automation have also been published. You may also refer them and try it out.

An Arduino Nano is used in the project, because its size is small and does not require any external programmer. If you are a pro in Arduino, you can use any other Arduino according to your choice. Arduino control the relays according to the button pressed on the remote. A 3-pin sensor TSOP 1838T is connected to the Arduino, which reads the signal and sends to the Arduino. Arduino decodes the signal and turn ON and OFF the appliances accordingly.

The project is not very easy but you can make easily, because PCB designed on EAGLE, so you just need to print the PCB.

In the project, an Arduino is using as controlling unit. A TSOP 1838T sensor is using for receiving signal from the remote. Output pin of sensor is connected to the Arduino, when any button of the remote is pressed, IR LED of remote sends a unique encoded signal, this signal is received by sensor and sent to the Arduino, The Arduino decode the signal and turn on and off the lights according to the signal. 12-volt relays are used for switching the appliances.

This is an IR sensor, which receives the signal of IR Remote. This sensor have three pins 1st is Vcc 2nd is GND and third is OUT; the operating voltage of the sensor is 3.7 to 5 volt. 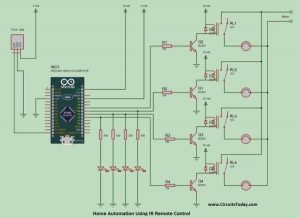