This project is a HVPSU (High-Voltage Power Supply) that generates up to 220V from a 12V input. In addition to that, it also provides 2*Vout (so, up to 440V, for dekatrons), and two outputs for powering digital logic: 5V and 3.3V. The primary HV boost circuit reaches 88% efficiency when going from 12V to 185V at 55mA, with a 3% output ripple.

I designed it because I couldn’t find anything that would make sense for my Nixie projects. There are plenty of tiny power supply modules available on eBay, but most of them end up being impractical: no 3.3V (for my microcontroller) and 5V (for my 74141 nixie drivers), no mounting holes, no >400V output for powering dekatrons. Some supplies make a token gesture towards practicality by sticking a 7805 on the same board, but you quickly find out that the current draw of 6×74141 is enough to require a large heat sink on a 12V-powered 7805 (one 74141 consumes 12.5mA!). This means that instead of a single-board power supply you end up routing your input power all over the place, implementing your power supply in several places.

I wanted to have something versatile enough so that I could use it in a number of projects: with nixies, dekatrons, other tubes, VFDs, phone ringers, etc. I also wanted it to fit on a 5x5cm PCB, so that I can order 10 PCBs for $10 at iteadstudio.

The version I’m posting online is not perfect, but works quite well in a number of my projects. I decided I’d rather publish it as it is now rather than keep it locked forever. 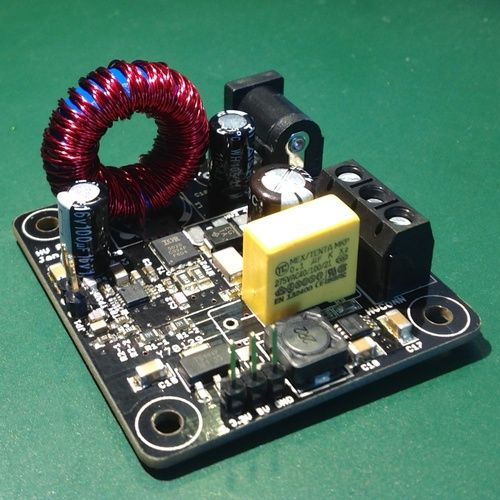 The circuit and PCB you see are the result of multiple iterations. I started out with a design based on MAX1771, which turned out to have stability problems, mostly due to EMI on the feedback pin. I then went through seven board designs, trying to make it work. I ended up with a design that mostly worked, but exhibited uncontrolled behavior in some conditions (load transients, overcurrent, EMI). I finally got tired of the MAX1771 chip and decided to look for another solution.

I chose the TPS40210 from Texas Instruments, which seemed to be a solid performer in high-voltage boost applications, was easily available, not too expensive. The existence of an automotive-grade version also means that the chip won’t disappear anytime soon. I went through three board revisions with the TPS40210, which were mostly about shrinking the design and adding the TPS62160 buck converter instead of a 7805 to produce 5V.

n the process I learned a lot and discovered that there is a lot of stuff about boost converters that I didn’t even know I didn’t know. Here are a few examples:

I now know slightly more, but the circuit certainly isn’t perfect. I don’t even have the equipment to measure some of its properties, so I have to leave it as it is.

There are two principal reasons for making this available as an open-hardware project:

Version 2.2 is what I use in all my projects. Version 2.3 has several tiny fixes: adjusted position of mounting holes, added comments in the schematic, but is otherwise identical to 2.2.

EnOcean has introduced its first energy harvesting wireless switch module for consumer applications such as the control of LED lighting...