Normally the Joule thief produces output voltage, which value is difficult to predict. Without load (the LED) I have measured voltages over 30 V. I wanted to create a Joule thief, which can be used to supply some small electronic devices, but having well defined and stable output voltage. There are known some solutions in which instead the LED load, a one-diode rectifier is used, and the output voltage is stabilized by the use of Zenner diode. I did not like this solution, because through the Zenner diode flows always a constant DC current, what  reduces drastically the efficiency of the device and empties fast the supply battery. I was looking for other, better solution of the output voltage stabilization (limitation).
To try my solution, at first, I needed to build the standard working Joule thief. How to do this – there are a lot of articles and internet sites (for example this). How to find the needed parts? – I knew that inside the high efficiency lighting bulbs are some parts, which could be re-used. I had a defect bulb and I carefully cut the plastic box. From there I extracted the voltage converting board. On these PCB’s can be found some very useful stuff : HV diodes, chokes, HV capacitors, HV transistors..etc (HV means high voltage ~ 400V). I took the ferrite toroidal transformer, cut and removed all its wires. 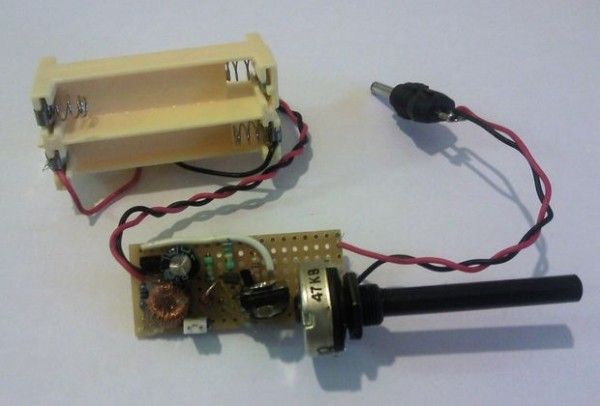 After that I disassembled the choke. I took around one meter enamelled wire from it, and winded it around the ferrite bead. Because the wire was fold, I winded simultaneously two coils having ~ 50 turns. Having the main part of the Joule thief (the transformer) ready, the remaining work is not much.. The only tricky in the design is to connect both coils in the correct way. (see the mentioned link for additional information). So designed the Joule thief was able to produce 34 V voltage measured on the collector node of the NPN transistor (2N2222) without any load, when supplied by 1.2V AAA battery (filterd with 2.2uF capacitor).

After finishing the original Joule thief, I have created the additional circuit, which controls the output voltage. It is based on the use of bipolar transistor Schmitt trigger. Its input is connected to the middle point of variable resistive voltage divider placed between the regulated supply voltage and the common ground node.The output of the Schmitt trigger connects to the gate of NMOS switch transistor. The drain terminal of this switch connects to the base of the Joule thief oscillator transistor.