In this article, we will go over how to connect a force sensing resistor, or force sensitive resistor, (FSR) to a circuit to build many different types of useful circuits with them.

So with no pressure or weight applied, the FSR circuit will be essentially open because its resistance is so high.

With a good amount of pressure applied, about 20lbs needed, the resistance drops dramatically and can go as low as 200Ω.

We will use the basic functioning principles that FSRs have to create a meaningful circuit.

We will wire an FSR to an arduino board. We wire a 10KΩ resistor in series with the force sensing resistor in order to create a voltage divider. One terminal of the FSR will connect to the 5-volt voltage supply of the arduino board and the other terminal will connect to ground. The 5 volts of voltage will be divided based on the resistance of the fixed resistor and the FSR. The fixed resistor will always stay 10KΩ. However, the FSR serves as the variable resistor. It will change resistance based on the pressure applied to its surface. When there is no pressure applied, its resistance is very high, so most of the voltage falls across it rather than the 10KΩ resistor. When it is pressed against with maximum pressure, its resistance falls to near 200Ω, so most of the voltage falls across the 10KΩ resistor and not the FSR.

We could apply this circuit that we’re going to build for a situation such as the car seatbelt lights. If our FSR has a very low voltage, this indicates that a lot of pressure is being applied to it. This would indicate that a passenger is present in the seat. If this is the case and the seatbelt is not on, this would trigger the passenger seatlight light to turn on in the dashboard.

Parts Needed for the FSR Circuit

We will use 5 volts of power from the 5V terminal of the arduino.

The circuit we will build is shown below: 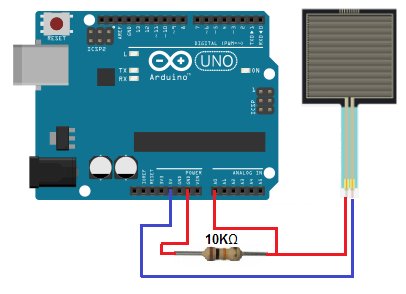 Again, the 10KΩ resistor is in series with the FSR. This forms a voltage divider circuit with the 5 volts powering it. This 5 volts will be divided between the 2 components, based on the resistance of each of the components. Based on the voltage across the components, the arduino board can read how much pressure is being applied to the FSR.

For more detail: How to Build a Simple Force Sensing Resistor (FSR) Circuit

Categories: How To – DIY – Projects
Tags: how to, sensing resistor