Hi all, this is my first instructable documenting the creation of my project, the Arduino UNO BASIC shield which turns the Arduino UNO into a computer running the BASIC programming language.
As microcontrollers are essentially low performance computers on a chip (they have a processor, RAM and ROM) they can be used to create small computer systems. The aim of this project was to use AVR microcontrollers to create a computer capable of running the BASIC programming lanuage.

During learning about the Arduino and creating various sketches, I came across the TinyBASIC project which turns the Arduino into a computer by running a BASIC interpreter. After testing the TinyBASIC sketch on my Arduino UNO, I found the available program memory to TinyBASIC to be fairly low at around 1KB which led me to purchasing an ATmega 1284P. After successfully getting TinyBASIC to run on the 1284P, I found the program memory available to be more than 13KB meaning more than a 13x increase in available memory compared to the Arduino UNO. 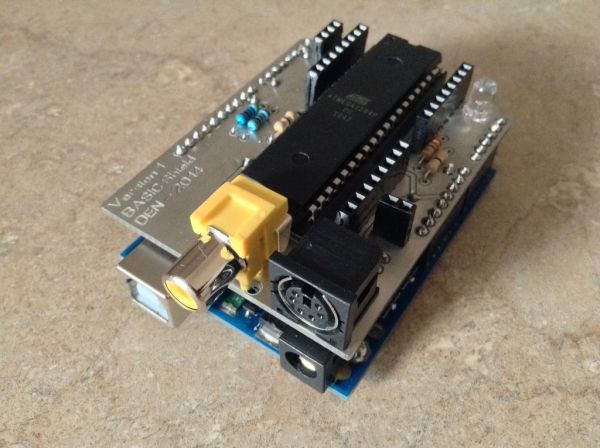 I decided to use the Arduino UNO which is based on the ATmega 328 to run the TVout sketch while the 1284P would run the TinyBASIC sketch (with the PS/2 library included); it was done this way around to give TinyBASIC the maximum amount of SRAM possible as TVout requires a RAM buffer.
I knew from previous projects that TVout runs fine on the Arduino UNO and after testing TinyBASIC with the PS/2 library on the 1284P (which worked correctly) I decided to place all components on an Arduino UNO shield.

READ  Getting character LCDs to work at 3 volts