A bit of background. My brother came to me with an odd box that a friend of his asked someone to make so that they can determine the fastest contestant to push a button. The box consisted of some LEDs, two buttons, and two sets of bicycle bells that made some weird noises. It did light up and make noises, but it did not actually serve the purpose it is made for, which is to actually determine the first competitor to push the button. I told him that I can help, and I searched for an tutorial or a tutorial to make something of the sort using Arduino, however, not knowing the exact name of what I’m searching for didn’t help much, so I set on making one combining whatever it is that I know about Arduino which is not much. Once I finished the project, I found out that it is called a quiz buzzer system (I was searching for a competitors button box), and that there are some cool samples in tutorials that could have saved me a lot of time, but I managed to make something, and I would like to share it with everyone, so here it goes.

As a proof of concept, I had to prototype the whole thing. I used the following items:

So I am not interested in jailing the nano in a plastic box for eternity. I will make an Arduino on breadboard to do the job, and for this, the components are as follows.

READ  How to Shrink Your Arduino Projects: Making a Permanent Circuit Board

For the circuit I used:

The tools I need are a soldering iron, solder, and access to a CNC machine.

To be able to make sense of the loops and actions that will take place. I drew it on paper, but I think this is a clearer view of the way I envision the whole thing to work. 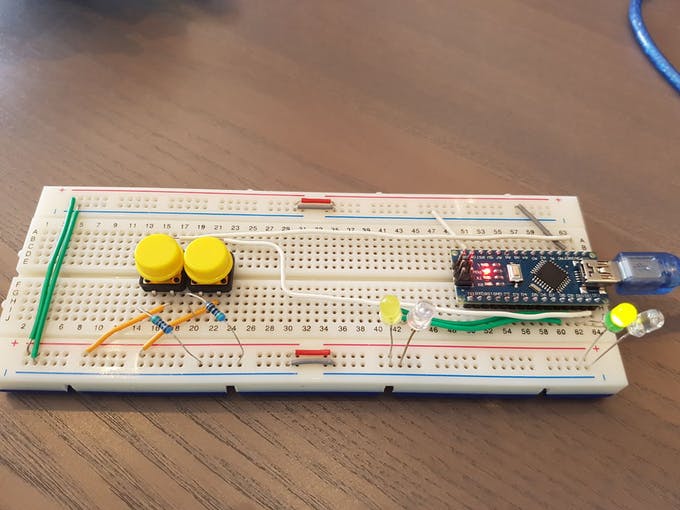 I used the components I had to wire the prototype. It goes this way:

Now you need to figure out the pins you will use. In my code I used the following pins:

READ  Flicker up to 6 LEDs with Arduino

In this tutorial we will show how to build WiFi internet connected switch connected to EasyIoT Cloud. We will use...