Waveform generators (also called function generators) are useful for testing and debugging circuits.  I often use them to test the frequency response of electronics components like op amp and sensors.  This waveform generator is powered by an Arduino.  It outputs four waveshapes: sine, triangle, pulse, and saw, each waveshape ranges in frequency from 1Hz-50kHz.  The frequency, pulse width, and overall amplitude (gain) of the waveforms is controlled by three potentiometers.  I’ve also included (optional) indicator LEDs that let you know which type of wave is currently being sent to the output. 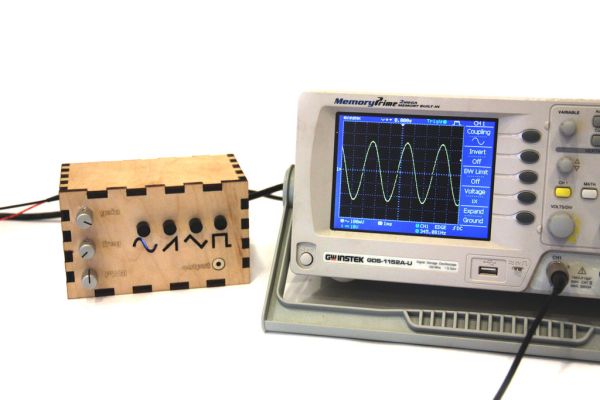 READ  DIY wattmeter with an Arduino

The Arduino Proto Shields are a convenient way to attach circuits to an Arduino, but I like to trim them down a little bit first so they do not take up so much room in the project enclosure.   Start by trimming the pins down with a pair of wire cutters.  Next, cut off the six pin socket.  Finally, cut the sockets from the top of the board.

I decided to laser cut a custom enclosure for my project.  I designed the enclosure using AutoCAD, Autodesk 123D Make, and Corel Draw, and I’ve included corel draw and adobe illustrator 2D files as well as the STL, and DWG files from this process below.  If you do not have access to a laser cutter, you can use my 2D files a guide and drill the necessary holes in a project enclosure of some kind.  Figure 4 shows the holes that should be drilled on the front panel: 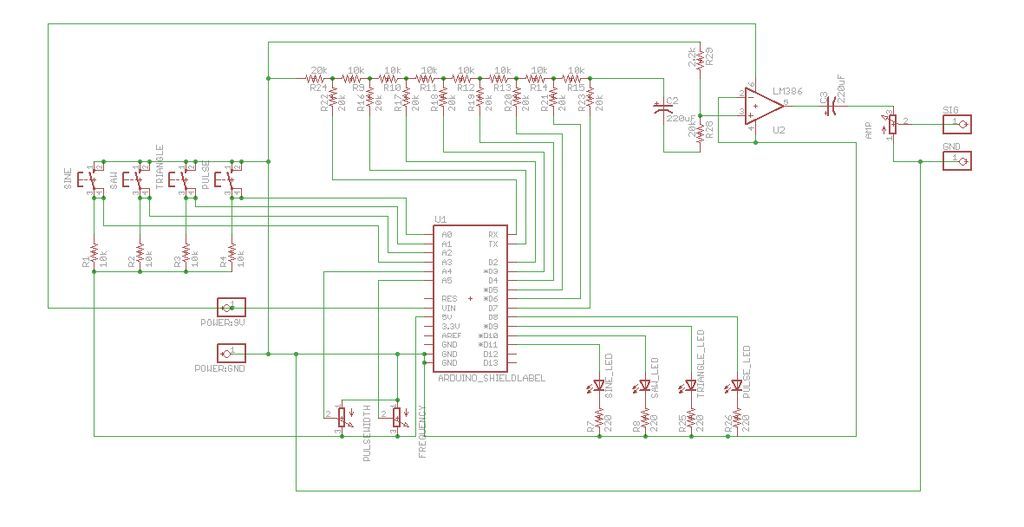 I made my project enclosure out of wood, so I had to glue all the pieces (except the bottom) together with wood glue.  I will attach the bottom panel on later in this instructable.

Solder a 10kOhm resistor to one lead of each of the four push buttons.  As shown in the second image, solder a green wire to the junction between the button and the resistor and a red wire to the other end of the resistor.  Solder a black wire the the second lead of the push button.  It’s a good idea to cover these connections with a bit of heat shrink to prevent short circuits (fig 2).

Unscrew the plastic casing from the audio jack.  Solder a red wire to the two stereo out pins and solder a black wire to the ground pin (fig 3).  I used hot glue to prevent short circuiting the jack and to give the soldering joints some extra support.  Finally, mount the audio jack in the enclosure with super glue.

This project was built for my introductory electronics class at the University of Waterloo in Canada.  This was my first...