I created this Theremin like device after seeing this article in Make magazine: http://m-cdn.dashdigital.com/make/vol15/?pg=69#pg67

While this looked pretty straight forward it turned out to be a bit much for me at the time.  But after much effort, I got it to work pretty good.

I had trouble getting the laser to aim correctly so I chose to mod a zapper I had available to hold the laser.  This worked well.

So I will recap the steps: 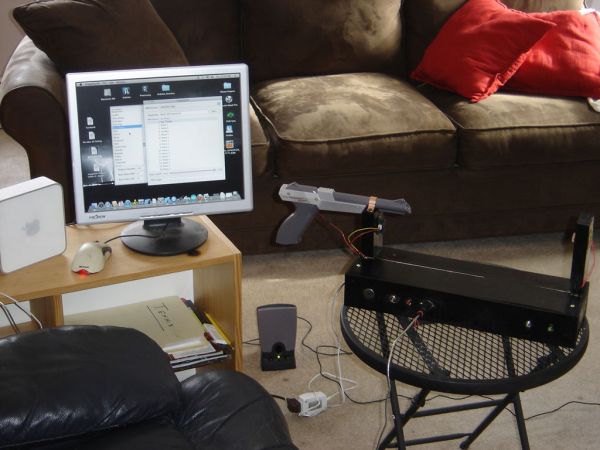 Step 1: Video of finished and working

I found software for the Mac that is fun to play with. SimpleSynth has many different instruments or events that the midi stream emulates.
Here I am randomly choosing different styles .

I expect it would work nicely with any other midi player.

Parts that are needed:

Basically I used the parts list that is on the first page of the Make Magazine article.  But that list is for the harp which has 6 lasers so most quantites can be just 1..

1. Arduino – I used a Diecimila
2. Inexpensive laser pointer – I got a red one from eBay for a couple of dollars
I was hoping to be able to see the laser but have learned that red will not show up unless it is quite powerful.
So it might be better to have a green laser instead of red.

Also a midi cable to connect the Theremin to a MIDI device eg a computer running software that can interpret MIDI input.   I got one from eBay for about 10.00.

The Make article refers you to this link http://makezine.com/15/laserharp/   .  You can then download a zip file with schematics.  I have photoed them and attached here.

As I am new to this I had to do a lot of head scratching and trial and error to get things working .  But I believe i learned a lot.

I did bread board this but I did not take pictures at that time .

To make it simpler for me to understand, I separated the major parts onto separate circuit boards.

It seemed to make it easier to follow the flow of the schematics, at least for me. 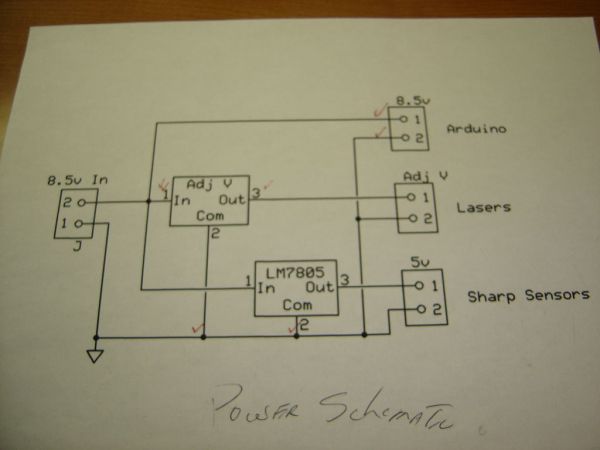 For more detail: Theremin with Zapper,laser,Arduino