Web-enable your interactive sensors over desktop, smartphone and tablet devices.

This tutorial describes in detail how to use the free SensorMonkey service to remotely control a pan and tilt webcam attached to an Arduino using nothing more than a simple webpage. The webpage can be viewed on any desktop, smartphone or tablet device with a compatible web-browser. I use the jQuery UI library to provide interactive pan and tilt controllers and Justin.tv to provide the live streaming audio/video output captured by the webcam. No server-side coding or Ethernet shield is required. 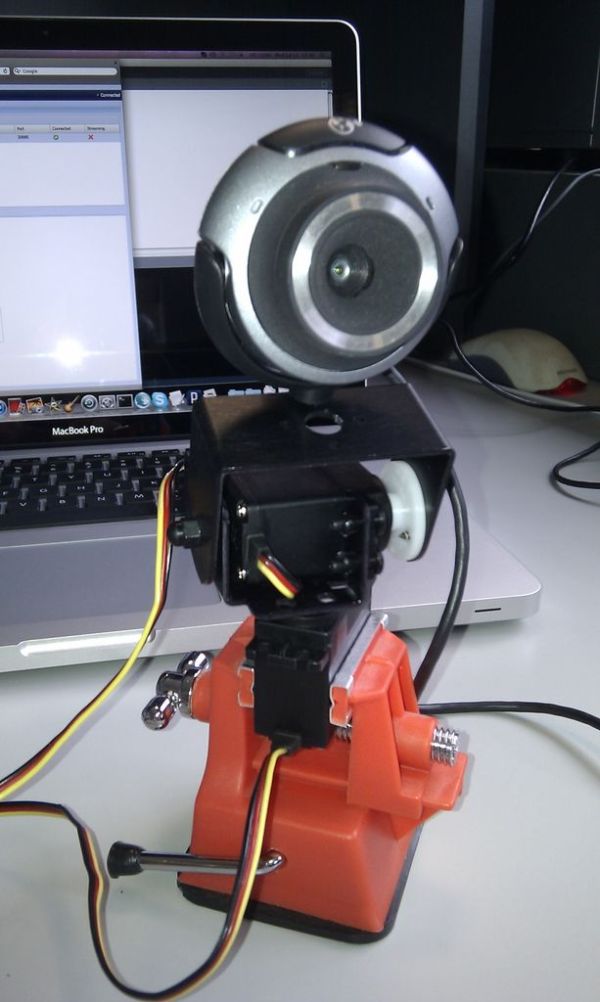 In a previous tutorial, I described in detail how to use SensorMonkey to push real-time sensor data from an Arduino to a webpage for visualization using Processing.js (Disclosure: I co-founded the company developing SensorMonkey). I used an accelerometer to sample motion data and published it live over the Internet for people to view its output. The resulting webpage could be embedded into an external website to act as a real-time streaming widget. Communication was uni-directional; the data flowed from the Arduino through SensorMonkey and into the webpage. This tutorial demonstrates the opposite; namely, the data flows from the webpage through SensorMonkey and into the Arduino.

Important! Although not strictly necessary, it is recommended that you have read the previous tutorial in this series (at the very least, you should be familiar with the basic workflow used to connect an Arduino to SensorMonkey).

The following combination of hardware and software is required to complete this tutorial:

You can buy the servos and mounting brackets separately or as a single kit.

The 9V batteries don’t last long, so if you want to setup your webcam for an extended period of time you’ll need to hook it up to a persistent external power supply such as a wall-mounted DC adapter or a high-power density LiPo battery.

Alternatively, you can power one of the 2 servos using another Arduino connected to a different USB port.

First, I build the pan and tilt assembly by attaching the servos to the mounting brackets as described here (if you’re using different components, please follow the relevant assembly guide(s) for your particular servos and mounting brackets instead).

Next, I attach the webcam to the top of the tilt servo’s mounting bracket. In my case, I simply had to remove (unscrew) the universal attachment base from the bottom of the webcam and screw the device into one of the holes in the mounting bracket. Depending on your webcam, you may need to attach it by some other means (you can always use sticky tape if all else fails!).

To stabilize the whole assembly, I place it into the plastic mini-vice and fix the vice to a flat surface (i.e. the top of my desk). Again, depending on your components, you may have other requirements. As long as the webcam can pan and tilt without falling over that’s all that matters.

Finally, to control the servos, I upload the following sketch to the Arduino’s microcontroller using the development environment: 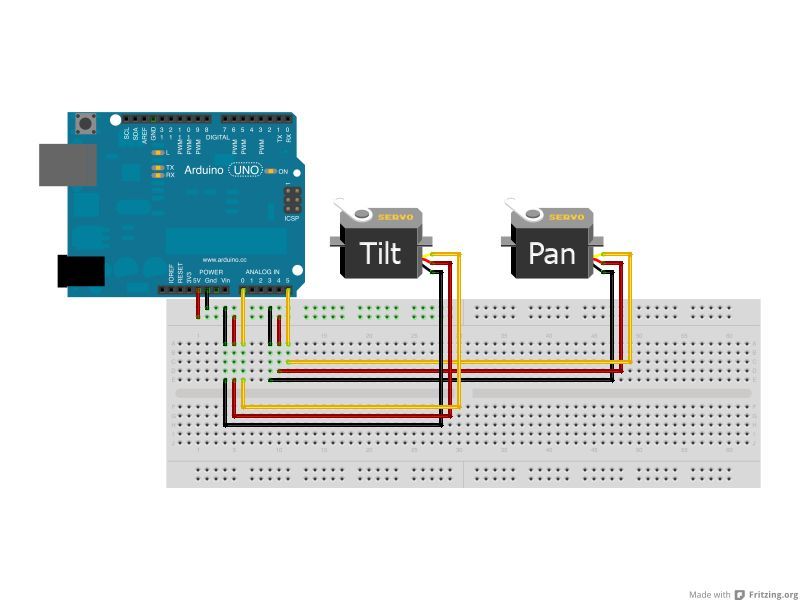 The sketch is very basic. It opens the serial port and reads bytes one at a time. Each byte is assumed to contain a pan and tilt rotation pair; the high 4 bits are the pan rotation (0 to 15 inclusive) and the low 4 bits are the tilt rotation (0 to 15 inclusive). This gives 16 different levels (i.e. 24) to choose from with respect to each dimension of motion and makes it easy to encode the webcam’s position using hexadecimal character pairs. Each servo has a range of 0 to 180 degrees. So, for example, a hexadecimal character pair of 7A means 7/15 x 180 (84 degrees) on the pan axis and 10/15 x 180 (120 degrees) on the tilt axis. A hexadecimal character pair of 00 encodes a 0 degree rotation on both pan and tilt axes, while FF encodes a full 180 degree rotation on both pan and tilt axes. The mapping for each character is shown below:

If I needed fine-grained control of the servos’ motion, I could encode the pan and tilt rotations as separate bytes. In this case, however, using a single byte only is an efficient means of encoding the co-ordinate system for controlling the two servos and provides adequate motion range for a simple webcam.