With this project you can build an RFID time-clock system to keep track of employees, children and more. 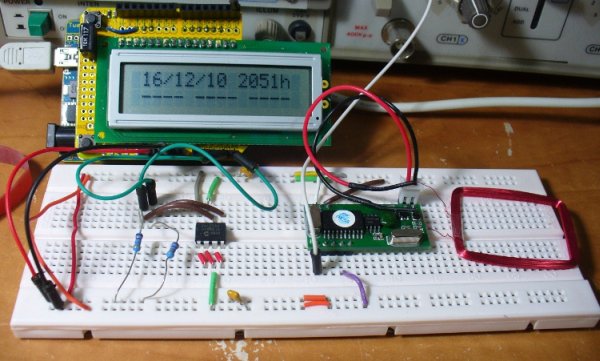 Recently I was listening to a friend who has three teenage children, of whom needed to arrive home before their parent. Unfortunately the parent needs to work all day and arrives home in the evening, and they lamented not being able to check when the children had arrived home.

After a few hours it occurred to me that a simple time clock would solve her problem – each child could check-in upon arriving home, and the parent could review the check-in times later on. And thus the kid-e-log was born.

From a hardware perspective, it would be quite simple. An LCD screen, RFID reader and some tags, and a real time clock IC such as a Maxim DS1307 – all running from the ubiquitous Arduino board. After some contemplation it occurred to me that smart kids might try to mess up the hardware by pulling the power, so it also uses an EEPROM to store time data which is impervious to power loss, and the kid-e-log will not have any user buttons. After initial programming for time and RFID key data, any changes will need to be effected by the programmer (i.e. me).

If RFID is new to you, review my Arduino tutorials before moving forward.

Before jumping ahead and making something, we discussed exactly what the function would be. Each child would have an RFID tag, and when it is read the hardware will save the arrival time in memory, and display it on the LCD. The time data will be reset automatically at 0400h or by reading an RFID card belonging to the parent. There will not be any buttons, and the hardware must be power-failure resistant – therefore EEPROM memory is needed for time data and a backup battery for the real-time clock.

The DS1307 and the EEPROM are both using the I2C bus, and the RFID reader (more information) uses Arduino digital pin zero (serial input).  The LCD is pretty straight forward as well, as described in the tutorials.

Here is the schematic for the prototype hardware:

From a software (sketch) perspective, the design is easily broken up into distinct functions which makes programming quite easy. The sketch is a basic loop, which follows as such: 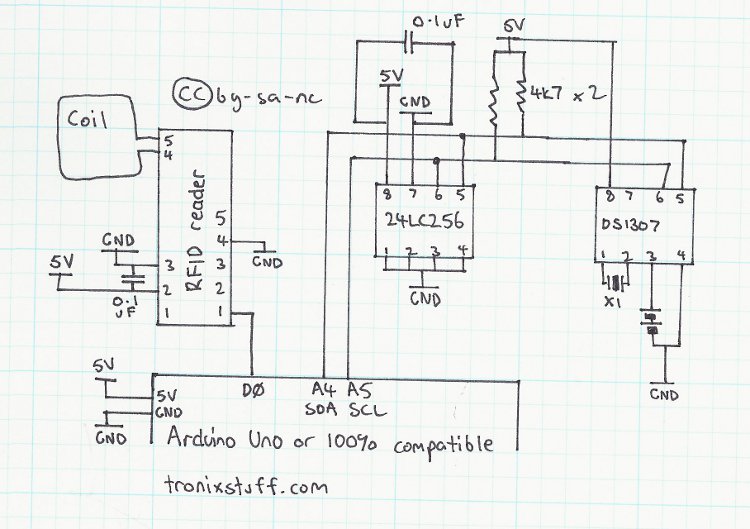 From each of those four main instructions, functions are called to handle various tasks. For example the displayData() funtion is used to read the DS1307 real time clock, and display the time and date on the top line of the LCD. Then it reads the contents of the EEPROM, and displays the check in time for each RFID tag – or a line if they have not checked in yet.

From a hardware perspective, the requirements are quite simple: