Yet Another Arduino 110v Power Controller

This Instructable shows you how to build a four-gang outlet box in which each outlet is controlled via an Arduino (or any other TTL level signals).

It differs from the other relay boxes in that it uses no circuit boards and has very few parts (one chip and 4 relays). 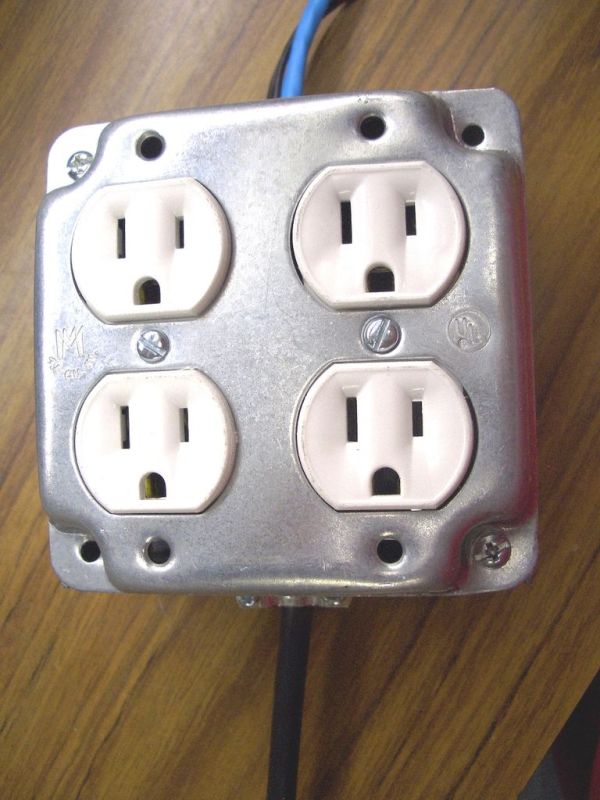 Materials:
Deep metal 4 gang output box and cover
Wire clamps
Two 15Amp outlets
Four 5v 10Amp relays (such as Jameco’s 843155)
A ULN2803A (such as Jameco’s 34315)
A 5volt – 500ma Wall Wart (such as Jameco’s 164101)
A length of 5-conductor wire (I used Cat5 cable)
Household current rated wire with a male three-prong connector at one end.
Miscellaneous wire and solder
5 minute epoxy
Wire Nut
Theory of Operation:
The electricity flow to each outlet of a four-outlet household current box is controlled via TTL level signals (such as the output pins of an Arduino).  Five wires are connected from the Arduino to the outlet box, four wires being connected to four Arduino output pins and the fifth to the Arduino’s ground pin.  A separate 5 volt wall-wart is used to power the outlet box (the outlet box relay activation coils will consume nearly 500 milliamps and a separate wall wart is used here so as not to stress the Arduino power supply).  The TTL control lines are wired to the inputs of the ULN2803A which can handle the relay coil current needs and also contains diodes to safely manage the back EMF produced by the relay coils when switched off.

Warnings:
Household current can be dangerous to your equipment, both electrical and biological!  Having control and power wire in the same enclosure can expose the connected circuit to damaging voltages in the event of part failures.  I make no claims or warranties, etc, you assume all of the risk should you attempt this build.  Those attempting this build are either knowledgeable or foolish, or as in my case, a little bit of both.

Step 3: Wiring the AC portion of the outlet box

In US household wiring, the green wire is ground, the white wire is return, and the black wire carries the power.

I begin by breaking off the four metal tabs attached to the outlets.  These tabs are used to secure the outputs in a different enclosure and are not used for the metal enclosure.  The tabs have a little crease in them which helps the user remove them.  Remove the 4 tabs from each of the outputs by bending them with the needle nose pliers until they break off.

Next add a small wire connecting the ground terminals of the two outlets together just like we did for the white wires above.

I mix up a small amount of quick-set epoxy and I then epoxy the four relays to the backs of the AC outlets.

You may also epoxy the ULN2803A to a clear area on one of the relays.  Be careful to remember the part’s orientation so you know which pin is pin 1, etc.

Be sure to wait until the epoxy is fully cured before proceeding.  I waited 24 hours myself.

Next attach an 8 inch piece of black wire to each of the relay’s common pin.  You can epoxy this wire to the outlet case as well to relieve the strain of the wire on the relay terminal pin.  Again, wait until the epoxy cures before proceeding.  (As you can see from my pictures, throwing caution to the wind I did not provide this strain relief.)
Next prepare the metal box by knocking out two of the punch out holes and installing the wire clamps.  Feed the 3 prong male plug through one of the clamps and attach the green ground wire to the ground wire on the outlets.  Now attach the white wire to the other accessible ‘silver’ terminal of the outlets.  Using a large wire nut attach the four back wires to the black wire of the 3 prong plus.  (Again I did not follow my own advice as I didn’t use a wire nut, I soldered the wires together and used electrical tape to wrap up my soldierng mess.)

At this point you may use a generous amount of electrical tape to cover up any exposed wire which carries AC household current.  If you choose not to perform this step you can easily get ‘bitten’ by the electricity should the 3 prong plug get plugged in while the box is not closed up.  I did not do this here since I wanted to keep everything exposed for the project pictures. 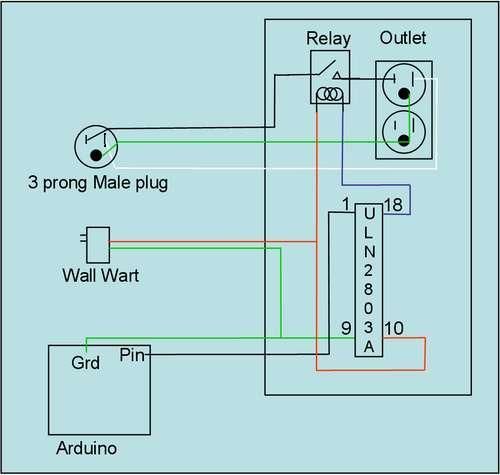 Feed the wall wart power cord and the 5 strand wire through the second wire clamp on the metal outlet box.  I used some spare Cat5 wire I had which contains 8 conductors and I cut the ones I didn’t need.

For more detail: Yet Another Arduino 110v Power Controller

How it all begun Hi, my name is Alex Sardo. I am the founder of World Class Technologies an innovative...