How to Send Message from GSM Module using Arduino

The GSM stands for Global System for Mobile communications.  This is a global standard which is followed by the GSM modules inside the cellular phones which enables them to be connected with any mobile network around the globe. In certain applications the microcontroller based systems has to be connected with the GSM network which will enable a user to control the system by sending messages or making a call. The systems can also send messages to the user to alert or inform about the status of the system running.

In all such cases a separate GSM module is used rather than using the mobile phones. The advantage of using a GSM communication with a system or device is that the user can control the system wirelessly no matter how far it is kept compared to any other wireless communication, provided that both the user and the device should be in a cellular coverage area. 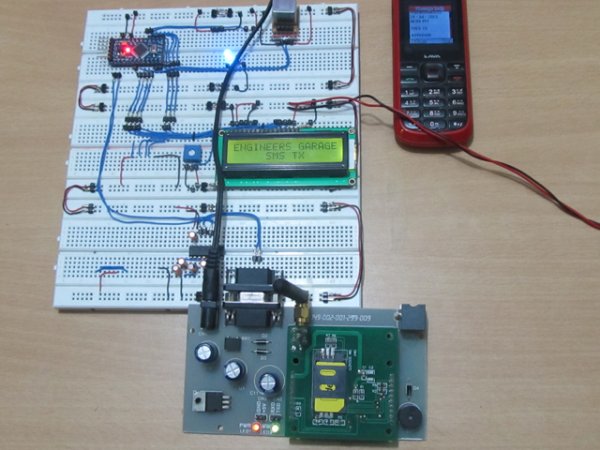 This particular project demonstrates how to interface a GSM module and send SMS to other mobile numbers using an Arduino board. The AVR microcontroller boards which are provided with all the basic circuitry for the operation of the microcontroller which has been flashed with the Arduino boot-loader are called Arduino boards. The Arduino IDE is so simple to use that anyone who has basic knowledge of c programming can quickly get started with it. The project on how to get started with the Arduino  explains about the steps required to get start with an Arduino board. The Arduino can communicate with the other devices using its digital I/O, serial port, I2C port, SPI port etc. and in this project the GSM module is interfaced using the serial port of the Arduino board.

READ  Autonomous drone that you already have in your pocket!

It is assumed that the reader has gone through the project how to get started with the arduino and tried out all the things discussed there.

The GSM module used in this project is a SIM900 based module which can communicate with other devices using RS232 serial communication port. It works on 9V power supply and the image of the same is given below:

GSM modules respond “OK” when it receives the command “AT” and it is the best way of check communication between the module and the microcontroller.

AT+CMGS – This command is used to send the SMS from a GSM module. The command should be followed by the number to which the message needs to be sent. After a Carriage return one can send the SMS text to the GSM module which is then send after it receives a <CTRL+Z>

The syntax for sending a SMS using the AT commands with a GSM module is shown below; 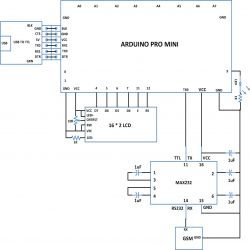 The code is written in such a way that it will automatically send exactly the same commands to the GSM module using the serial communication functions and hence making them to send an SMS to the specified number in the code. The ENTER key is represented in the code using ‘\r’ and the CTRL+Z is represented using an ASCII value of 26.

Try to send the command using the PC with the help of any serial monitoring software and make sure that the module is sending message to the specified number. Then one can verify and upload the code which can send the same commands to the Arduino board as explained in the project how to get started with the Arduino. Once the board is reset after successfully uploading the code the Arduino sends the same command to the GSM module enabling it to send SMS to the number specified in the code.

For more detail: How to Send Message from GSM Module using Arduino

MultiMovEDIA – Description of my Project

The title “MultiMovEDIA” does not mean much – if anything – at first sight. However, looking at more carefully, we...