I was looking for a way to handle wireless communications between two Arduino boards. Other options like Xbee or Bluetooth were going to cost $50 to over $100. Then I found a cheap RF transmitter and receiver at Sparkfun. The total cost is only $9! 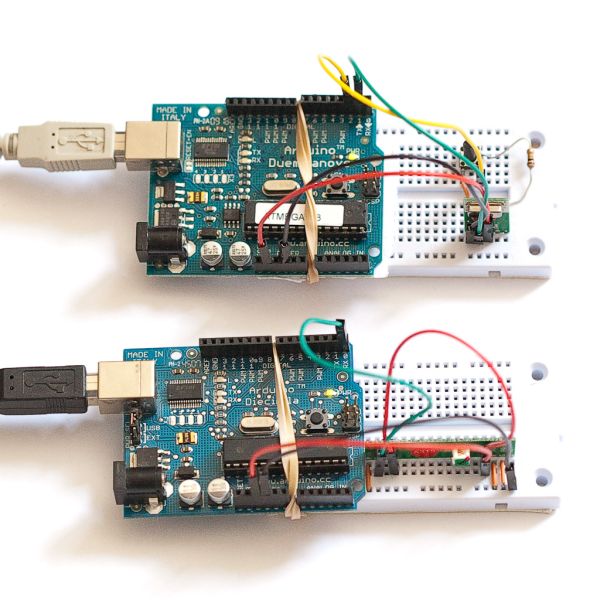 Here are a few limitations to RF solution:

The advantages are that it is cheap and it is pretty easy to use.

Below are some images showing how I hooked up the receiver and transmitter to two different Arduino boards. When wiring the receiver/transmitter you only need is to give them power/ground and then a pin for the TX (serial transmit) or RX (serial receive) pin. I also wired a button to the Arduino doing the transmitting, and used the LED on pin 13 that is built into my Arduino boards on the receiver so I could test this setup. The test app just flashes a button on the receiving board when a button is pressed on the transmitting board.

Since the receiver is constantly picking up random noise I add a few extra bytes to every data packet. I add two bytes to signify the start of a data packet. Then I send the a byte address. This address allows multiple devices to work in the same area without interfering with each other. Next is the data (in my example code it’s an unsigned int (2 bytes). Lastly I send a checksum which is a simple xor of all the data bytes to make sure the data got received without being corrupted.

Major corrections and additions made 9/9/2014 For my off-grid Ham Radio and Solar projects, I needed a way to measure...