When I finished the  “RevIO” – an Arduino Clone that has the different way of exposing pins usage. I decided to go further to the next project. To test my “RevIO” board that it could do the bigger task than just blinking the LED! 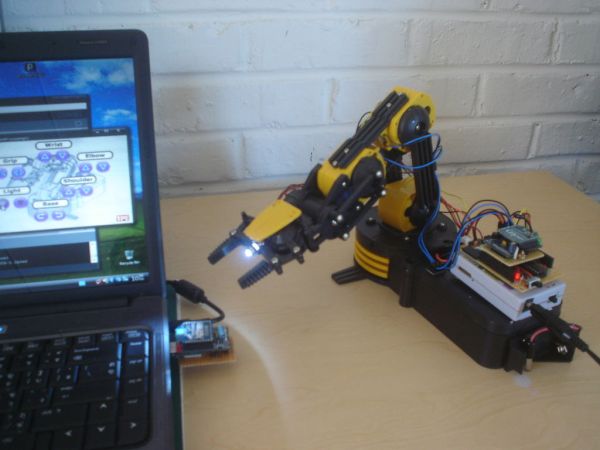 This instructables introduces the way I constructed Three-Motor Driver ICs PCB from scratch. Then using it as the “piggy back” on my “RevIO” Board.

To control the Robotic Arm, I designed the GUI (Graphical User Interface) with the Processing on the PC and Arduino sketch for driving the motors.

Again I am going to use the same presentation method as Build “The RevIO” (Arduino Clone) My Way,  to build the board using the graphical illustrations, together with the photos of actual build of the board.

I got the Robotic Arm Edge Kit from TPE Shop in Thailand three months ago, while I was visiting my family in Thailand. But I did not do until I got back to USA a month later.

This is my very first Robotic Arm I ever encountered with. A week after I got back, I started to constructed the kit. I spend about four hours to build and pause to take pictures for this instructables.

I will not show you how I managed to put the kit together, but here is the collage of how I put the Robotic Arm together from the start to finish!

The RevIO or any kind of Arduino
Note: In case of using Arduino or others Arduino Clone you needed to make the Motor Control Board to match those Arduino.

As mentioned in the intro. I planned to use this motors driver board as a “piggy back” on the RevIO PCB. So I obtained the same PCB (Radio Shack #276-150) to match my RevIO’s exposed pins. I tried to use the plain PCB (Radio Shack #276-149) so I could put the three H-Bridge Motors Drivers in parallel to the width of the PCB, but that did not worked! Because the holes on the width side was one hole short of the RevIO. 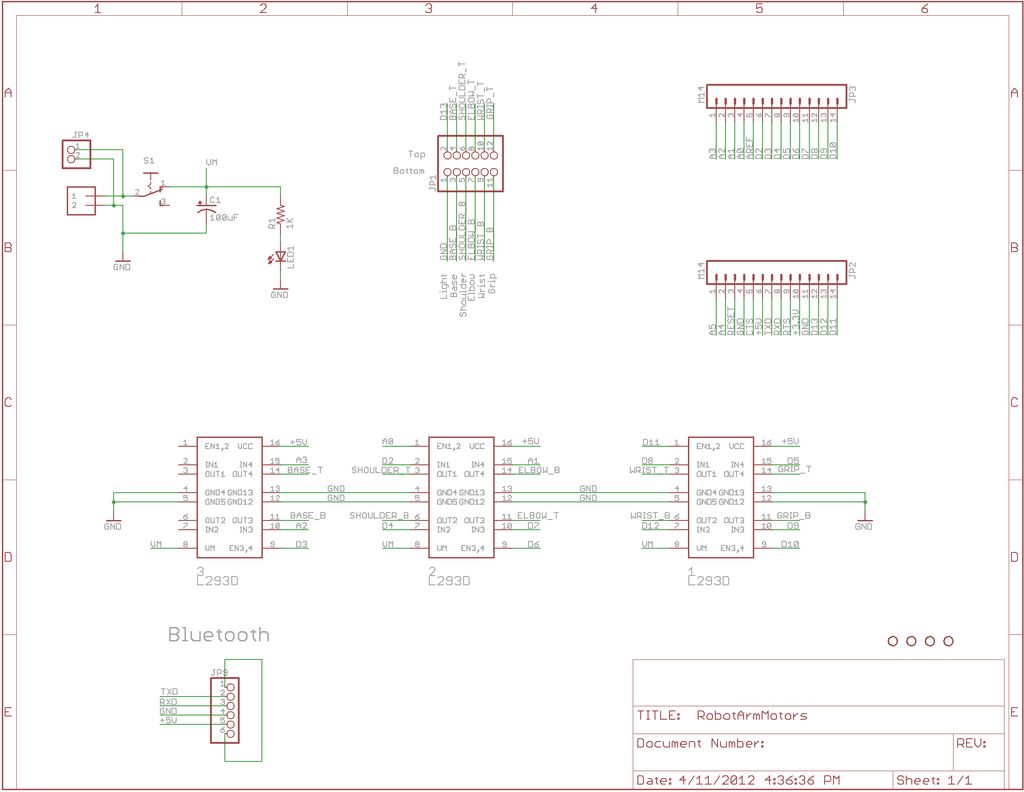 Luckily, I could fit three H-Bridge Motor Drivers IC on the Multipurpose PC Board with 417 holes (Radio Shack #276-150) by put them one after another over the positive and negative rails in the middle of the board.

The other good thing was that there were enough space to put 2×6 male header, for motors control pins and led on the board. So I place them on the top left corner of the board next to the top 14-pin rail. And also there were enough space to put a 6-pin connector as an alternative for Bluetooth breakout board. (Bluetooth Modem – Blue SMiRF Gold (Sparkfun# WRL-10268) or Bluetooth Modem – Blue SMiRF Silver (Sparkfun# WRL-10269)) . So I placed it on the bottom right corner of the PCB.