This is an extremely cheap IR proximity sensor you can make with a few cheap parts and an AVR programmer. I use an Arduino as my programmer in this Instructable.

This sensor only has a range of about 3 inches. You can easily add more LEDs or brighter ones to extend the range. You can also easily re-arrange the LEDS to detect when a beam is broken as well.

The design takes advantage of a cheap AVR (computer on a chip). The computer pulses the IR LEDs off and on and compares the analog readings from the sensor in each state. When the reading with the lights on is above the reading with the lights off the sense pin goes high indicating the sensor is seeing it’s own (reflected) light. There is an LED on the sense indicator in this design so you can see when the sensor engages. You can connect the signal right to a microcontroller like an Arduino or Picaxe.
This design moves some processing out of your main robot brain and into it’s own node. You may want to debounce the signal, but you don’t have to flash the leds and take the readings. You can also use just one digital pin to take the reading. The sketch is around 700K out of 1024 available. 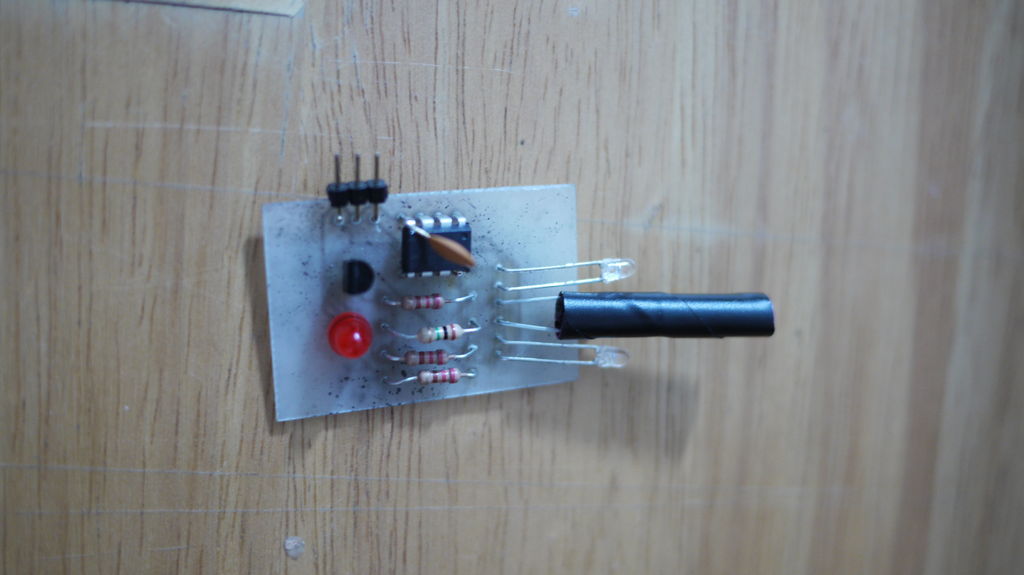 Why I built this
I’m way out of high school, but this is part of a series of designs related to bringing the robots from the game Robot Oddysey into the real world. I want to allow grade schoolers the same chance to learn robotics I had. So I am working on building really inexpensive robots that can move in 8 directions without turning. The “bumpers” are complete now.

The electronics you will need are as follows. Digikey part numers and prices are as of 4/18/2012.

You will also need

You don’t want IR light leaking in from the sides of the sensor. We will create a little tunnel from electrical tape and a straw. My tape is opaque to IR. Yours probably is too but you can line it with aluminun foil if you want to be sure. Make sure no metal is exposed because it will ruin the circuit.

Cut off about 1.5″ (4cm) of the straw. Wrap it in electrical tape. Trim the ends and make it neat.

Cut about 1/2″ (8mm) bit of tape and roll it up from the short edge. Fold the roll in half. It won’t stay but put a good crease in it. This will plug the bottom of the sensor and keep stray light out that way.

Cut the middle leg off your phototransistor if it has one. It’s not needed in this design and can actually cause problems if you leave it on. You don’t have to cut it all the way back, but don’t leave very much.
READ  Simple mass storage for your microcontroller project using arduino

Gently wiggle the sensor into the straw until the base is 1/4″ (5mm) in or so. Push in the folded roll of tape behind it and seal the back with a bit of tape. 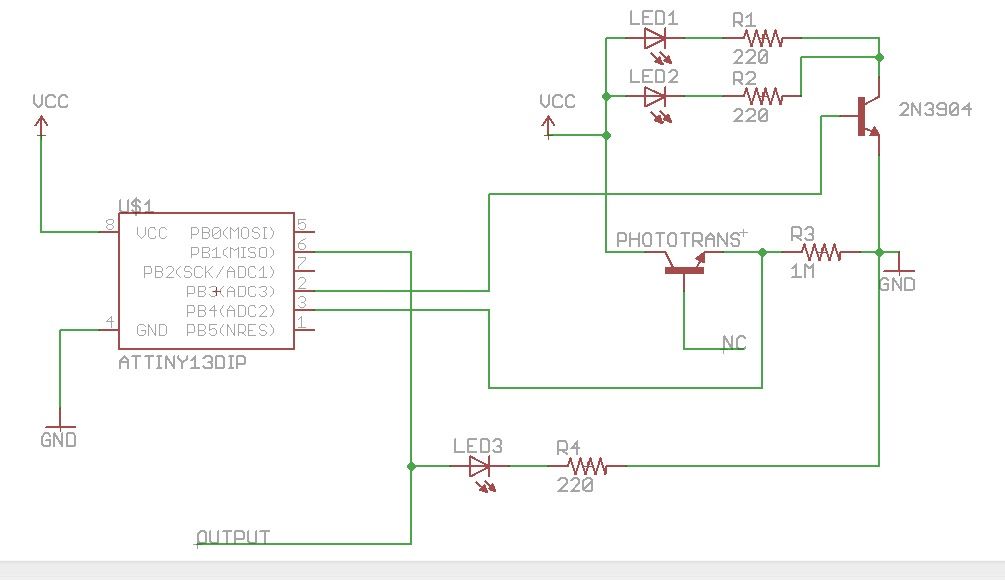 Follow the wiring diagram and keep some notes in mind.

Note: After I did this diagram I discovered a 0.1uf capacitor across the Attiny chip from VCC to GND helps out with stability. It’s recommended to put one across every microchip in a design. It worked reasonably in the breadboard without it, but the circuit board really improved with the addition.

The small DC motor, is likely to use more power than an Arduino digital output can handle directly. If we...