Almost inevitably, when I try to climb the same route I’ll forget exactly what sequence of holds they used and end up following a slightly different path. Even when I remember exactly which course to follow, I’ll still wonder whether I’m doing it as quickly as the previous climber. Yes, I know that skill in climbing isn’t all about speed, but I’m competitive like that.

That’s how I decided to make a device that could record the precise route a climber follows when climbing a wall or a rock face, then play it back in such a way that another climber could follow it while climbing and, if they felt so inclined, race against it. This concept will no doubt be familiar to anyone else who grew up playing Mario Kart’s time trial mode: it is a ghost. 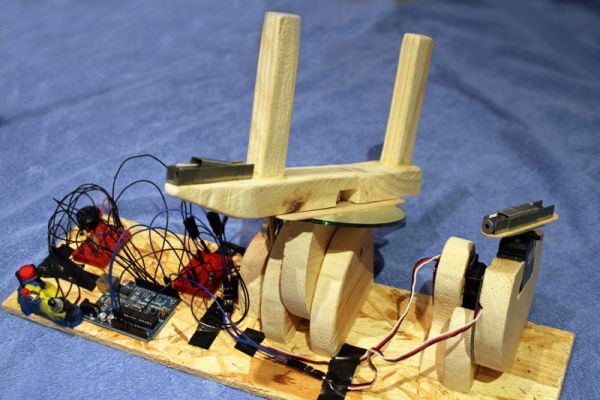 In an ideal world, a ghost climber would be a 3D holographic recording of a climber that would then eerily haunt the rock face, replaying the climber’s exact body motions and speed of progress. In our less-than-ideal world, a ghost climber can be created by accurately tracing and replaying a specific climbing route using a servomotor-controlled laser turret. That’s right: in this situation a motorised laser turret is the simple solution.

Here’s the finished device in action:

My ghost climber device, nicknamed The Redpointer*, can be used in the following situations:

I designed The Redpointer to have three modes:

In this mode, someone on the ground uses a laser pointer to trace out a path up a climbing wall.
E.g. Climber A ascends a route while Climber B stays on the ground and tracks Climber A’s progress with the laser pointer. The Redpointer then records exactly what route was followed.

Here, the route recorded in Mode 1 is played back in real-time, projecting a laser point onto the climbing wall to illustrate the path of the previous climber as a “ghost”.
E.g. Climber C now turns up late to the climbing session. Climbers A, B and C all stand back and watch the laser turret replay the route Climber A took when recording in Mode 1. Climber C now knows where to climb if she wants to imitate A.

This mode is a combination of modes 1 and 2 and is designed specifically for competing against a previously set route. Once a route has been recorded in Mode 1, another climber can race against it in Mode 3 and be given live feedback saying whether he/she is ahead of or behind the pace set in the recording.
E.g. Climber C now climbs the same route as Climber A, while Climber B uses one laser pointer to track C’s progress. Meanwhile a separate laser pointer illustrates A’s ghost on the same wall so that C can tell if she is winning or losing the race. Every time C overtakes A’s ghost or is overtaken by A’s ghost, a buzzer sounds. At the end of the route, The Redpointer indicates whether A or C won the race.

There are a few serious safety issues to consider before beginning this project. Please do not skip to the next step without first carefully considering these.

Rock climbing is inherently dangerous. Obviously, this danger is largely mitigated by the careful use of ropes, harnesses and other safety equipment but the danger is always present. Never go rock climbing if you are not fully competent and confident in the various techniques involved (belaying, leading, rigging, etc.). 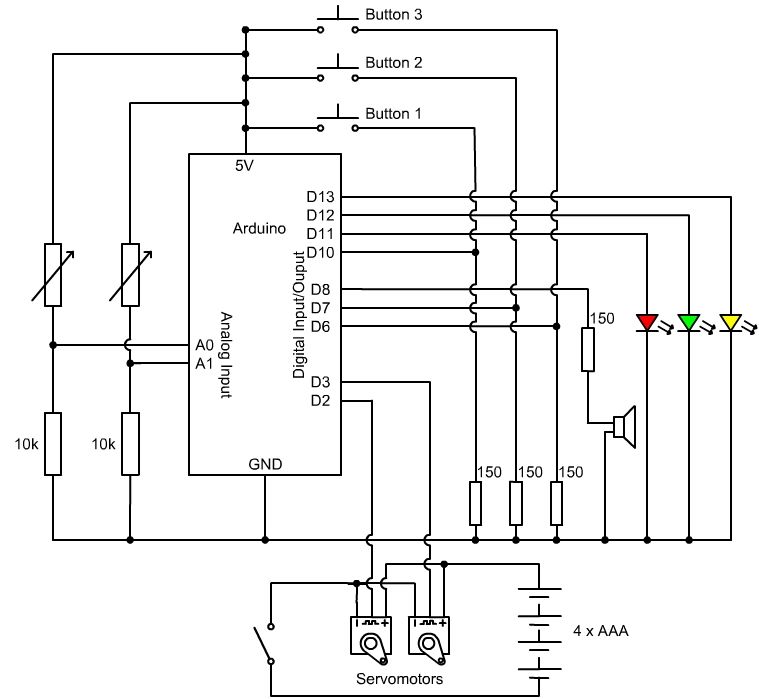 This project involves soldering and working with electrical circuits. Always do both of these in well-ventilated, uncluttered and dry environments, using sensible precautions to avoid burns, fires and electric shocks.

Lasers are also potentially dangerous. This project only uses a pair of Class 2 lasers, about which Wikipedia says the following: