Have you ever wanted to make a line following robot but the infrared sensors were too expensive for you? Do you want to upgrade the robot in my other instructable?

Well this instructable comes in two stages, Stage 1 is the prototyping stage, where you build the circuit on the bread board and debug it for design flaws.

Stage 2 is fabrication where I’ll teach you how to create a strip board product that you can plug straight into your robot. 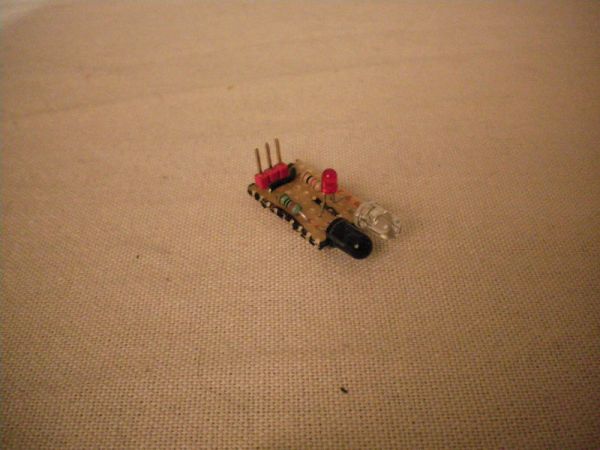 The good thing about this tutorial is you’re able to do many things with these sensors.

Also, if you’re from the UK and have a maplin store near you, you’ll be able to get some IR transmitter and receivers for 99p (They’re side facing LED/phototransistors, so you can have a low-profile sensor module), More on this at the end of the instructable.

You want to take your bread board and your infra red LED’s and photo transistors and place them side by side (1 hole apart) in the bread board, repeat for the other infra red pair.

Now let’s start wiring up the infrared LED’s first, place a 220 Ohm resister in the same row as the IR LED cathode then wire it to ground, and make sure to wire both. Next you need to wire up both of the IR LED anodes to the power rail.

Now we take a wire and connect the anode of the red LED to the power rail. We also need to ground the photo transistors do that now.

Now if you wire in the power supply from the Arduino (+5v and Ground) if you wave your hand in front of the IR LED/phototransistor pairs, you should notice the red LED’s fading from dim to bright and back as you move your hand. If the LED’s are indeed facing back and forth congratulations you’ve completed the basic prototype, you can move onto the next step.

How ever, if you’re not getting any results from waving your hand back and forth you must check your wiring (Maybe your IR LED’s are either burned out or put it in backwards). 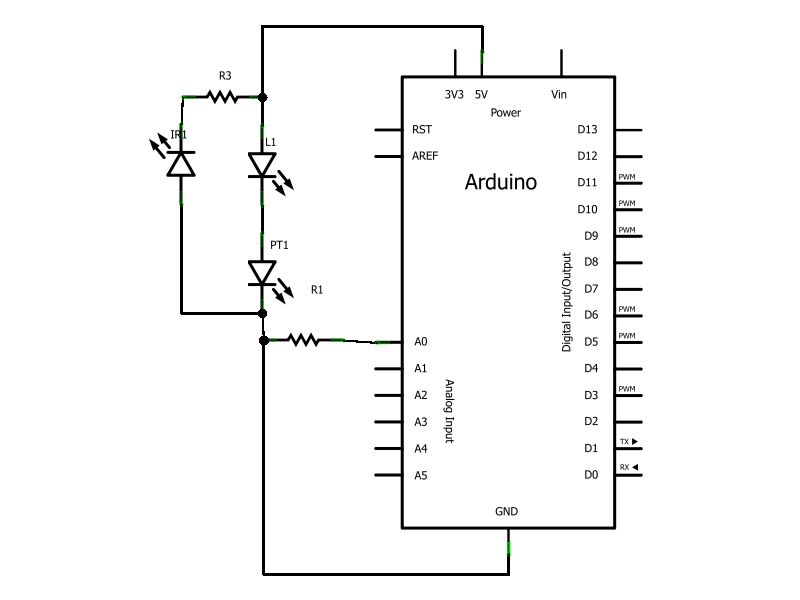 If you want to test out the circuit, upload the following sketch to your Arduino.

Demonstrates the use of IR LED’s for a simple line
following robot, if it leaves the black line it will
attempt to locate it.

The circuit:
* Follow the instructable on how to construct it.