So far in this series we’ve had a diverse look at how Arduino can interact with a range of real-world devices from servo motors to ultrasonic range finders TVs to humidity sensors. Now we’ll see if we could get the Arduino to make a few sounds. We’ll actually do a bit better than that – we’ll look at the importance of pulse width modulation (PWM) to microcontrollers by building our own digital audio player called Auduino.

A few months ago I stumbled across a simple single-button digital audio player based around a Raspberry Pi developed by a guy for his 90-year-old grandmother who needed something simple to use. All it had was a single button and an LED and it was programmed to play digital audiobooks. The button pressed quickly would pause and play while holding it down for more than four seconds would play the previous track. 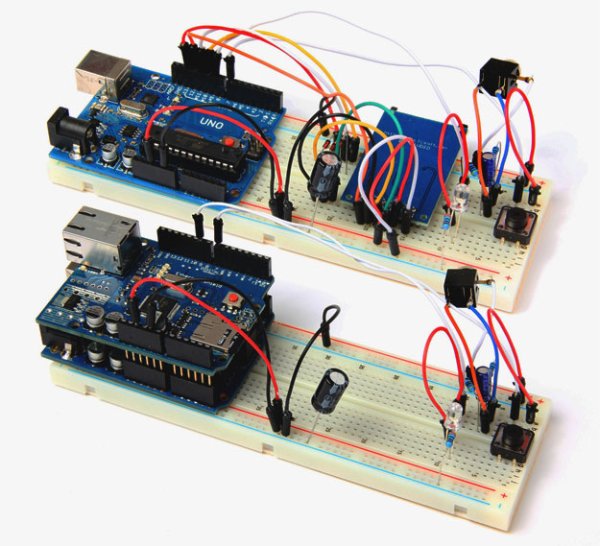 A few months ago I stumbled across a simple single-button digital audio player based around a Raspberry Pi developed by a guy for his 90-year-old grandmother who needed something simple to use. All it had was a single button and an LED and it was programmed to play digital audiobooks. The button pressed quickly would pause and play while holding it down for more than four seconds would play the previous track.

If you’re wondering where you’ll find 19kHz/8-bit/mono WAV files we’ve got that covered. I’ve created an easy-to-use audio converter that integrates into Windows Explorer and converts any audio file into the required WAV format. You can even convert multiple files at the same time and it automatically turns those files into the 8.3 filenames our player requires. All you do then is copy the WAV files to the root of a FAT32-formatted Class 4 SDHC card (we’ve tested cards up to 8GB). Load the card into the player’s SD card reader module press the button and the first track will begin playing.

The ability to turn digital data – 1s and 0s – into a proportional analogue voltage is a fundamental tenement of digital audio and it’s where the digital-to-analogue converter (DAC) gets its most celebrated use. Audio DACs appear in every smartphone tablet MP3 player PC and laptop. They’re everywhere. DACs are also used to control motors and sensors LEDs and more – anywhere where you need to turn a digital number into a real-world analogue voltage. One of the simplest ways to do it is what makes microcontrollers so popular – it’s called Pulse Width Modulation (PWM).

The problem for all microcontrollers is that their standard digital outputs only have two positions: high and low. The output will either be at the supply rail (Arduino’s 5V) or ground (0V); there’s no in between. This is where PWM comes in. It starts with a clock signal output that runs at a much higher rate than we need; in our case beyond the 20kHz audio spectrum. That clock signal is a squarewave meaning it spends half the time at digital-1 and half at digital-0 in each clock cycle. In geek speak we say it has a duty cycle of 50%.

This is how the pulsating LED on your iPhone or iPad works. The LED will be fed with a PWM waveform that varies between 0 and 100% duty cycle at a high enough frequency so you can’t see the LED flashing.

Your typical music file is the result of the reverse process: turning a complex analogue voltage into a digital representation. Audio CDs capture two channels (stereo) at a 44.1kHz sample rate with 16-bit resolution. What that means is there are 216 or 65536 distinct voltage levels that can be captured every 22.6 milliseconds or so.

It’s called Pulse-Coded Modulation (PCM) and it’s the basic format used by Windows’ WAV file format. Look at a WAV file and you’ll see a long series of 16-bit numbers that represents the audio (one per sample and one per channel). Turning those digital samples back into an analogue voltage is what every audio player does.

One way of doing this happens to be PWM. Remember how we said before that a PWM signal is modulated to create a variable duty cycle waveform? Guess what we use to modulate the clock signal with? The digital audio samples from our WAV file. So what we end up with is a PWM waveform output whose duty cycle is proportional to the PCM audio data in the WAV file. We feed the output into an audio amplifier and hey presto! We hear that digital audio WAV file coming through the speakers.

While we love Arduino this is where we run into its limitations – it only has an 8-bit bus and combined with its limited 16MHz clock speed and our audio code library we only have enough speed to handle WAV files with a 19kHz sample rate and 8-bit depth. That said I’ve worked on our simple audio converter to tweak the encoding so it produces good-sounding files with a better than AM radio frequency bandwidth which is good enough for music and certainly more than enough for digital audiobooks.

Download the ‘auduino.zip’ file from apcmag.com/arduino.htm and unzip it to the ‘C:Auduino’ folder on your C: drive. Launch the ‘InstallWavConverter.reg’ file. This installs a Shell registry key that adds a new menu entry to Windows Explorer’s context menu. (Open the REG file in Notepad and you can see how it works.) Click the ‘Yes’ button to confirm and then ‘OK’ when it’s completed (‘RemoveWavConverter.reg’ deletes the registry key if you wish).

Use Windows Explorer to find an audio file you wish to convert right-click the file and select ‘Convert to APC/Auduino format’. You’ll see a Command Prompt screen appear briefly and when it disappears you’ll have a new WAV file in the original file’s location. You can even select multiple files to encode all at once.

Looking for free downloadable digital audiobooks? Try LibriVox and Books Should Be Free. These are usually in MP3 or OGG format with books separated into chapter files. Our encoder can easily turn these into the necessary WAV format.

Copy this file(s) to the root folder of a Class 4 FAT32-formatted SD card up to 8GB and transfer the card to the Auduino player. Files can be up to 2GB. Power up the player and press the button.

We’re building our prototype this month on the same breadboard we used for our LED dice and weather station projects as it makes it easier to troubleshoot and program the Arduino. You can see how it goes together from the circuit diagram the overlay diagram and the photos. The SD card module has two rows of pins and each pair is wired together so it can plug straight into the breadboard.

If there’s a tricky part of the circuit it’ll be the diodes connecting the Arduino to the SD card module. It may look like the diodes are facing the wrong way but they’re not. We’ve got a small problem in this project that the diodes are helping to fix for us. Basically the Arduino runs on a 5V logic level (that means the digital outputs swing from 0V to 5V) but SD cards only run on 3.3V. If we feed 5V into the data lines of the SD card module we risk blowing up the card.

Electrical engineers would argue that this is a dodgy fix and we should be using a dedicated level translator chip like a 74HC4050 and they’re right. The diode option does work although as we’ve discovered not reliably. We tested it with half a dozen different SD cards and found two of the six worked well one sort of worked and three didn’t work at all. Some SD cards expect to see digital signals that snap between 0V and 5V in no more than five nanoseconds while others are more tolerant and they’re the ones that work.

The SD card module talks to the Arduino over the SPI (Serial Peripheral Interconnect) bus but SPI is really just a 1-bit economy mode interface that’s easy to implement whereas SD cards normally communicate over a 4-bit wide bus. Combine our low-level translation circuitry with the fact that not all SD cards do SPI well and that unfortunately limits the cards we can use. We recommend Class 2 or Class 4 SD cards that are preferably 8GB or smaller. You can try larger Class 4 cards (we’ve used a 32GB card successfully) although you’ll need to make some changes to our Arduino code: change the cardType variable from oldCard to newCard . Basically the newer or larger the card the slower we need to run the SPI bus so doing this drops it back from 8MHz (half-speed) to 4MHz (quarter-speed). Any slower than 4MHz however and the data rate becomes too slow and you can hear the continual jitter in the sound output. We purchased new 4GB and 8GB Class 4 Verbatim cards. The 4GB card didn’t work but the 8GB card worked perfectly at the 8MHz/half-speed rate.

Our modified SD library still works with all existing Arduino programs (sketches) but adds a new instruction that allows us to adjust the Arduino’s SPI speed and allow more cards to work.

We’ve also come up with a more reliable option which involves ditching the $1.50 SD card reader and replacing it with a $10 Ethernet Shield that includes a microSD card slot. You remove the components connected to pins 10 11 12 13 and change the sketch by setting the chipSelect variable to 4 (this is marked in the sketch code). You also need to set the cardType variable to oldCard . The Ethernet Shield has the proper level translation built in to reliably work with any microSD card. The Shield sits on top of the Arduino and you use the same I/O pins for the switch and audio out.

Our Auduino player doesn’t have a built-in amplifier yet so we need external speakers and a way of getting our audio signal to them. That’s what the 3.5mm stereo socket is for. We need to solder it up so to do this first grab a couple of Dupont wires. Cut them in half strip the insulation off tin them and solder them to the three tags on the socket. These give us connections to a 3.5mm plug’s tip ring and sleeve (TRS) connections. Given that we’re only using mono audio we feed the audio output to both channels so when you plug in the 3.5mm cable to your stereo amplifier you’ll hear sound coming out of both speakers.

With the rapid development of GPS (Global Positioning System) techniques, GPS gets wider application in many fields. GPS has features...