This is my second article relating to the Arduino Microprocessor Platform. The first one was a simple implementation of the SIMON game using the Arduino. The article can be found here.
For an introduction to the Arduino Hardware, see jeffb42‘s excellent articles, as there is no point in repeating things here.

What Is This Article About?

In this article, I am going to introduce hardware interrupts, and how they can be an important feature of the Arduino Platform.

What is an Interrupt?

Interrupts are a method of signaling to the microprocessor that something has happened. However, you may ask yourself, is that not what happens anyway when you use a digital input, etc.? Well quite simply – No.

When you use the likes of a digital input, you will typically read its value by issuing an instruction, then act on the read value by using some form of logic, i.e. the code is polling for a value. 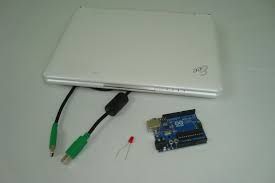 By using an interrupt, the code is literally interrupted, and forced to branch off and do some other execution, i.e. the state change on the input is not ‘missed’. So interrupts are like a hardware trigger.

What Benefit Are They?

Interrupts can help solve timing issues which may occur within your code/hardware setup. You may have had timing issues already and just not understood what happened. How many times have you said to yourself, “Why didn’t that fire?” or “It worked last time I ran it. What is different?”

Getting Down To Business

I am using the Arduino Duemilanove Board for this example, and will be using the Release 18 of the development IDE. This can be downloaded directly from Arduino.cc.

If you are using a different type of Arduino Board, you will need to check out the specs to see which pins are which, as the different types of board can have different allocations and numbers of interrupts/digital pins/analog pins, etc.

On the Duemilanove, there are 2 hardware interrupts available. These are located on Digital Pins 2 and 3. In this demo, we will use Pin 2, and also use Digital Pin 4 as an output to control an LED. The schematic for this is shown below:

Set up the Arduino as per the schematic and upload the code below to the microprocessor. Here you read the value of an input, do a conditional comparison, run some lengthy routine and repeat.

This will give unpredictable outputs on the LED due to the lengthy process being at an undetermined point in relation to when the input button is triggered. Sometimes the LED will change state immediately, other times nothing happens, and then sometimes you need to hold the button for a while for the state changed to be recognised. [This is code PART A in the downloaded source file.]

Making Use of Interrupts

We will use the same schematic diagram and modify the code to make use of hardware interrupts. Now when you upload the code, the LED changes state whenever the button is pressed even though the code is still running the same long delay in the main loop. [This is code PART B in the downloaded source file.]

The attachInterrupt(param1, param2, param3) requires 3 parameters, these are;

The Arduino can listen for 4 types of condition changes. These are: