Skip to content
This instructable was created to be entered in the Robot Challenge. If I win, the parts will of course, go into robots like this one. Notes on how to include some of the very components in the prize packages are given in the last step. I am 28, so of course, I’m not going for the student prizes.

I created this as a simple project for those just starting out in robotics. It is relatively inexpensive, requires minimal tools and is easy to build. Once finished you have an expandable robotic platform that fits in the palm of your hand and can be easily programmed in the Arduino environment.

Here is is driving in a triangle, without any special add ons

In the instructions I’ll walk you through how to:

For the basic platform the following supplies are needed:
an Arduino nano
a small rechargeable battery
a pair of 9 g servos, modified for continuous rotation
part of a Tamiya track set
a 40 pin dip socket
a rubber eraser
some zip ties 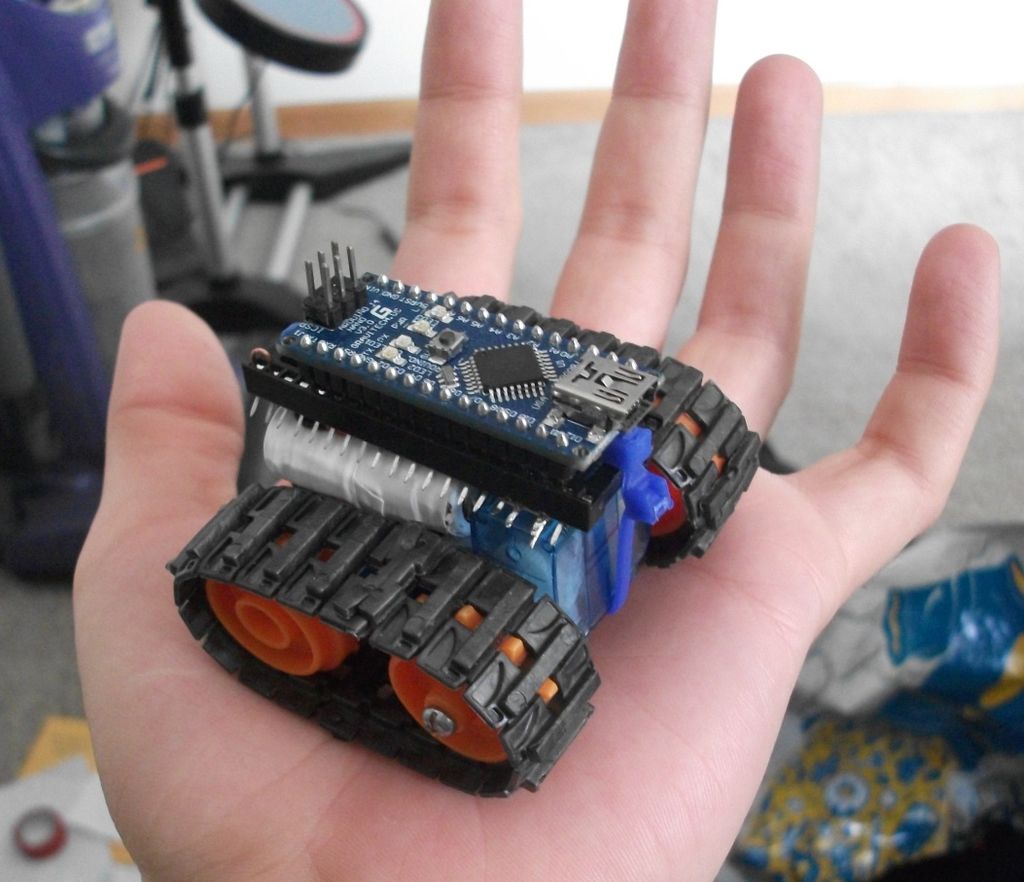 Micro servos modified for continuous rotation are the heart of this design. They give you so much of the hardware; the motors, the gearbox, the driver and control circuitry, all in a tiny cheap package, and in this implementation they also act as the frame of the robot (seen in the next step). There are many instructables on modifying servos for continuous rotation. But here is how I did it for the micro 9g servos I am using.

Any battery which fits on the chassis would work

I went with NiCd because I had some old cordless phone batteries with 1/3 AAA cells in them that I could make into the roughly 5 V packs I needed. Each cell is 1.2, so I used 4 to get 4.8 v. They also don’t require special circuitry to charge.

If you can get a LiPoly and a charger, like the kind they sell on ebay for syma 107 helicopters I think that would work well too.

The photos explain how I did this better than words can:

For this battery the easiest charging method is to connect gator clips to the outputs of a 1.5-9V NiCd charger, and to the leads of the battery. See the wiring diagram in step 4 for how this can be accomplished when assembled.

Step 4: Construction: Connect the wires to the socket 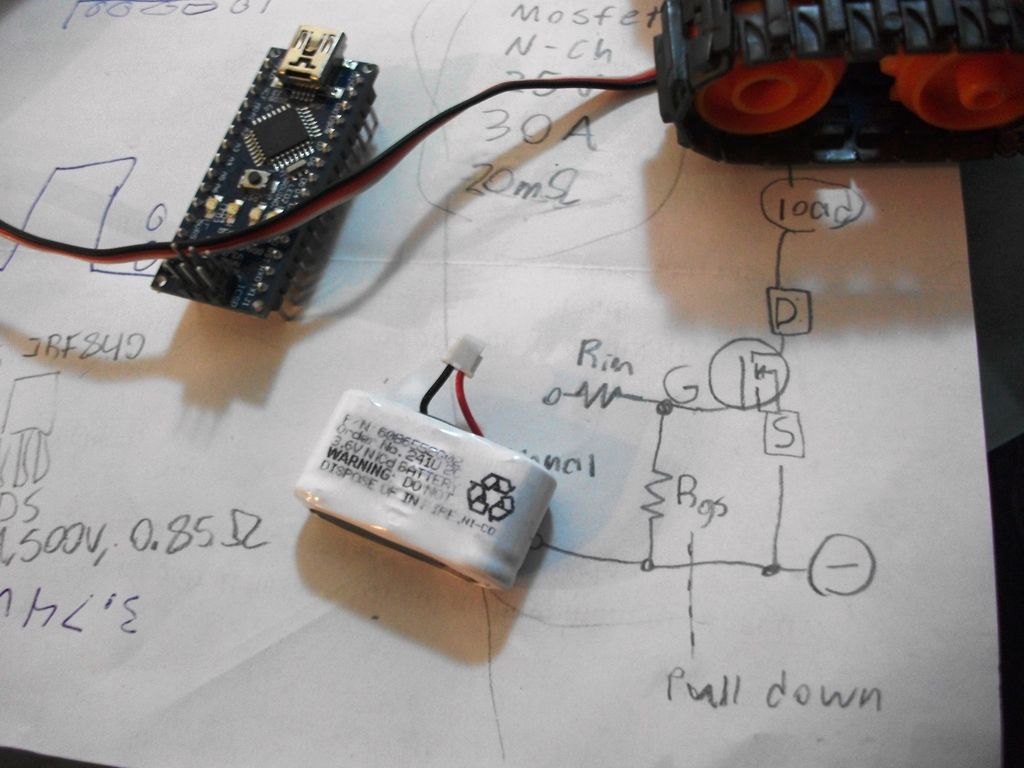 A socket is used to mount the Arduino Nano to the robot, besides making the Arduino removable so that it can be used for other projects, this simplifies attachment to the rest of the machine. Alternatively you could buy a small breadboard for $4 (as shown in the second picture below from sparkfun.com) and zip tie it to the top in a similar way for more modular design.

In my case I wired the servos into D11 and D10, but you could use any of the PWM outputs, as shown in the first picture below. I then wired the battery to a free pin on the socket in between pins that I wired to the power for the arduino (Vin) and the servos, so that I could switch them on and off with jumpers. I smashed the legs of the socket outward so they are easy to access for expansions. Notice that this  placement also makes the USB connection and reset buttons easily accessible, at the end of the robot.

To charge the battery, power can be applied by putting the jumpers in the off position (stored on the other side of the socket) and plugging charging leads into battery +, and ground. Again, for this battery the easiest charging method is to connect gator clips to the outputs of a 1.5-9V NiCd charger. If you are using a different type of battery charge accordingly.

Here is where the eraser comes in. If you have the assembled servo/wheel sets from step 2, you can put the belts on them with the servo that has a wire coming from the side upright and the other laying with its long end pointed toward the upright one, as shown in the fist picture. Pull them to light tension, so the belts are nearly flat but not taught, and measure the gap between the servos. Cut a section of eraser to wedge in this gap. This works like suspension, allowing the frame some flexibility while holding it in place under most forces it will encounter. It’s the white part in the picture.

The battery fits in the crook between the upright and flat servos and the socket sits on top (second picture). Make sure the sockets legs are smashed outward for easy access. Then use one or two zip ties to strap the whole thing together, be sure the buckle is on the front or back, not underneath or above the socket, you don’t want it to get in the way of ground clearance or plugging in the Arduino. If you are using the mini-breadboard variant, you may need to file the middle channel a bit deeper for the zip tie to set in.

Finally, plug in that Arduino (third picture), you can make the jumpers by simply bending some stripped wire with pliers.