Harsh new rules at work getting you down? Overtime sucking the life out of you? Or maybe things are great, either way now you can show your co-workers and management exactly how you feel about your job without a single meeting, memo, or team bonding exercise. This is the Quality of Life Meter. Boss take credit for your hard work? Turn it down. Get a bigger bonus than expected? Turn it up. 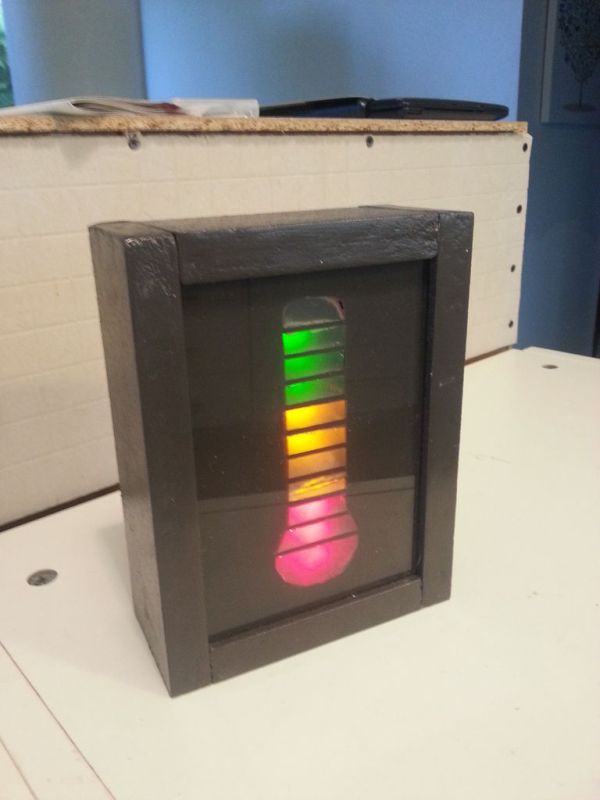 There is no exact formula for the Quality of Life Meter, the whole idea is that it’s a personal thing. That being said on my project we use it as a measure of the groups level. Things like taking a day off, long weekends, cancelled meetings, and getting critical data on time make the meter go up while overtime, useless meetings, server crashes, and management trying to dictate our quality of life make it go down. It’s kind of a gut thing and you’ll have to decide for your self exactly what factors into moving your meter.

I won’t bore you with the story of how this came about but I will be clear that in my work place this is clearly a joke and everyone knows it. If you just show up with this one day and set it low feelings may be hurt and people may take it personally. I’m not saying I’m against using this as a tool to vent your frustrations but just make sure your intentions are clear, joke or otherwise.

Of course Quality of Life isn’t the only thing you can use this for, that’s the biggest reason there isn’t a label directly on the box (at work there is a sign over it but there’s a strict no photo rule so I can’t show it). It could jazz up a fundraiser, track your exercise, or help you save up for a trip. The Arduino that powers my design is far from working at capacity so there is the possibility for expanding the meter by adding sensors that can directly control the output value or adding WiFi or Bluetooth connectivity allowing your phone or computer to influence the output.

As always, feel free to ask any questions in the comments or via PM and if you make one, or a variation, I love to see pictures. 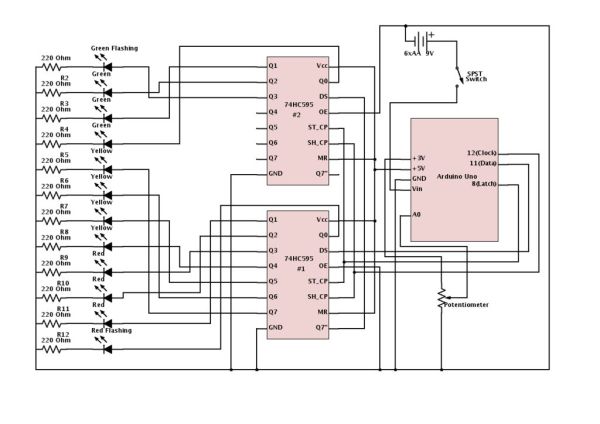 The circuit is relatively straight forward even though the circuit diagram looks pretty messy, there are a lot of connections. Initially I was trying for a 2×6 multiplexed array using a single 595 chip. This turned out to be very hard to program and it may be impossible as I tried several things that I really felt should have worked, at least partially, but got zero results. It worked fine on LEDS 2-11 but the issues start cropping up when you try and integrate flashing LEDs into the circuit. Physical flashing LEDs, like I utilize in the current circuit, don’t work because the current is cycling on/off and the LED never has time to get to the off phase, making them stay on constantly. Software solutions designed to make a standard LED flash resulted in similar abject failures. If anyone can whip together a working proof of concept I’d be very interested to see it. After several frustrating weeks spent bug hunting, troubleshooting, and reconfiguring I realized I had a second 595 so I moved to a new circuit with the two 595’s daisy chained to get the required number of outputs.

The 74HC595’s are serial-in-parallel-out shift registers. This means you can use three pins on your microcontroller to send the bytes of data serially (one bit after another) to the 595 which then applies each bit to different output pins and then outputs those bits in parallel (all at once). When you daisy chain 595’s you can now send two bytes of data and the first 595 then passes the first byte onto the second 595 and they both execute all 16 bits at once.

*The potentiometer takes 3.3V from the Arduino and runs back to the Arduino ground. The sweep, or output, is connected to the first analog pin on the Arduino, A0. I don’t know the value of the pot as it’s a salvage but it is pretty small in size and made out of plastic so it can’t be anything crazy.

*The power source is 6 AA batteries, providing ~9V, in a holder that uses a 9V battery clip as leads. The positive terminals pass through a push button SPST to the Vin pin on the Arduino. The plan is to use rechargeable batteries to cut running costs.

*The LED array is simply a parallel array, one LED and resistor per row. All the resistors tie to the common ground. The size of the resistor needed depends on the specs of your specific LEDs. Use R = V / I, where R is the size of resistor needed, V is the voltage passing through the LED (5V if you use Arduino), and I is the acceptable current for the LEDs. 220 Ohm resistors will work well for most standard 5mm LEDs.

The enclosure is a simple wooden “picture frame” with a glass/plastic face and a cardboard back. The size of the enclosure was determined by the glass pane I found and the depth was set by the width of the scrap wood  was making it with. The window is held in place by a groove cut into the frame and the backing is simply screwed into place.

To create the thermometer outline I simply scaled free a clip art picture to fit on the window. Before you start finalizing your circuit and soldering it into place you need to know the final size of the image so that you can get the spacing of the LEDs correct.