In this project, we will go over how to build a carbon monoxide sensor circuit with an Arduino. 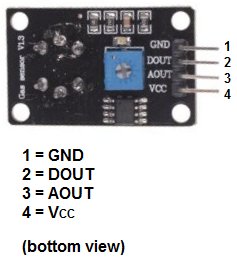 The carbon monoxide sensor we will use is the MQ-7 sensor. This is a sensor that is sensitive to effects of CO.
Carbon monoxide (CO) is a very dangerous gas which is odorless, colorless, and tasteless, so it cannot be smelt, seen, or tasted. A person really would have no idea that they are breathing in CO besides the fact that they would start to feel horrible. The most common symptoms of CO poisoning is headache, nausea, vomiting, dizziness, fatigue, and a feeling of weakness. Neurological signs include confusion, disorientation, visual disturbance, syncope, and seizures.
Carbon monoxide is produced from the partial oxidation of carbon-containing compounds; it forms when there is not enough oxygen to produce carbon dioxide (CO<sub2< sub=””>), such as when operating a stove or an internal combustion engine in an enclosed space. In the presecne of oxygen, including atmospheric concentrations, carbon monoxide burns with a blue flame, producing carbon dioxide. So it is really in enclosed spaces with partial oxidation of carbon products that creates the danger of carbon monoxide production in homes or in businesses.
Carbon monoxide poisoning is the most common type of fatal air poisoning in many countries. Being colorless, odorless, and tasteless, it is very hard to detect but highly toxic. Carbon monoxide is absorbed through breathing and enters the bloodstream through gas exchange in the lungs. CO combines with hemoglobin to produce carboxyhemoglobin, which usurps the space in hemoglobin that normally carries oxygen, but is ineffective for delivering oxygen to bodily tissues. This leads to oxygen deprivation, which can be deadly.
CO is measured in parts per million (ppm). To give you some perspective, the natural atmosphere is composed of 0.1ppm. Ther average level in homes is 0.5-5ppm. The level near properly adjusted gas stoves in homes and from modern vehicle exhaust emissions is 5-15ppm. The exhaust from automobilies in Mexico City central area is 100-200ppm. The amount of CO that can be created from the exhaust from a home wood fire is 5000ppm. Concentrations as low as 667ppm may cause up to 50% of the body’s hemoglobin to convert to carboxyhemoglobin. A level of 50% carboxyhemoglobin may result in seizure, coma, and fatality.
In the United States, OSHA limits long-term workplace exposure levels above 50ppm.
According to the Florida Department of Health, every year more than 500 people in the United States die every year from accidental exposure to carbon monoxide and thousands more across the US require emergency medical care for non-fatal CO poisoning. These products include malfunctioning fuel-burning appliances such as furances, ranges, water heaters, gas and kerosene room heaters, fireplaces, and charcoal that is burned in homes and other enclosed areas. Still others die from CO produced by non-home products, such as cars left running in a garage. The Centers for Disease Control and Prevention estimates that several thousand people go to hospital emergency rooms every year to be treated for carbon monoxide poisoning.
Carbon monoxide can be measured through laboratory testing requiring a blood sample (arterial or venous) and can also be analyzed on a CO-oximeter.
Having this overview of carbon monoxide gives some background to how it is created and the real severe dangers it can pose. It creates context to just how important it is to be able to detect and measure the amount of CO that may be present in the environment during any given time.
Knowing this, let’s go to building our carbon monoxide sensor circuit.

The MQ-7 can be obtained very cheaply, just a few bucks. A good place to look for it is on ebay, which always has auctions on them for the $2-$3 range. 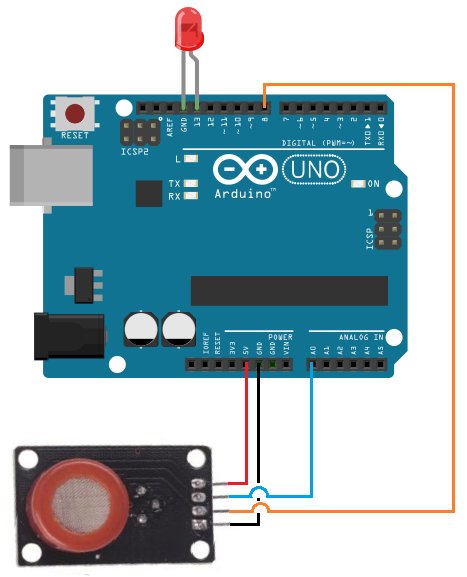 Important, it is recommended that you do not obtain the standalone sensor but the whole MQ-7 board. This is because if you buy the standalone sensor, you will have to finish building the whole schematic before you can connect it to the arduino. So that less work is required for integrating it with the arduino, it is recommended that you buy the complete MQ-7 sensor circuit. This you can see below.
If you buy the complete board, there are 4 leads which need to be connected.

The +5V and GND leads establishes power for the alcohol sensor.

The other 2 leads are AOUT (analog output) and DOUT (digital output). How the sensor works is the terminal AOUT gives an analog voltage output in proportion to the amount of carbon monoxide the sensor detects. The more CO it detects, the greater the analog voltage it will output. Conversely, the less CO it detects, the less analog voltage it will output. If the analog voltage reaches a certain threshold, it will send the digital pin DOUT high. Once this DOUT pin goes high, the arduino will detect this and will trigger the LED to turn on, signaling that the CO threshold has been reached and is now over the limit. How you can change this threshold level is by adjusting the potentiometer to either raise or lower the level.

The carbon monoxide sensor circuit we will build with an MQ-7 sensor integrated with an arduino is shown below.

The connections are pretty basic.

The other 2 connections are the analog and digital output of the sensor. These connect to analog pin A0 and digital pin D8, respectively.

The code which we need to upload to the arduino so that it can measure carbon monoxide levels is shown below.

void loop()
{
value= analogRead(AOUTpin);//reads the analaog value from the CO sensor’s AOUT pin
limit= digitalRead(DOUTpin);//reads the digital value from the CO sensor’s DOUT pin
Serial.print(“CO value: “);
Serial.println(value);//prints the CO value
Serial.print(“Limit: “);
Serial.print(limit);//prints the limit reached as either LOW or HIGH (above or underneath)
delay(100);
if (limit == HIGH){
digitalWrite(ledPin, HIGH);//if limit has been reached, LED turns on as status indicator
}
else{
digitalWrite(ledPin, LOW);//if threshold not reached, LED remains off
}
}

The next block of code sets the baud rate and declares the DOUTpin as input and the ledPin as output. This is because the sensor is an input to the arduino for the arduino to read and process the sensor value. And the LED is an output will serves an indicator if the sensor has detected alcohol.