This instructable is not complete, I will post code soon

This instructable shows the process of building a robotic arm using servos, Arduino microprocessor, a gyroscope and multiple bend sensors.

The user wears a glove containing the gyroscope and bend sensors which translate the movement of the users hand into motion of the  servos , in turn rotating the wrist and hand of the robotic arm.

The Hand also has movement of the fingers, this is limited as a result of the brittle material used.

All movement is provided by the Servos attached to an extension wire or piano wire. Each having different torque depending on its position.

The fingers contain touch sensitive resistors which provide haptic feedback and allow the user to know when the fingers have grasped an object. 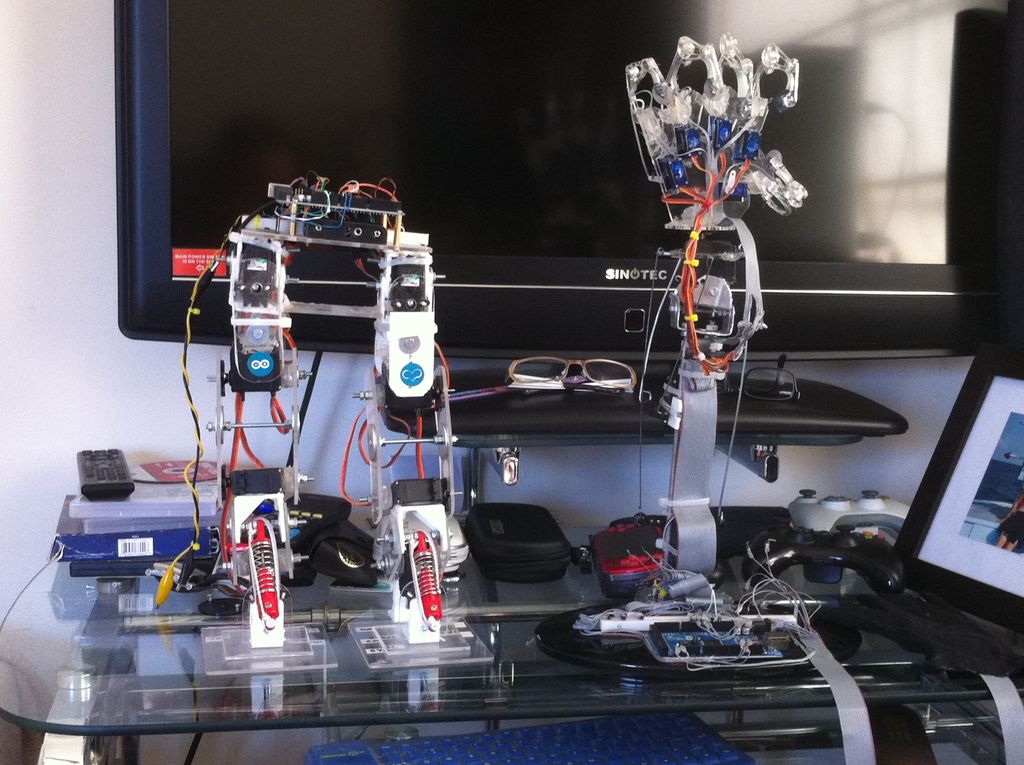 Attached are pictures of the design using ‘google sketchup’.

I found this design of the finger on the net which allows a single servo to provide full motion of curl of a human finger.The design works best when Aluminium is used for the cut outs of the fingers, but as I had perspex available I went with the weaker option which resulted in brittle fingers.

All the fingers are the same design but a variation of measurements, except for the thumb.  they can be found below:

The designs below are the ones I sent through to a laser cutter here in Johannesburg for about R350 for all cuts and material.
they required the files to be sent in 2d DXF format, so if you alter the design in sketchup, make sure you export it in the correct format.

The rest of the cut outs are made up of wrist and palm sections.
index finger, middle finger, ring finger is roughly the same size.

pinky is slightly smaller than other fingers.

– Bend sensors/Resistors x5 (or 6 if you wish to build an elbow).

The best way to attach the finger joint together is with grommets, this allows for movement of the joints.
I used small bolts and a glue gun which provided too much friction and the joints wouldn’t work as intended. Any pressure applied resulted in the perspex fracturing. I decided to remove the joints and have the finger move as one unit.

– Attach the fingers into the slots of the palm cut out. Img[2]
– Attach the servo arm to the smallest disk and bolt  the arm to the servo.
– Glue the palm onto the smallest disk to provide the wrist section, add supports for strength.
– Glue the servo to the larger disk with the rectangle cut out , this separates the hand from the lower wrist and allows for 180 degree rotation. Img[3] 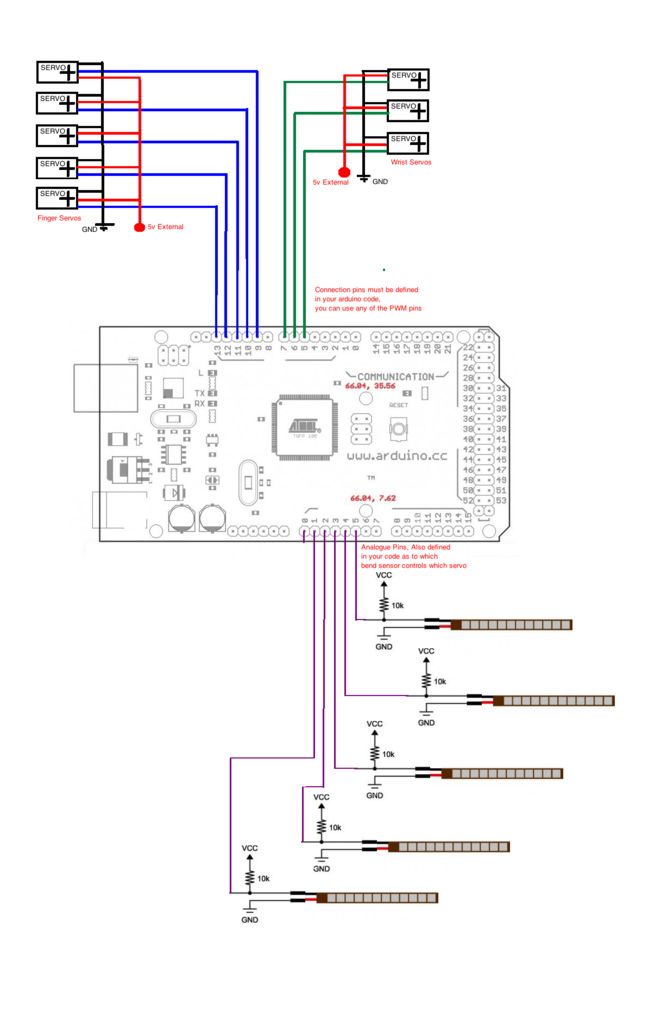 The wrist joint needs to act as a ball joint, with radial and ulnar deviation ,flexion and extension. This requires 2 Servo brackets which I made from aluminium. One within the other, rotating about a bolt , providing 2 degrees of freedom. Attaching the rotation servo to the upper bracket with a plastic bracket mimics the movement of a human wrist.

I used Rod bolts as the forearm structure to act as the radius and ulnar. Attach these rods to the wrist joint by drilling two holes in the lower aluminium bracket and tightening them with nuts on either side.

cable tie the leads of the servo to one of the rods.