It would be a really good idea to build this circuit before going to the lab because it is time consuming to connect all of the wires.

The circuit here is CIRC-05, from your book. For formality, the schematic diagram is the following:

The code for this circuit is available at the following address: http://ardx.org/src/circ/CIRC05-code.txt

You can use Command-a to select everything, Command-c to copy from your Safari window, and Command-v to paste it into your Arduino window.

The code that immediately runs looks like this (notice that some functions are missing):

If you recall, last lab involved eight LED’s and used eight output pins (one for each LED). To expand this circuit to 16 LEDs, you would use 16 output pins. Do you detect a problem with this? (remember we only have 14 output pins).

This week, we have the same number of LED’s (eight), but we only use three of the output pins. The magic that makes this happen is the Shift Register. In fact, you can chain shift registers together to control multiples of eight LEDs (for instance 16, 24, 32, etc) and still only use three output pins.

WOW…Let’s find out how this magic Shift Register works.

The concept of a shift register, brings to mind the nursery song: http://www.youtube.com/watch?v=WqF0ev8UOB4. Well, it’s not quite this idea. But now that you have this ridiculous image in your head, you might remember the concept behind shift registers.

The idea is that a “rollover” occurs and one on the edge falls out. The part that is missing in this idea is that there are others that are added to the other side. Bits (sequences of 1’s and 0’s) are the things that perform the rolling over. For instance, if we start with a pattern like this:

and want to end up with this pattern:

The sequence of “shifts” (the more technical term for “rollovers”) could be represented as follows. Notice that the movement of the bits is toward the left.

We can also imagine that there is some “bell” or alarm that triggers this shift to occur. This “bell” is actually referred to as a clock. The change in the clock from LOW to HIGH is the trigger that causes the shift to occur.

2.2 What is a Shift Register

Let’s look at a diagram and examine the pieces of a shift register:

The pieces of this diagram that are data related are:

The pieces that are power and ground related are:

The remaining four pins are used to control the pattern in the shift register:

2.3 How the Arduino Controls the Shift Register

In our implementation, we have three pins connecting the Arduino to the shift register:

These three are related as follows:

When the signal on the SH_CP-pin goes HIGH, all the values get shifted and a new value (from DS) gets shifted in. When you want the “pattern” that has been created to be output, you must also change the ST_CP pin to HIGH. This updates the output-pins with the new data.

If you are interested and would like to see the step by step interaction of these pieces (with the patterns from Section 3.1), some code is available for you in this file: shift_ Clocks.html

Let us take a look at the partial code that runs when we copy code from http://ardx.org/CODE05

Notice that the updateLEDs function is called from loop. There are a couple of special functions called that relate to the shift register:

Notice how value is 0 to 255, and we can see how the light pattern changes. A bubbly effect is created(no, this isn’t the technical term).

If you were overwhelmed by this talk of bits and bytes, let us take a closer look at binary numbers which are the magic behind making this code work. 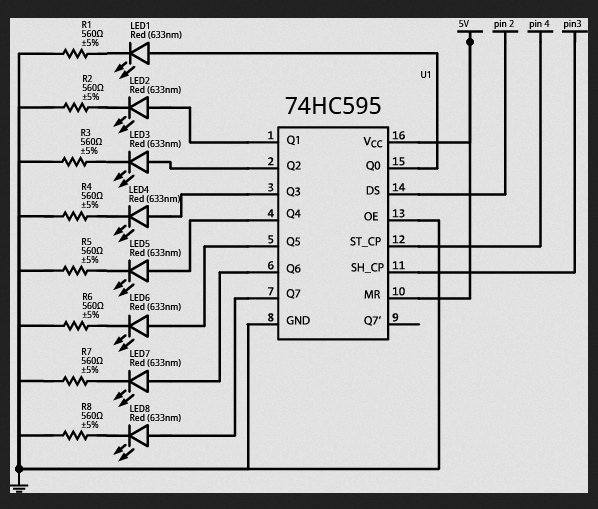 Usually if you take a low level programming class such as CS201, you are requested to memorize at least the first 16 values in binary. The following table summarizes this:

What is the point of this. Well, notice the bubbly pattern that happens. If you are having trouble matching the binary numbers in the table with what is happening in the Arduino, change the for loop in the loop function from 256 to 16 and increase the delay time(to say 400). You should then be able to clearly see the binary patterns in the table above. The 1’s will be represented by an on LED and the 0’s by an off LED.

So, now some terminology: