Here is my instructable on how to construct a pretty simple (for some!) short range infrared rangefinder/range sensor. Infrared rangefinders are very useful in a number of projects. The majority of these come from obstacle detection (in robots) or generally detecting distances! The one shown here is only a simple rangefinder and will only really be able to measure about 6 or 7cm infront of the range finder. Luckily, most objects reflect infrared well enough to produce a reading (including a hand, paper and tin foil). I will be showing you how to use the infrared range finder with an Arduino and ways of linearizing the result. 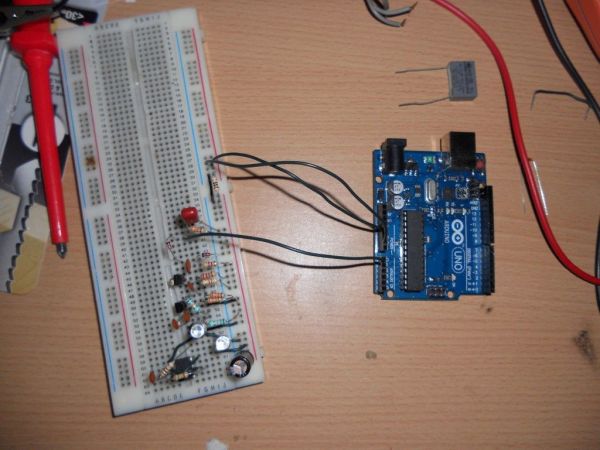 The theory behind an infrared rangefinder is that pulsed infrared is emitted from an IR led and then reflected back off an object into an IR receiver. As light adheres to the inverse square law which states that as distance from a source is increased, the intensity decreases by the square (Source: http://hyperphysics.phy-astr.gsu.edu/hbase/vision/isql.html). Essentially, the light is emitted by the infrared LED, which then bounces off the object. In the first instance, the LED is the emitter and the reflective object is the observer. Once the light hits the object, it then bounces off and is reflected back to the IR receiver. The object is then acting as the source of light so the inverse square law takes effect twice. This has the problem that the maximum range of the rangefinder is quite short and to increase the range, higher power LED’s would be required.

Another problem that takes affect with light based rangefinders is how it can be affected by ambient light. I fix this in my rangefinder by modulating the emitting LED. Without this modulation, a simple light bulb connected to the mains can affect the result by superimposing 50Hz onto the actual signal.

My rangefinder works through having a  modulated IR source at an ultrasonic frequency, being detected by a IR receiver (IR photodiode) which is then fed into a high pass filter, amplified and peak detected.

The first step is to create the IR transmitter. As a simple transmitter, I’m using a 555 timer as an inverting Schmitt trigger to create an astable oscillator. Using the 555 timer in this fashion reduces the amount of components required to one resistor and one capacitor. Using a 555 timer isn’t particularly stable as the tolerance of both capacitor and resistor affects the frequency, along with temperature changes. Since the infrared receiver is then only high pass filtered, as long as the filter cut off frequency is below the operating frequency of the transmitter, the filtering properties will work. As can be seen in the schematic diagram, the red section is the transmitter.

With the resistor and capacitor values chosen, the operating frequency will be ultrasonic at a frequency around 46kHz. As stated, this will be both temperature and supply voltage dependent.

It may seem to some that the LED is operating at a current higher than normally specified but since the duty cycle isn’t 100% and is being pulsed, the average current will be below the specified 20mA. When building this section, a 100R Resistor was used.

The phototransistor I used was the L-53P3C bought off eBay for a very cheap price. Any suitable photodiode or phototransistor can be used, just ensure that the spectral response matches that of your IR transmitters. Using a IR filtered photodiode/phototransistor will be even better.

The data sheet states that the maximum on current is 1mA meaning that the worst case scenario will be with current flowing directly through the 18k resistor, into the photodiode and directly from the transistors base to ground, equivalent to a current of 4.3/18000 (4.3 coming from the 5v power supply, minus the 0.7v base to emitter drop, this is as if the transistor was not conducting current through the collector). This gives us a maximum worst case current of 0.238mA, well within the specified current.

The phototransistor I used was bought from:
http://www.ebay.co.uk/itm/Infra-Red-Remote-Phototransistor-Receiver-L-53P3C-/200648166002?pt=UK_BOI_Electrical_Components_Supplies_ET&hash=item2eb7900a72