Clock with Tics is an Arduino-powered 24-hour digital clock that displays expletives at random intervals.

A clock ‘ticks’. A ‘tic’ (note the different spelling) can be a mental disorder and can manifest itself in a number of ways; most seriously, someone suffering from “Tourette’s Syndrome” will blurt out swearwords involuntarily. I had thought of titling this piece “Time for Tourettes”, but the clock itself is tasteless enough. 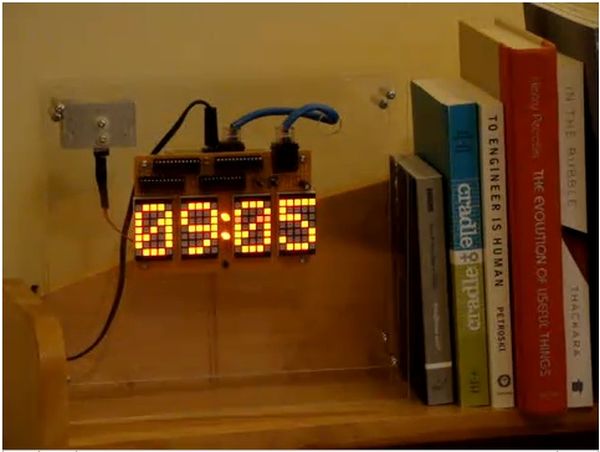 This artifact is part of my series “The Technology of Good Intentions” which focuses on ‘failure’ in design. In this case, who has not had an electrical widget that has ‘gone on the fritz’ and suffers from momentary lapses?

The Arduino code for this project is available under a Creative Commons Attribution-Noncommerical-Share Alike 2.5 Canada License. Most of the electronic parts were obtained from futurelec.com and seeedstudio.com. The circuitry is split between two boards: the ATMEGA168 controller using the Arduino bootloader and clock chip/battery is separate from the four-digit display. Power is provided by a 9 volt 650 mA power supply. The 7805 voltage regulator runs quite hot and because of this it is mounted separately with an aluminum heat sink.

The clock is a DS1307 with a small battery backup to hold the correct time when the rest of the unit is without power. Each 5×7 LED display matrix is driven by a MAX7219 chip. The schematic for the entire clock is below.