What a girl wants. What a girl needs.  What’s more exclusive and has more cachet than scoring a Birkin bag? Pow!!! A Batgirl Birkin bag! Holey Haute Couture, Batman! 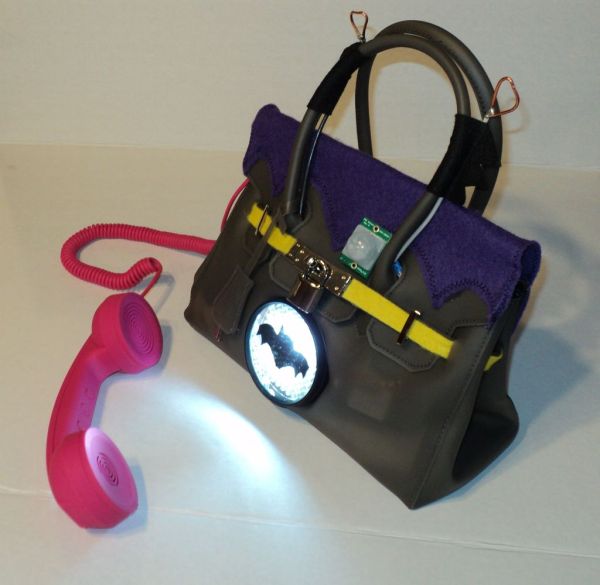 Yes, you too can knock off a version of this famous bag.  Okay, even mine started out as a knockoff so you ain’t doing anything iffy by copying another knockoff. No need to worry about the caped crusaders coming after your Fn a… wait, maybe they need it for a costume party.

This concept is based on the Batman television show from the mid 60’s that I grew up on.  That is the classic TV Batman. From that, is the classic TV Batgirl which provides the inspiration for this purple piece of couture and handbaggery.  I think the Iron Lady would have carried one of these.

The song played by the Flora at the end is low in volume as the camera didn’t really pick it up.  Kinda like the hearing test you get in school.  Raise your hand if you hear the tones. 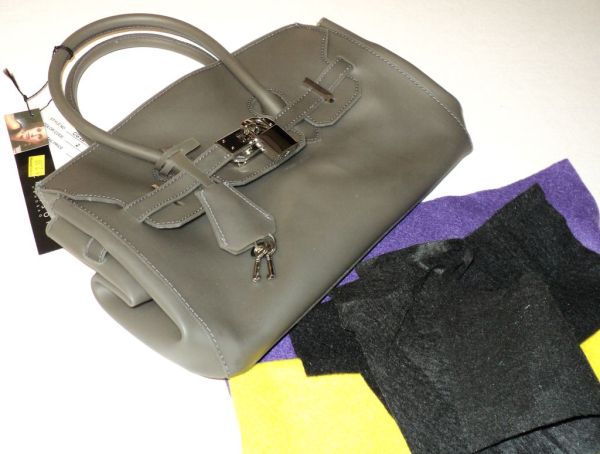 Find yourself a Birkin-like bag to modify.

This is actually a bag I found in one of my discount store runs.  It is all plastic so I guess PETA friendly unless you count the dinosaurs.  No, I don’t carry a purse. Just got it because I can make something out of it.

The plastic material is naturally translucent so you can illuminate it from behind.

You will also need:

Some purple fabric for the header.

Some yellow and black felt for  trim.  Yellow duct tape would just cheapen it.

A flashlight capable of megalumens of illumination. I got my mega-LED flashlight at our favorite import tools store Port-of-Call Parcels.

A length of 12 AWG normal household wire for the TASER probe.  You don’t want your wire overheating causing a hazard when all that juice is flowing through the wire to the perp.  If you are a contractor, you might substitute with the nominal 14 AWG.

Some toggle switches to wire up the electronics.

Electronics to provide the flashing alarm and sound player circuit.  I used an Adafruit Flora wearable Arduino board that I previously used for my TARDIS IKEA shopping bag.

I’ve been playing around a lot lately with the Adafruit Flora microprocessor board designed to be used for wearables.  It’s an Arduino derivative so it can control things like LEDs and be programmed to play musical tones.

Since I was in a rush to put this together,  I hobbled bits of code together.

First, I needed an piezo speaker. I gutted out one from a carbon mononxide detector that was waiting to be recycled.  There are other parts that one could use on there too.  You might want to run the sound through a real amplifier circuit to a real speaker to get better fidelity.

I used the code from Adafruit’s tutorial on how to program the Flora to play musical tones.  I roughly changed the data to play the Batman TV Theme.

I also had a passive infrared sensor (PIR) to use as a motion sensor to trigger my alarm circuit.

Note that I soldered on female headers to my pin pads on the Flora.  I like to create wiring harnesses with my components so they plug in with male header pins.  The Flora is really designed to use conductive thread sewn in to the board but I’m still in the prototyping stage for everything and using alligator clips with jumper wires gets to be a mess.  I used masking tape to insulate the bare parts of the connection since it forms better than using electrical tape on small parts.

I have two LEDs soldered with resistors on cables leading to a common ground and using one data pin on the Flora.

I used stock code to get my PIR sensor working.  It triggers the LEDs to flash, play the song, and flash some more.  It resets waiting for the next culprit to trigger the alarm.

Use purple felt to form a cape cowling for the handbag.

You can trace a pattern from the bag or just drape the piece over the bag to get some cut reference points.

Trace the bat wing shape that fits around the handles and hardware. Do the same for the front and back.

Cut off the excess fabric.

I ran a decorative stitch around the border.

You can attempt to sew the piece to the bag or wimp out like I did and just hot glued the piece on.  I don’t know what is more dangerous, getting napalmed with hot glue or breaking a needle and wedging the bag under the feed dogs of your sewing machine.

Cut some yellow felt strips to fit the belt.  Hot glue in place.

Well, you know where to find “How to build a TASER using an ordinary disposable camera.”

It is dangerous. Don’t try this at home.

I used some heavy duty wire to form some bat ear TASER probes.  The wire end was bent into shape and the copper wire soldered to secure the loose end to the wire.

Position the wire probes along the handle.

Take some black felt and secure the TASER probe to the handle.

Cut out some triangular or more bat-looking serrations in the wing flap that is created.

Step 5: Let there be light…

I got this 109 LED flashlight/torch from the tool candy store.  Not a real Klieg light like the bat-signal but the package boasts that it has 11,000 – 13,000 candelas of blinding power.  The power on switch does give it two modes of brightness. It is hella bright.

Since the base or main body of the flashlight screws off of the LED array, this made it simple to fit in the bag.  You can do some basic rewiring to cut in a switch that we will place on the outside back of the handbag.

Cut out a little felt batman logo to glue onto the face of the LED array.  Since there are no focusing optics, the batman logo will not really show up as a projection or shadow.  Maybe something for the revision.

Trace out a circle a little bit smaller than the diameter of the LED array.  Cut it into radiating pie slits.  You can then push the light into the handbag.  This plastic material gives a bit so it can conform around the LED array.  Use the excess material as taping tabs to secure the LED array in place.

109 LEDs can build up some heat in an enclosed environment.  Don’t keep your bonbons too close inside the bag.