With surface-mount technology pushing the size of components ever smaller, even the most eagle-eyed among us needs some kind of optical assistance to do PCB work. Lots of microscopes have digital cameras too, which can be a big help – unless the camera fights you. 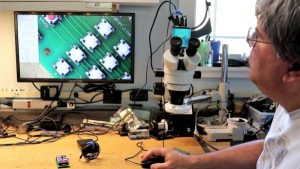 Faced with a camera whose idea of autofocus targets on didn’t quite coincide with his, [Scott M. Baker] took matters into his own hands – foot, actually – by replacing mouse inputs to the camera with an outboard controller. His particular camera’s autofocus can be turned off, but only via mouse clicks on the camera’s GUI. That’s disruptive while soldering, so [Scott] used an Arduino Pro Micro and a small keypad to mimic the mouse movements needed to control the camera.

At the press of a key, the Arduino forces the mouse cursor up to the top left corner of the screen, pulls down the camera menu, and steps down the proper distance to toggle autofocus. The controller can also run the manual focus in and out or to take a screenshot. There’s even a footswitch that forces the camera to refocus if the field of view changes. It looks really handy, and as usual [Scott] provides a great walkthrough in the video below.

Like it or not, if shrinking technology doesn’t force you into the microscope market, entropy will. If you’re looking for a buyer’s guide to microscopes, you could do worse than [Shahriar]’s roundup of digital USB scopes. Or perhaps you’d prefer to dumpster dive for yours.