I have been making my own Arduino’s on strip-board but recently bought some of the Evil Mad Scientist ATmegaxx8 Target Boards.
While they weren’t designed as an Arduino board they are perfect to use as they have:
– places for the crystal and capacitors (XTL and C1, C2) or resonator
– place for the power smoothing capacitor (C3 on the board)
– place for the 100nF capacitor across VCC and Gnd, pins 7 & 8 (C4)
– have 4 prototype spaces on the board which can hold 2x 14pin DIP chips
– has 3 holes per Arduino pin to solder leads to
– has bus lines suitable for 5V and ground 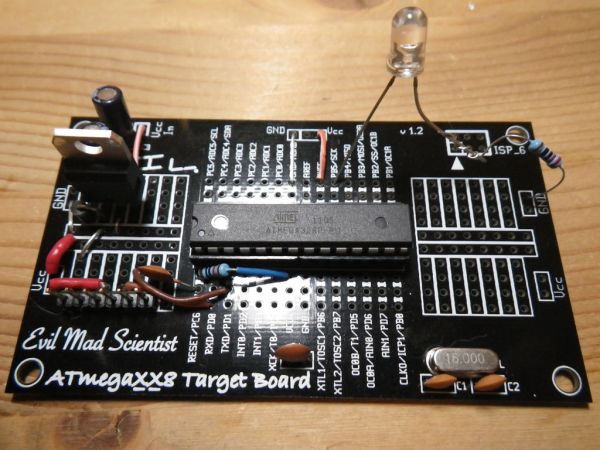 For a schematic I base my build on the minimalist Arduino circuit found at thetransistor.com

For a schematic I base my build on the minimalist Arduino circuit found at thetransistor.com

Solder in the IC socket – I used 2x 14 pin sockets for this build.
Notch to the left. 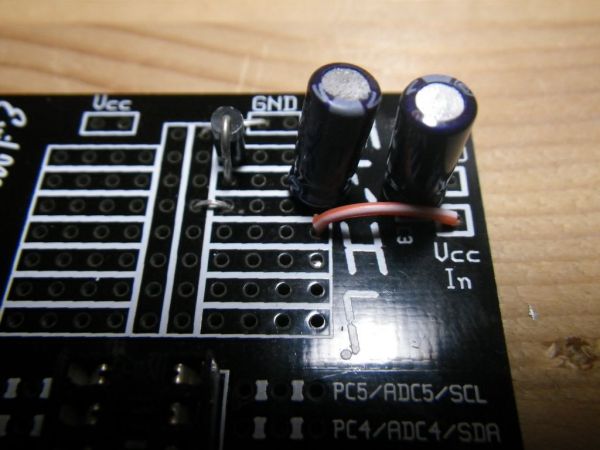 I am using the top left prototype space for the 5V regulator and caps as it is next to where the C3 is.
There are 7 “buses” and I use the first 4.
Starting on the left will be Vin (from wall wart or batteries), then LM7805 Vin, then GND, then LM7805 Vout (5V)
Between the Vin and LM7805 Vin I put a protection diode (IN4001 or similar)
There are 2x 10uF electrolytic caps used for power smoothing – one goes across the LM7805 Vin and GND, the other goes across LM7805 Vout and ground.  One goes on the prototype area, the other in C3.