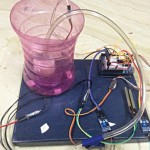 During summers, most people are too lazy to water the potted plants on their rooftop gardens every day. Explained in this section is a simple and exciting plant watering system that you can build yourself in just a few hours. It is an Arduino based automatic plant water-feeder system that uses a soil moisture sensor. The author’s prototype is shown in Fig. 1.

Circuit and working
The circuit diagram of the automated plant watering system is shown in Fig. 2. The circuit comprises an Arduino UNO board, a soil moisture sensor, a servo motor, a 12V water pump and an L293D (IC1) motor driver IC to run the water pump.

You can power the Arduino board using a 7V to 12V wall wart or plug-in adaptor or solar panel. You need a separate 12V battery or power supply or solar panel for the pump motor. 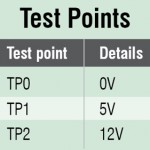 contact soil sensor (as shown in Fig. 3) is used in this project because it has to check soil moisture to measure the electrical conductivity.
The moisture sensor provides an analogue output, which can easily be interfaced with Arduino. In this project, two sensors can be connected to analogue pins, A0 and A1, of the Arduino board. Each sensor has four pins (Vcc, Gnd, Ao and Do) available for interfacing with the Arduino board. Here, digital output pin (Do) is not used. The water pump and servo motor are controlled by Arduino connected to digital pins 3 and 9, respectively. That is, the servo motor signal control pin is connected to pin 9 of the Arduino board.

The program in the Arduino reads the moisture value from the sensor every 20 seconds. If the value reaches the threshold value, the program does the following three things:
1. It moves the servo motor horn, along with the water pipe fixed on it, toward potted plant, whose moisture level is less than the predetermined/ threshold level.
2. It starts the motor pump to supply water to the plant for a fixed period of time and then stops the water pump (refer Fig. 4).
3. It brings back the servo motor horn to its initial position.

The program is written in Arduino programming language. The code is well commented and is easy to understand. Compile the autowatering.ino code and upload it to the microcontroller, using Arduino IDE version 1.

The sensor will calibrate by itself once it is kept in the soil and the threshold value will be shown on the serial monitor in Arduino. Serial debugging is available in this program. Comment out if you do not wish to use the serial monitor.

Construction and testing
An actual-size, single-side PCB layout of the automated plant watering system is shown in Fig. 5 and its component layout in Fig. 6.

Assemble the components on the PCB to minimise errors. Alternatively, you can assemble them on a breadboard or Arduino prototyping shield or a general-purpose PCB. Upload the code to Arduino UNO board and install the sensors in the soil of the potted plants. Do not immerse the sensors fully inside the soil.

Install the pump in a water container (refer Fig. 7) that can hold a few litres of water. attach the water pipe on the servo motor horn as shown in Fig. 8.

You can also add an Ethernet or Wi-Fi shield and use the Twitter library, which will tweet from your plants side to send messages like: I need water, tank is empty, refill the tank, thanks for the water, and so on.

You can also add a 16×2 LCD to indicate moisture levels.

You can also enable the circuit to refill the tank after a few days, depending on the volume of the tank.

The author is a student of applied electronics and instrumentation engineering at JRE School of Engineering, Greater Noida. He likes making projects with Arduino